Evolution Of Dirk Nowitzki: Reflecting On A Career That Defies Narrative

Dirk Nowitzki is on the doorstep of ending the Los Angeles Lakers' dynasty and changing the perceptions of his NBA career. But how did we get to this point with him? Is he really what we think he is?

Share All sharing options for: Evolution Of Dirk Nowitzki: Reflecting On A Career That Defies Narrative

The shot that may have provided the final dagger in the hearts of the Los Angeles Lakers' dynasty probably didn't come the way you expected. You figured it would come thanks to Kevin Durant's pure stroke, Derrick Rose's lightning-fast darts into the lane or maybe even from an emphatic LeBron James slam dunk. But on this night, with the Lakers making one final charge to prevent a second straight home loss, it came instead from a man born two months and four days before Kobe Bryant.

And yes, it was spectacular. How else can you describe the shot Dirk Nowitzki hit to stave off the Lakers' final rally in Game 2 of their NBA Playoffs second-round series on Wednesday night? The Lakers had scored on two straight possessions and were poised to stop Dallas again as the shot clock wound down. Nowitzki was in trouble, and tried to dribble to his sweet spot at the free-throw line. This time, Pau Gasol was ready, reaching his arm as high as he could to contest the shot. But undeterred, Nowitzki lifted his front foot in the air and summoned as much lift as he could, launching a typical moonball in the air. The end result? Nothing but net, a foul, and a potential crisis averted.

Then again, everything about Nowitzki's career arc is confusing. He entered the league as an unknown entity, one of the very first random skinny perimeter-oriented international big men before a flood of random skinny perimeter-oriented international big men entered the league. He's lived with the soft label for so long, despite the way he methodically remodeled his game from the long-range gunner he was early in his career to someone who fights tooth in nail in the pinch post for the half-inch he needs to get his shot off. He's never been a champion, but he's been the best player on one of the league's best teams for a decade. He isn't overly arrogant, humble, personable or prickly. The closest thing to a defining personality trait is his quirkiness, but even that has been overshadowed the quirkiness of a former teammate with one more MVP award than him.

So Dirk really defies classification. Nowitzki's biggest strength -- his consistency -- is also his biggest weakness. It's caused everyone to misunderstand him, because they want to run him through the gauntlet of peaks and valleys we subject star athletes to these days. If the Mavericks end up topping the Lakers, there will undoubtedly be a sentiment that he's overcome the demons of the 2006 Finals and the 2007 upset loss to the Golden State Warriors. But that's only by our subjective goalposts of athlete narratives. For Dirk, things are a little trickier.

If I had to find a coherent flow to Nowitzki's career, I'd focus on three different eras. Not coincidentally, they overlap with his three professional coaches. Here now is a brief summary of the three eras of Nowitzki's career. 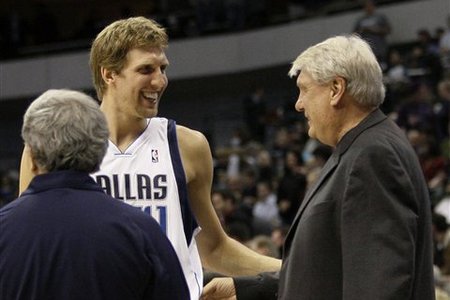 Dirk Nowitzki would not be the player he was without so many things falling into place. Let's start with him as a teenager in Germany. Nowitzki started playing when he was 13 years-old, but experienced enough of a growth spurt to encourage him to play for a second-division German pro team in his hometown of Wurzburg. There, he met trainer Holger Geschwindner, whose unconventional methods sculpted Nowitzki in a legitimate NBA prospect. He punctuated that by dropping 33 points and 14 rebounds in the 1998 Nike Hoops Summit in leading the international squad to the upset, and suddenly, he was being lusted after. The Mavericks acquired him for Robert "Tractor" Traylor, and the rest is history.

Ultimately, it took the NBA's resident mad scientist, Don Nelson, to get Nowitzki on the path to stardom. It didn't look very good early, when Nelson idiotically proclaimed Nowitzki a Rookie of the Year candidate in 1999, setting his lottery pick up to fail. Nowitzki was anointed too early and fell into a deep depression that clouded his rookie season. But luckily, two forces rescued him. The first was Steve Nash, a fellow quirky lost soul that took Nowitzki under his wing and helped him feel more comfortable. Once that confidence returned, suddenly Nelson's mad schemes allowed Dirk's unconventional game to thrive. No other coach then would accept a seven-foot perimeter player, but Nelson encouraged it. Nowitzki was such a lethal matchup that he became a star and Dallas became Dallas.

Unfortunately, Nelson's idiosyncratic style pushed further and further into madness. Duplicate parts eventually surrounded Nash and Nowitzki, to the point where things spiraled out of control (relatively speaking) in 2004 when Nash, Nowitzki, Michael Finley, Antoine Walker and Antawn Jamison were on the same team. This was where Nowitzki got his soft label, but his team around him did no favors. Nowitzki had the league's ultimate Lord of the Flies situation surrounding him, so he got dealt a lot of their labels. Nevertheless, 2004 brought the first real fork in Nowitzki's road, one that shaped the rest of his career. 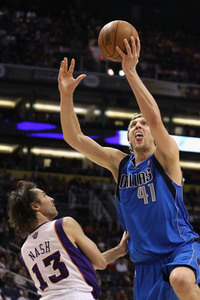 Dirk Nowitzki needed Steve Nash to leave to become who he is today. This was not something anyone felt at the time, but it became reality very quickly. Nash's departure culminated a tumultuous summer of 2004 for Nowitzki, when he was mentioned in trade rumors for Shaquille O'Neal and ultimately lost his closest friend. Those two moments provided a major lesson for Dirk that would stick with him: basketball is a business, and things change.

This also coincided with another huge shift for Nowitzki: the switch from Don Nelson to Avery Johnson as head coach. The two men could not have been more different. Nelson preferred a free-wheeling style that placed Nowitzki on the perimeter. Johnson was a Gregg Popovich-type who preached defense and toughness, almost to a fault. That is how we got to the point where a 5'10'' guy was demanding his 7-footer develop a bit of a mean streak. Whether losing Nash played a role or not, Nowitzki did just that, and suddenly, the free-spirited Mavericks were now the meanest SOBs in the league. We talk a lot about how true superstars buy what their coach is selling, but we forget that no player bought more into what his coach was selling at the time than Nowitzki did. Johnson didn't make Nowitzki tough, because Nowitzki was one tough hombre going all the way back to his pro days as a teenager in Germany. He just convinced Nowitzki that his toughness needed to show.

Of course, we all know how this era turned out. The Mavericks blew their two best chances to win it all, squandering the 2-0 lead to Miami, then exiting to the Warriors the next year. As the narrative goes, Dirk was blitzed first by Dwyane Wade, then by crazy Stephen Jackson. But there were a lot of forces at play. The 2006 Finals was a wacky one, and as good as Nowitzki was, Wade was better. The 2007 first-round series was a little stranger, and one that ultimate led to Stage 3 of Nowitzki's evolution. Nowitzki clearly had his worst playoffs, but there was also a larger problem: his teammates couldn't get him the ball. Chicken (they couldn't pass) or egg (he couldn't get open), that was the reason the Mavericks lost. Combine that with his old coach playing tricks to take away his tendencies, and it was clear a change was needed. 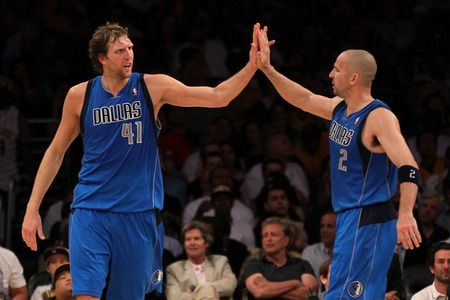 The Jason Kidd trade was unpopular, but it may have helped saved Dirk Nowitzki's state of mind. Even the great ones need some help, and by the end of 2007, it was clear a culture change had to be shepherded again. Avery's band of goons was starting to fray at the edges. Devin Harris and Josh Howard wanted more shots and more recognition, and the masses were getting worn down by Johnson's yelling. It was a repeat of what Nowitzki had to deal with in 2004, only this time, he was dealing with a bunch of young, hungry up-and-comers, not established stars that played his position.

It was all growing on Nowitzki's shoulders, and so, Dallas made a massive change. In came Jason Kidd, in a deal Nowitzki himself advocated. A short while later, out went Johnson, and in came Rick Carlisle. The Kidd move was needed in order to help Nowitzki have some order offensively. The Mavericks had become an isolation-heavy team, and Nowitzki was increasingly required to fend for himself. But the addition of Kidd brought some fluidity back into the Mavericks' offense and allowed for whatever was left of Nowitzki's offensive creativity to resurface. Kidd brought many of the things Nash once did without the threat (or crutch) of being the leader. It was a necessary shift.

Carlisle then completed the transition when he was hired before the 2007/08 season. Nowitzki had learned everything he was going to learn from Johnson by this point. The genius of Carlisle is that he found a happy medium between his predecessors. With Kidd as the engine, Carlisle managed to reopen the offensive playbook and make life easier on Nowitzki. Meanwhile, he preached enough defense to carry over the important wisdom Johnson imparted. It took a little while for Carlisle's methods to show up in the win column, because it required further roster changes that took some time to make. But now, Carlisle has the Mavericks humming along, with the offensive creativity of Nelson combined with the defensive toughness of Johnson. That balance is best exhibited by Nowitzki, who has taken the lessons of his two previous coaches and thrown them into a database of wisdom that comes out at the perfect moment during big games.

And now, Nowitzki's Mavericks are once again legitimate threats to win the NBA title. 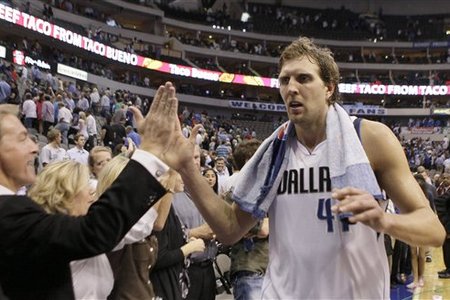 Has Dirk Nowitzki really changed? It depends on how you evaluate "change." If it is by mere performance, then he's mostly been the same superstar he's always been. Over the past 11 seasons, Nowitzki has posted a PER between 22.5 and 28.1 every year. He's missed a total of 38 regular-season games, or less than four per season. He's played in nearly 970 games (including playoffs, not including ones he left early to injury), and has scored in single digits 17 times. It's a run of excellence that is matched only by the very best in NBA history.

If it is by attitude, then I think Nowitzki has changed a lot. Each of these three eras has shaped him and made him the player he is today. Without any of them playing out the way they did, Nowitzki would be a very different player and person. Few have been more adaptive to their surroundings than the big German.

If it's by team success? Inevitably, this is always what it turns into. Nowitzki mirrors the Mavericks in one way: he's been consistently great, but never a champion. If the Mavericks get by the Lakers and win the title, it'll be seen as a seismic shift in his legacy. But if there's any lesson we should have learned from Nowitzki's journey, is that none of it is conventional. There are three separate points where Nowitzki could have been defined by what he isn't, and instead, his will to be consistent, his adaptability and the circumstances around him ensured that would not happen. Now, at age 32, Nowitzki is on the doorstep of ending a dynasty and sticking a new fork in the road of his NBA career.

Let's hope we can all appreciate the journey he has taken before applying a circumstantial label to his name.