Phil Jackson And The Lakers Reach The End: A Story Of Dignity And Disgrace

Phil Jackson says he's coached his last NBA game, but if the Los Angeles Lakers' Game 4 disaster against the Dallas Mavericks is how the empire ends, it's not a reflection on their coach.

Share All sharing options for: Phil Jackson And The Lakers Reach The End: A Story Of Dignity And Disgrace

Phil Jackson told reporters after his Lakers lost to the Mavericks that, "We'll be back Tuesday." That was last Thursday, before the Lakers went to Dallas and dropped two more games to the Mavericks, completing one of the most surprising sweeps in NBA History.

Five days later, Phil Jackson and the Lakers may be headed back to the Staples Center, but it won't be to play the Mavericks or reunite with the reporters Jackson met last week. For Kobe Bryant, Pau Gasol, Lamar Odom and the rest of the players, they'll clean out their lockers and have one, last meeting with management before the summer. For Phil Jackson, he'll clean out his desk and head into NBA hibernation.

So Sunday felt bittersweet. On the one hand, you had an exclamation point on the Lakers' stunning collapse. On the other, you had this lingering question mark—is this really how it ends for the greatest coach in NBA history?

To the first point, this Mavericks series seemed like poetic justice. It's only right that when things went bad for L.A., they went bad in the worst, most embarrassing way possible. The Lakers went down with a giant thud on national television in a game that was over by halftime. It's what we've all secretly expected from the Lakers for ten years now.

Mind you, in the time Phil Jackson's coached the Lakers, you've had Kobe taking shots at Shaq, Phil Jackson writing an entire book taking shots at Kobe, Kobe refusing to shoot for an entire game 7, or more recently, the playful-but-totally-serious analogy that came to define the 2011 Lakers—Kobe as Black Swan, Pau as White Swan. Despite it all, the Lakers won five titles in ten years. A lot more than they should have if you believe in the virtues of Ubuntu...

That's the thing. I never hated these Lakers for winning, I just resented the way they portrayed themselves. Because when they won, it wasn't seen as the triumph of talent over teamwork. Instead, the NBA world would suddenly pretend that Kobe had evolved into the perfect teammate. Or that Pau Gasol wasn't epically soft. Or that someone like Lamar Odom had figured it all out. Or, going back to those early titles, that Kobe and Shaq didn't absolutely despise each other. It's the best testament to Phil Jackson's coaching you'll find anywhere; they won enough to make those lies convincing.

Which brings us to the other side of the coin on Sunday. If the Lakers' loss was a victory for karma, then Phil Jackson ending his career like that seems like some sort of cosmic injustice. It was enough of a shock so that I felt compelled to tune into his post-game press conference on NBA TV, just to see if he could help put things into perspective for me. And of course, he did. 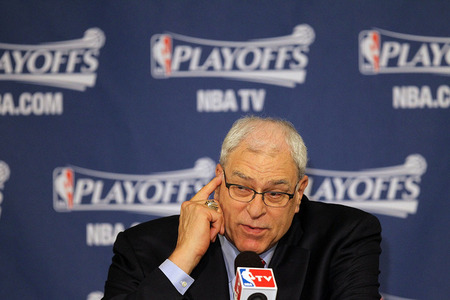 "We'd gone to the Finals, and to go back twice and win it, after losing in '08, puts a lot of strain on a basketball club," he told the media afterward. "From all angles—personalities, spiritually, physically, emotionally. Getting charged up for game-after-game, and assault-after-assault when you go in and play teams. So, it was a challenge, and a challenge bigger than we could meet this year."

Then someone asked him whether this was his final game coaching.

Jackson smirked. "I haven't answered that, have I?"

"But yes, in all my hopes and aspirations, this is the final game I'll coach." Then he smiled again. "This has been a wonderful run," he says, "I go out with a sour note after getting $35,000 by the league, so that's not fun. ... But as Richard Nixon says, 'You won't be able to kick this guy around anymore.'"

In the end, what seemed cosmically unfair was poetic in its own right. Even as his coaching career came to an end with a team that quit on its coach, Phil seemed blissfully detached from all of it, cracking jokes about David Stern and smoking peyote, conceding the torch to younger coaches, and leaving the game with all the dignity that his team lacked.

So maybe Sunday's game wasn't as bittersweet as I thought. There were just two, parallel stories with completely different themes. On one hand, the Lakers' collapse is why we watch the NBA Playoffs. Because anything can happen, and you never know when you're going to witness the end of an era, the beginning of another one, or the rejuvenation of a dream we thought was dead (Dirk!).

Watching NBA History unfold is sort of like watching tectonic plates shift. If that sounds boring and repetitive, that's because it usually is. Gaps between different teams slowly erode over time, but mostly, nothing changes. Or at least, it's usually pretty predictable.

Change happens so gradually you can hardly notice it, and the friction looks mostly incidental as time (and games) passes. For instance, L.A. went to six games with the Hornets in the first round, but we all thought that was a fluke, like when they went to six games with the Thunder before last year's title. Then, just when it seems like the plates will never really move, we get an earthquake like the Mavericks series, and just like that, the landscape looks unrecognizable.

The Lakers turn to shambles overnight, and the Mavericks are the new favorites in the West. That's why we keep watching; for that earthquake that changes everything.

Phil Jackson understands that concept, I think. It's NBA evolution. That's why he refused to lose his cool when the Lakers crumbled, and it helps explain the second story of Sunday's game—that L.A. could go out like this it doesn't taint Jackson's legacy even a little bit. 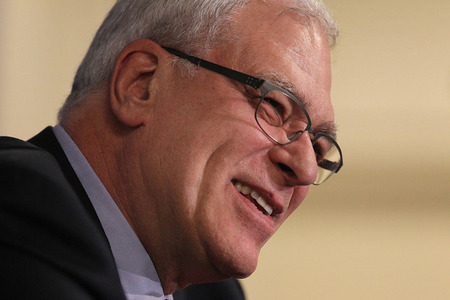 Through all the shakeups over the past 20 years, he's built a resume that's about as rock solid as any coach in the history of sports. He's never had a losing season, he's won 11 championships, and right to the end, he's loomed over the NBA landscape like no coach in basketball. And as much as his championships will jump off the page in NBA record books, for the people that lived it, Phil Jackson leaves a legacy of wry smirks in the face of success (or failure) that would've made the best of us lose perspective. Nobody else has ever seemed so fundamentally ingrained in the firmament of the league and so detached from all of it.

And if a series like this one is why we watch the NBA, then people like Phil Jackson are why we love it. As time passes and dynasties crumble, certain guys become larger than life.

Empires may fade, but icons last much longer. And after lasting 20 years, it feels like NBA fans know Phil Jackson even if we don't, and it feels like we'll miss Phil Jackson because we already do. We called him the Zen Master because of his adopted religion and the pearls of zen wisdom that came with it, but the greatest lesson was the coach, himself. He's the coach who became larger than life by understanding that he'll never be bigger than the game.

It reminds me of something his old Knicks teammate once told me. "Some people come into the league and figure the game is stats," Bill Bradley said, talking about finding success in the NBA. "But the game is really character. And part of character is understanding where you fit."

Phil Jackson always understood where he fit. Even if on Sunday, that meant understanding a 30-point blowout was how it all ends. After his press conference, I saw something Jackson said back in 2008. "There is a saying that I love," he told a reporter from Esquire. "It says: 'There are no Zen masters, there's only Zen.'

"Zen master is a contradiction in terms. You don't master Zen."

Understanding that is how Phil Jackson mastered the NBA, and why we'll miss him when he's gone.