Shaq Retires, Leaving Us To Wonder Whether He Could Have Been The Greatest Ever

Shaq retires, leaving us to wonder whether what made him an incredible entertainer also kept him from being the greatest big man in NBA history.

Share All sharing options for: Shaq Retires, Leaving Us To Wonder Whether He Could Have Been The Greatest Ever

Shaquille O'Neal has announced he will retire from the NBA after 19 often brilliant seasons punctuated by an MVP award in 2000 and four championships. Shaq wore many hats during his NBA career: dominant center, physical anomaly, skilled giant, quote machine, bad actor, worse rapper, bequeather of nicknames, mogul, fan favorite, target of hate, diva. But all of that pointed at one clear definition of Shaq as an entity: he was a star.

Shaq was almost a perfect response to Michael Jordan, the reigning hegemon whose NBA welcomed O'Neal in 1992. Where Jordan was psychotically determined and polished, Shaq was often goofy and darling. Nothing mattered more than basketball for MJ, and it showed, even when he made movies with Looney Tunes. For Shaq? Basketball was a piece of him. Basketball was the day job -- a day job he did seem to love and that he was obviously incredible at. But just a piece. We sit at the end of a long, gold-encrusted 19-year career, and we know now basketball was just a piece of Shaq. Imagine how we'll see it in another decade, when O'Neal's run through another dozen projects.

But that personal diversity in interests, that sanity in knowing that it's unhealthy to invest yourself totally in one single thing ... that kept him from reaching his awesome potential.

Shaq could have been the Most Dominant Ever, as he called himself. He could have been a bigger Jordan, a perennial MVP, a perennial champion. He could be the undisputed best center ever instead of a candidate for just the top three or top five. He could be in the conversation for the best player ever. At his peak, focused totally on making himself the best, Shaq was completely unstoppable.

But that was for just a year or two. He'd re-engage: his 2000 season was the stuff of legends, and he should have won the 2005 MVP award over Steve Nash for his brilliant comeback with the Miami Heat. His 2009 All-Star bid was well-deserved ... at age 36. But in the context of Shaq's career, those look more like comets than a prolonged meteor shower. O'Neal was regularly a shooting star. But the greatest -- the Jordans, the Russells, the Wilts, the Magics, the Birds -- don't take years off, don't let up. Shaq did.

Perhaps the best illustration of Shaq's imperfect career is to compare it to that other amazing Lakers center, Kareem Abdul-Jabbar. 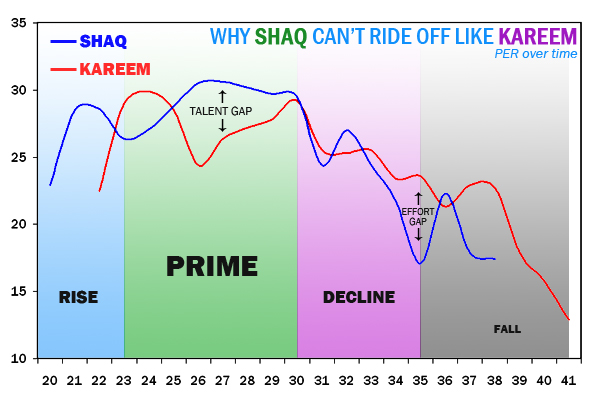 The y axis is John Hollinger's PER, an imperfect metric that nevertheless measures stars exceedingly well. Over their primes, Shaq was a whole lot better than Kareem. But, as illustrated, O'Neal's slide was much, much more steep; though he remained better than replacement level over the past two seasons, he didn't offer close to what Kareem did. This wasn't a matter of burning out too quickly: the resuscitory peaks at ages 32 and 36 showed that Shaq still had it. But he didn't have it consistently, and it's easy to blame his lack of total commitment to the game.

No one will forget Shaq or his impact on the NBA; no child of the '80s or '90s will forget the amazing pop culture influence Shaq had, either. From movies to rap albums to a video game to Twitter, Shaq was a total star. Unfortunately, there was a cost for that: it kept him from being everything he could have been on the court. What made Shaq great as an entertainer limited him to being just a great and not the greatest big man ever.