Finally, Video Of The Mavericks Celebrating On Their Flight Home

Share All sharing options for: Finally, Video Of The Mavericks Celebrating On Their Flight Home

Flying generally sucks, with only a few exceptions. When you've just won the NBA Title and are in the middle of a week-long celebration, flying on private jet back to a city that's waiting for the chance to worship you... Well yeah, that actually sounds like it'd be okay. 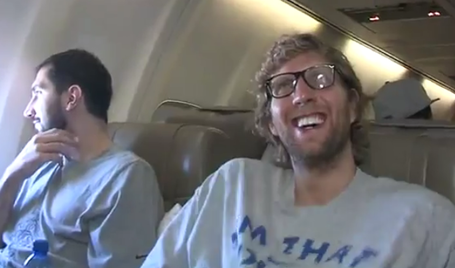 After the jump, we have the video.

Stuff like this is supposed to be off limits to fans. They let us into the locker room after titles, but the team flight is where things really get crazy. For instance, had there been cameras on the '86 Mets' flight home after winning the NLCS in Houston, the public would have been horrified:

After takeoff the boozing reached epic levels. The champagne was followed by beer, beer, and more beer. Almost everybody -- even Carter -- partook. (He had only one.) On this night the Scum Bunch were magnets, drawing people to the rear of the aircraft. "It was the loudest flight I've ever been on," says Michael Ruffino, one of the team's batboys. "It was sheer craziness."

For the first hour the all-out partying was little more than drinking and yelling. But then, the United crew committed the ultimate mid-celebration error: They served cake. ... Suddenly -- Whoooosh! Splat! -- pieces of cake were -- Whoooosh! Splat! -- everywhere. On the backs of seats. On the fronts of suits. In hair. Covering eyes. Brown icing was all over the carpet. Brown icing on the ceiling. Soon it was a free-for-all. Bottles of champagne rolled down the aisle. Peas were smooshed up and used as shampoo. "Tore up that plane like 'Bay Bay's Kid's," says Kevin Mitchell. "I couldn't believe the things I saw going on."

The Mavs didn't match the insanity there, but in fairness, they'd already spent the night partying on South Beach. This was the morning after--cake fights probably happened at Club LIV. But still, even if it's not the Mets, we should enjoy the Mavs video for a number of reasons. Namely, A) Drunk Dirk explaining his t-shirt, B) The startling amount of random unathletic-looking guys all over the plane C) JJ Barea and Brian Cardinal are two of those guys and E) The Jet, chillin on a jet, looking exactly like you'd expect the Jet to look after winning a title. 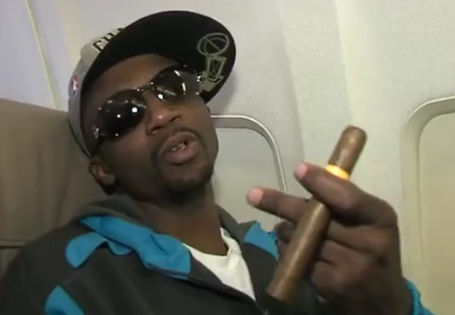 God it would have been cool to be one of these random dudes along for the ride. 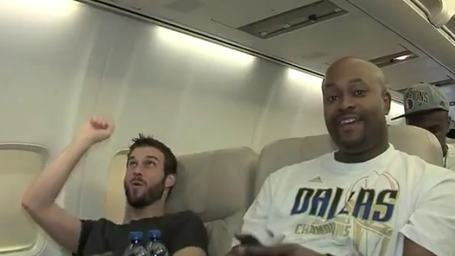