The NBA Lockout And Revenue Sharing: An 'Artistic' View

Share All sharing options for: The NBA Lockout And Revenue Sharing: An 'Artistic' View

The NBA lockout is nearly upon us. Franchise owners could vote as early as Tuesday to approve a lockout beginning Friday at midnight ET should a last-minute agreement not be met or an extension not be agreed to. That means that the NBA will follow the NFL down this stupid, greed-ridden rabbit hole in which both sides play the viewing public as fools while we, the fans, search deep into our hearts for answers to the question of why we care.

Revenue sharing has become a greater issue of late; the Associated Press reports that players are still bristling that robust revenue sharing isn't a part of the labor negotiations. Franchisees are bristling that the players won't just shut up and leave them alone about revenue sharing. More specifically, the league says revenue sharing can't be ironed out until the franchisees sort out how much future revenue they can bleed from the union. That's probably right, but as depicted in the tremendously awful imagery found below, it reads quite poorly given the situation at hand.

Basically, the league is demanding that players -- the basis of the league, the reason it exists -- save the failing franchises, even though the high-revenue teams (Lakers, Knicks, Bulls) have the ability to do so. 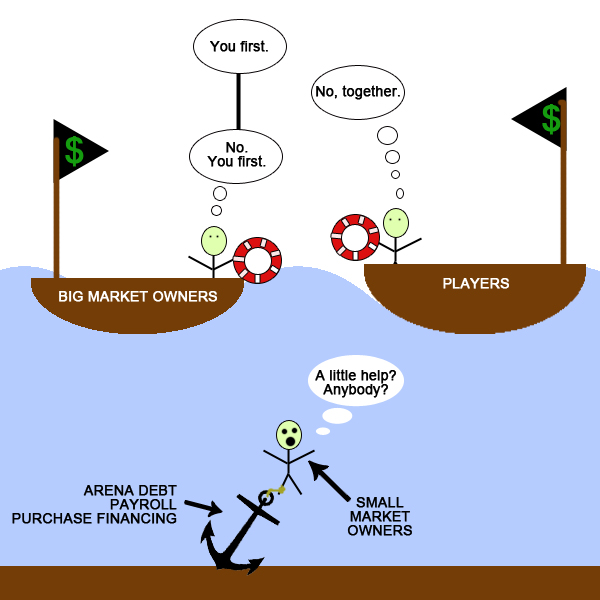 If the league institutes robust revenue sharing, well all those hundreds of millions of dollars in losses suffered by the Pacers and Kings and Bucks will actually be much, much smaller. The league could get the small, suffering markets to the surface via revenue sharing and still have a case for salary rollbacks based on the pace of salary growth versus revenue growth. But it's easier to make the case when those small-market owners are anchored to the bottom of the sea (as they are in the NBA's current system with high salary and basically no revenue sharing) than when they are bobbing at the surface (as they would be with a legit revenue sharing system).

Side note: I hereby threaten to produce more ghastly art if these bros don't figure this thing out soon. You've been warned.