Somethin To Groove To: Reliving The NBA's Best Worst Rappers Of All Time

It's summer and the NBA's on the verge of a lockout. Depressed? We've got the antidote. Let's take a look back at a different era, when it was okay for NBA players to embarrass themselves by recording a bunch of terrible, terrible rap music.

Share All sharing options for: Somethin To Groove To: Reliving The NBA's Best Worst Rappers Of All Time

The NBA Draft has come and gone and the sports world centers on college baseball, women's tennis, and a series of labor disputes, and it can only mean one thing -- yep, it's officially summer in the sports world. The dog days. That time of year when sports fans all decide, "Hmm... Maybe I should read a book."

It's rough out there. But it's also an opportunity to shine light on news that would otherwise be irrelevant. For instance, back when the NBA Playoffs were in full swing, when Dallas was battling Kevin Durant and the Thunder and Derrick Rose was going toe to toe with LeBron and the Heat, I discovered a YouTube channel that had me captivated for almost an hour. We couldn't write about it then, because obviously, the best playoff season in 20 years took precedent.

Now, though? What else do we talk about? College baseball? Wimbledon? The soul crushing realities of collective bargaining in pro sports? No, it's time to discuss Dana Barros' hip hop career. 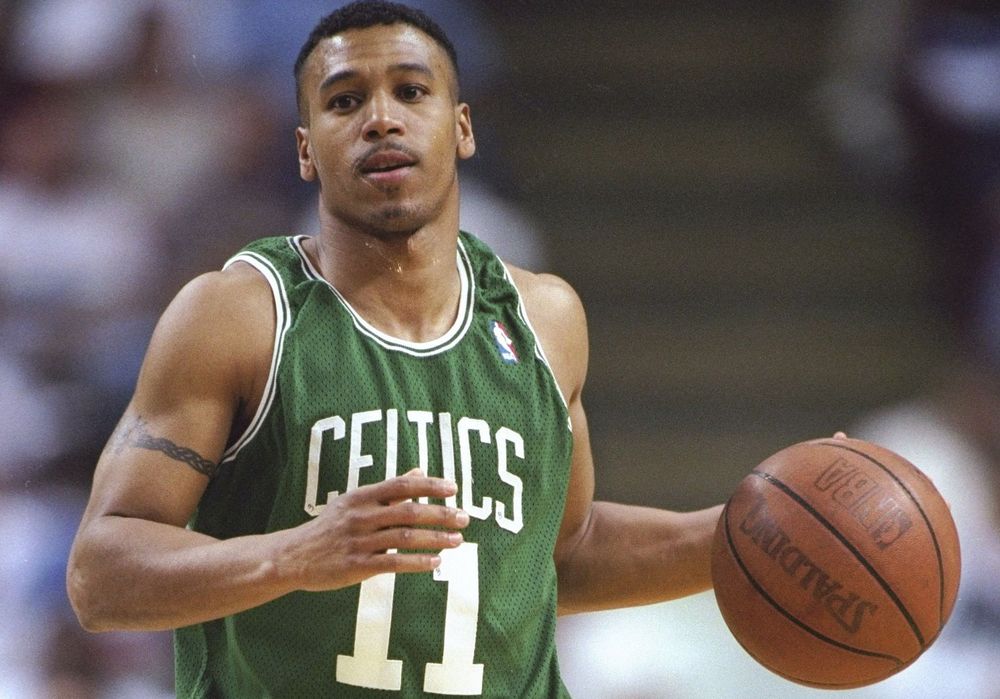 You didn't think someone named "Dana" could ever be credible rapper, did you? Pfft... That's like saying you'd need to have actual talent to record a rap song. If you're an NBA basketball player, some rules just don't apply. Witness 1994's "Check It" from Dana Barros:

Mad dough's what I made when I played,
Crossover? Hell no, Dana B's paid,
I stay strapped, mad brothers wanna step to this,
My 850 BMW's hard to miss,
I'm bout to blast like a homicidal psychopath,
... My mentality is loco, want some of this?

[Chorus]
I said hold ya head son, it'll only take a second,
(Check it out now!)
Come onnnn while I wreck it

Obviously this sort of thing could never, ever happen in 2011. If an athlete released a song like this today, it'd make its way around the internet within 24 hours, lead to widescale ridicule, and then probably a suspension because, "I'm bout to blast like a homicidal psychopath"? But that's why 2011 sucks.

In 2011, athletes are hyper self-aware, to the point where almost everything LeBron James does is calculated for how it'll play with public perception. We can tell it's all calculated, though, which is why almost everything LeBron does backfires horribly, and leaves him looking contrived and desperate (at best) or clueless and soulless (at worst). Back in 1994, we didn't have these problems, and Shaq could release multiple hip hop albums with blinking an eye.

Athletes were just starting to get paid ridiculous amounts of money, but the scrutiny wasn't nearly as intense, so these overnight millionaires were free to float around without any semblance of self-awareness. This explains pretty everything Deion Sanders did between 1989 and 1997, but more to the point, it helps explain how a collection of C-list NBA stars got together and recorded a hip-hop album together.

The album's called Basketball's Best Kept Secret and it includes 90s cult heroes like JR Rider, Chris Mills, Cedric Ceballos, Dennis Scott, and Malik Sealy, along with some bonafide NBA legends like Gary Payton, Shaquille O'Neal, and Jason Kidd. Because really, who could forget Kidd's lyrical gymnastics on "What The Kidd Did (featuring Money B)"?

J-Kidd from the town,
OOOOO-A-K,
peep game from a newcomer, so they say,
I'm the new Kidd on the block,
but they jock stilllll,
I got skills with the rock.

You may recognize this song because it surfaced during the Western Conference Finals, when everyone collectively responded with, "Wait, Seriously?" to the idea that Jason Kidd ever recorded a rap song. Because, um... It's Jason Kidd! You'd be hard pressed to find a less likely MC in the entire NBA (mostly because his voice makes him sound like a therapist). Nevertheless, it was the mid-90s, people were taking chances, and he was the new Kidd on the block (GET IT?).

But for my money, Kidd's high school rival will always be cooler. And of all the players featured on B-Ball's Best Kept Secret, Gary Payton's probably the only one that actually carried himself like a hip-hop star. Or at least a hype man. Livin Leeeegal and Larrrrrge:

{chorus, singing}
Livin leeeegal and large,
GP's the man in charge,
He's got his gaaaaame on you

{verse 1}
Comin up as a youngster, the G had faith,
I always pray to God that I make it one day,
And now my dreams aliiiiive,
My used to tell me that you gotta strive,
to be the best that you can be, to survive,
Now I'm livin legal and larrrrrge,
Got a fat bank account, and a bunch of credit cards,
Makin the opponents bow down on the court,
If you wanna (????) with me, it's cause I love the sport,
Have the fans yellin for joy, because I'm bounin the ball,
Blowup like Sha'Nay Nay, they call me payday,
The big ball handler, give ya what ya want,
Slam dunk, hit a three, talk a little junk (HUH!),
It's all good if you feelin inferior,
Cuz I'm superior, much better than the expert,
Me and my crew sticks tight when we step in the club,
You know how it get, when I'm high and it's riiiiiight

The chorus has a real mid-90s feel, doesn't it?

Seems like it could have made the New Jack City or Juice soundtracks. And regardless of talent, you have to respect that an NBA All-Star is rapping about having a lot of credit cards and being the big ball handler that gives you what you want (pause?). It's all good if you feelin inferior.

There's so much more, too. Like Malik Sealy's record, "Lost In The Sauce" which is either A.) a grunge rock ode to alcohism, or B.) a sunny, autobiographical success story that urges young fans to avoid getting caught in depression. Go ahead, take a guess. The lyrics:

I dunk it on you from the DOTTT-TED,
If you actin like you want it then you GOTTTT IT,
The crowd deparrrrted, kept playin till the sun goes to next day,
Refuse to leave cause I'm too set in my ways,
But still found time, to bump and grind,
Relax and unwind. But could never be found,
With a woman who ain't standin on solid ground,
Can you dig it baby? I can't afford to lose my focus,
I got a bright future ahead of me and many people know this,
Especially the whole crew, from 2000, Valentine Avenue,
It's been a second, since we all laughed, huh?
Just remember, life ain't always fun,
Just remember, life ain't always fun

{chorus}
Life's just one big jumpshot,
You're either on or you might be off,
So try to maintain, and refrain from the strain,
And don't get lost in the sauce

Jokes about Eddie aside, Malik Sealy was pretty much the greatest. RIP.

...On the other side of the spectrum, there's JR Rider's record, "Funk In The Trunk", where he raps, "Labeled a villain way before I was a rebel, but now I got my money on some mothaf***in devil." Gotta admit, I have no idea what it means to have "money on some devil", but if it makes sense to J.R. Rider, then it's good with me. After all, do lyrics even matter with a chorus like this?

"IT'S THE FUNK IN YA TRUNK, SLAMMIN HARD LIKE A MONSTER DUNK."

Somebody needs to put that on a t-shirt for me. JR's also one of the only players on the album to curse, a chilling reminder that while a lack of self-awareness is all fun and games when it amounts to embarrassing rap music, it would only be a matter of time before JR took things a step too far. (Related: Why didn't the Jail Blazers ever record an album?)

Speaking of taking things a step too far... We could talk about Dennis Scott's song on the album ("All Night Party"), but really, not linking to Dennis Scott's 1997 Camp Meltdown would do a a disservice to everyone. Again, something that would have made the internet explode in 2011:

News anchor: [Scott] was talking with the children from the camp. During that talk, those attending became bewildered when Scott began discussing his own life. Scott told the kids he no longer wanted to be referred to as '3D' and then blasted the media for criticizing him, and for their accusations he's using drugs, a charge he denies. He told the children not to ask him for his autograph, but rather, to ask him about the rage that exists inside him.

Alright, we'll be back to Scared Straight with Dennis Scott in just a moment!

Scott then began playing rap music that contained explicit lyrics. Scott compared some of those lyrics to the songs of his own life. Scott then walked around the crowd of children rambling about his own life.

Dennis Scott: "What you talkin about? I live my life the way I want to. For all y'all out there in America, if you scared, say you scared. Cuz I ain't scared."

Okay that was Dennis Scott, everyone. Campers, remember to dream big!

But we can't end on that note. We need something to brighten the mood after that glimpse at the dark side. Something that'll remind us why the 1990s were so great. Something to make us nod our head.

Sumptin To Groove To! Chris Mills, lay it down:

It's Chris Mills, I come with the real deal,
Life is like a jumpshot. Sometimes it's not,
Always on the money, just like my days,
Could be rainy or sunny,
It might flip, so watch ya grip,
Just some advice, before ya slip,
So take heed, and try to make the violence cease,
And to my fans, I wanna say much peace.

Ahhh... So much better. Life is like a jumpshot, but sometimes it's not, and all things considered, I'm pretty sure Chris Mills just turned in the worst rap song ever and explained the universe at the same time. And yes, that marks at least two NBA rappers that compared life to a jumpshot. Deep, man.

The whole album's full of this stuff, and you can hear more by digging around on this YouTube channel. Or you can just buy the album on Amazon. And why wouldn't you? The only thing more entertaining than bad retro music is bad retro music recorded by forgotten NBA stars like Chris Mills and Malik Sealy. It's like a time capsule to another era, before the internet changed the way we understood NBA players (or taught us that JR Rider and Dennis Scott were insane). We should all make sure this terrible, cringeworthy music last for eternity.

In other words, it's the perfect soundtrack to a quiet summer day.