Welcome To The NBA's Golden Age

Dirk Nowitzki and the Dallas Mavericks came back from the dead vs. the Miami Heat in Game 2 of the NBA Finals, and it's just more proof that in 2011, the NBA's come alive like never before.

Share All sharing options for: Welcome To The NBA's Golden Age

Down 15 points midway through the fourth quarter of Game 2, already down 1-0 in the NBA Finals, and watching the Miami Heat celebrating as the series slipped away. The NBA couldn't have scripted a better set-up for what came next for Dirk Nowitzki and the Dallas Mavericks.

This was All-Time in real-time. NBA history as it happened. The Heat had the Mavs exactly where they wanted. When Dwyane Wade hit a three to extend Miami's lead to 15 with a little more than seven minutes to play, he struck a pose in front of the Dallas bench, LeBron James came over to join in the act, and the whole series looked over.

Everyone will focus on Nowitzki's role in the final minutes (and rightfully so), but in that moment, Jason Terry was pissed. As one reporter tweeted courtside, "After Wade held that pose and LeBron came to sing his praises, Jason Terry stalked them. He's cruising to get a T or get ejected."

As Terry said afterward, "It was a turning point in the game. We said there’s no way we’re going out like this, with them dunking on us and stuff. It would have really been disheartening." And I don't know whether Wade and LeBron's little dance inspired the whole team, but it definitely sparked Terry.

From there, he scored six straight points for the Mavs, turning a 15-point lead to nine and giving the Mavs new life. Suddenly it wasn't a blowout anymore, Miami was backpedaling, and Dallas had hope. It's a good lesson. You don't win NBA Titles without superstars like Dirk, but you also don't win without guys like Jason Terry. He may not be a perfect player, but he's absolutely f'ing fearless and possibly crazy, and when the other side looks unstoppable, it helps to have guys like that on your side.

And Miami absolutely looked unstoppable on Thursday night. Even during the first half, when they never led by more than four and trailed Dallas by as much as nine. For the first three quarters, it was one of those games where the score didn't really reflect the way the game looked to fans.

If you'd been watching without a scoreboard, you'd have guessed Miami was up by double digits all night long. The Mavericks kept it closer than that and even led at various points, but Miami kept responding with earth-shattering dunks and spirit-breaking threes.

It seemed like only a matter of time before they took control. Then the fourth quarter began, Miami pulled away, and with Miami up 15, the score finally seemed right. All night long, LeBron and D-Wade were the unstoppable force, and Dallas was the immovable object moving out of the way. 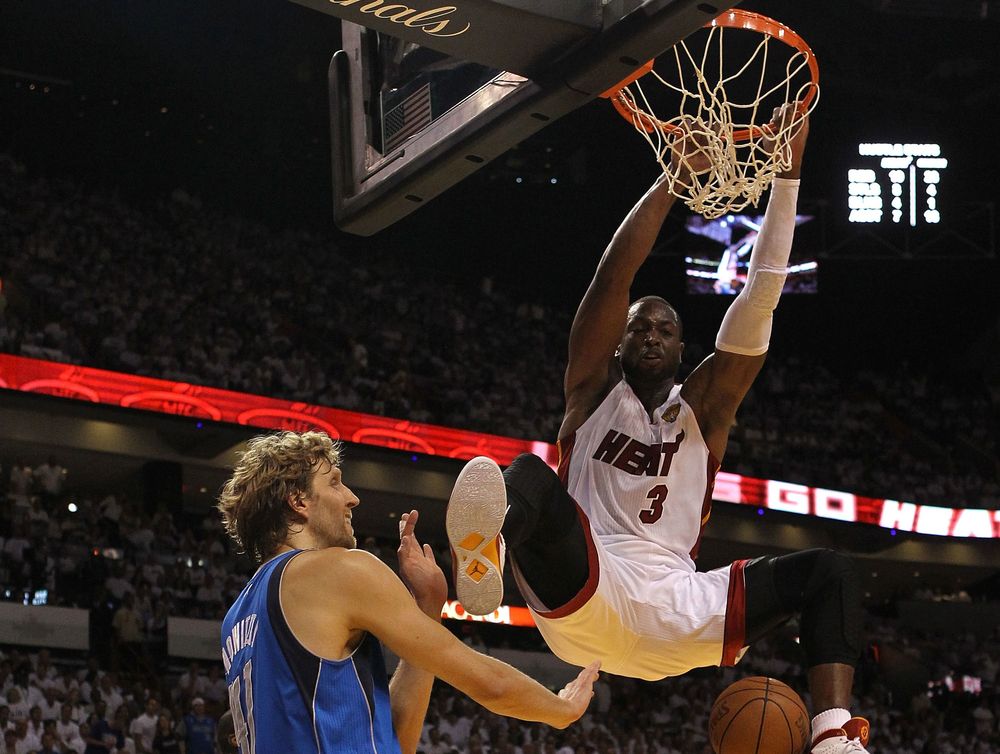 Eventually though, Terry, Dirk, and the Mavs got pushed too far. So after watching the Heat set the tone for the most of the first two games, they finally pushed back. First with Terry's quick flurry, and then, when things got close and the Heat got serious, with Dirk Nowitzki, who looked as unstoppable down the stretch as LeBron and Wade had been for the first 42 minutes.

Anytime a team mounts a comeback, it's easy to get within three or four points, but getting over the hump to actually tie and take the lead is always much harder. Having a superstar like Dirk makes it easier. So once the Mavs got within striking distance and started feeding Nowitzki, it was all on him. This was his moment to shine. What he couldn't do in 2006, he did against the Heat in 2011.

Starting with three minutes left and Dallas down four, Dirk scored the final nine points of the game, including a cold-blooded three to take the lead with 28 seconds left, and a backbreaking drive to the hoop to give Dallas the win after Miami had tied it with a three of their own.

A younger team might have been in Dallas' position and gotten tight once the game got close again. Once you go from "Nothing to lose" mode into "Wait, can we actually win?" mode, it's harder to come through. But that's when superstars are supposed to takeover, exactly the way Dirk did.

While LeBron forced desperation jumpers on the other end, Nowitzki was surgical. Even with a torn tendon in his finger and after a rough three quarters to start the game, his execution was ruthless. Slowly picking apart the Heat defense, chipping away at their lead, and eventually, going right for the kill. Superstar performances don't get any more convincing. 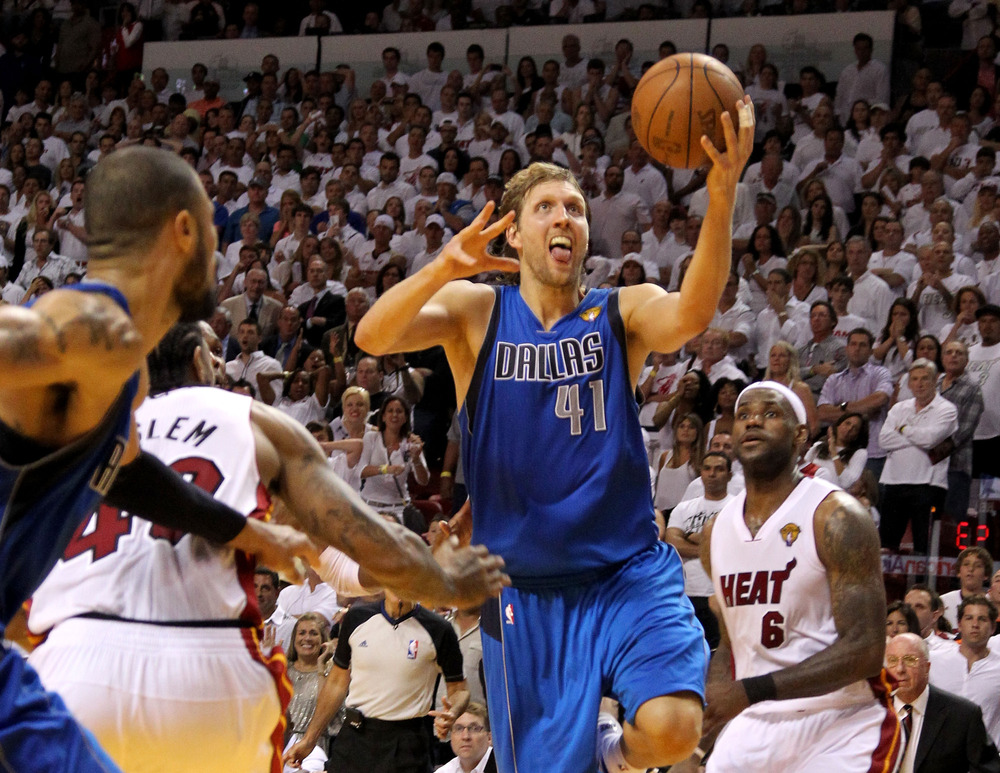 One of the founding principles of any NBA fandom is nostalgia. "Nobody's as good as Michael Jordan," we say. "There will never be another dynasty like Bill Russell's Celtics," others argue. And the NBA was cooler back when it was on NBC, and we could start every Sunday afternoon with John Tesh's awesome theme song.

Whatever generation you belong to, chances are you think it was better than what we have now. Whether you pine for the days when Bill Russell defined winning, or when Larry Bird stole the ball, or when Michael Jordan did The Shrug or when he hit The Last Shot... Everyone can agree that today's game just isn't quite the same.

There's a new Woody Allen movie that deals with this phenomenon, in general, but it's more prevalent in sports than anywhere else. It's hard wired into our brains as sports fans.

Everything we watch gets measured against the past and inevitably comes up short. While we nitpick the present, we remember only the best moments from the past. What we didn't love, we forget. The present's always a little bit disappointing, and the past is always better than it seems.

In the movie, Owen Wilson's character spends his days dreaming about 1920s Paris, the golden age of creativity, when Hemingway drank with F. Scott Fitzgerald while Cole Porter played piano in the background, and afterward, they all went to Gertrude Stein's house to look at Picasso's latest work. When he travels back in time to experience it himself, he gets to live his dream. Without spoiling things too much, I'll say that once he gets there, he realizes that even back then, in the golden age, people were wistful for bygone eras in the 19th century. No matter the era, the present always seems underwhelming next to the past.

All of which is to say, as sports fans, we should appreciate what's happening right now. Over the past six weeks, we've seen some of the best playoff basketball ever played. The NBA has more superstars than ever before, and they're all playing their asses off. The result has been a new Golden Age for the NBA. It's not the 1980s, but maybe it's better.

Dirk Nowitzki may not be Larry Bird and LeBron James may not be Michael Jordan, but together, they're giving us a matchup that sure seems like what Jordan vs. Bird would have looked like in the NBA Finals. They don't have to measure up to ghosts for their myths to resonate. Whatever happens from here, we've already gotten an NBA Playoffs that measures up with any second season in NBA history. All-time in real-time.

So Game 2 was just a reminder to cherish this stuff. Like the commercials say, I love this game because it's faaaaantastic and the NBA Playoffs is where amazing happens. But mostly, I think that WNBA commercial sums it up best. Basketball is basketball. No matter how much we dream about the past, the game keeps moving forward.

Looking at Dirk and LeBron right now, just for a second, fans might forget about Larry Bird, MJ, and the rest of the past. With these playoffs, you can't help but dream about what comes next.