Jason Terry Says Heat Celebration Inspired Mavericks, Does Not Own A Mirror

Share All sharing options for: Jason Terry Says Heat Celebration Inspired Mavericks, Does Not Own A Mirror

After Dwyane Wade hit a three to give the Miami Heat a 15-point lead in the fourth quarter, he and LeBron James celebrated a bit in front of the Dallas Mavericks bench, pounding chest and screaming "Yeah!" and doing the macho things that men do when men succeed. You'd see something like that about 25,000 times a year in the NBA.

From Dan Wetzel of Yahoo!:

"It really was disheartening to us," [Jason] Terry said. " ... [I] looked specifically at Dirk and said, 'There's no way we're going out like this.'" 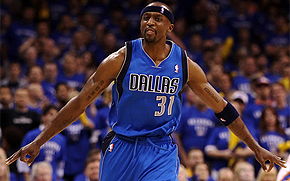 The irony is rich. LeBron and Wade's only crime was their location -- they were situated in front of the Mavericks bench, where Wade hit the shot, which means that entering the timeout every single Maverick saw the little woo-hoo! session. Other than that, it's not something anyone would give second thought to if not for the Mavericks' post-game comments.

And that's what kills me. Jason Terry? The guy who, after every three-pointer of moderate to heavy import, juts out three fingers on each hand, spreads his wings and pretends he's a jet -- his initials are J.E.T, get it? -- taking off from a runway? Jason Terry, the only cat who celebrates more frequently than post-war New York Yankees?

Make no mistake: if this series is decided by the egregiousness of the other team's preening, the Heat are definitely still in it.