The NBA lockout may be upon us, and David Stern isn't helping: the league's latest proposal is completely and utterly unreasonable. See what it would have done to the NBA over the last 10 years.

As we slink toward the brink of an NBA lockout -- if you have a doomsday clock in the family room, five minutes 'til should do the trick -- we ought to look at the latest proposals to get a sort of "state of the negotiations." And while I'd love to be the one who does that, I simply can't get over how insane the league's recent major proposal is.

That proposal would cap player salary at $2 billion a year. In actuality, the NBA calls it a "$2 billion guarantee," which is a brilliant bit of framing, for $2 billion is a lot of money, it's not much different from what the players take home now and a "guarantee" muddies the intent. Don't get it twisted: the NBA is not seeking to guarantee that players never make less than $2 billion. They want to prevent player salaries from growing to well over $2 billion, as will happen under the current system assuming normal or better growth. (Salaries and benefits for 2010-11 were at about $2.17 billion, according to multiple reports.)

What the $2 billion cap does is re-route all future growth of the league's revenue straight to the owners' pocketbooks. The NBA and players' union negotiated deals in 1998 and 2005 to share revenue between the owners and players, with the very obvious understanding that, as in any business in the world, the owners assume the costs of doing business and any inherent risks. Now the owners complain that they have no guaranteed profit, that even though the league is doing well, there's no mechanism to ensure individual teams do well financially.

Basically, the NBA is admitting that it's 1999 agreement -- considered a huge victory for the league at the expense of the players at the time, and one which took a lengthy lockout of its own to solve -- was a complete failure.

That very agreement set up the system in which players would receive a percentage of all league income as "guaranteed" salary and benefits; the agreement slotted 55 percent of basketball-related income for players through 2003-04, and 57 percent thereafter. The 2005 collective bargaining agreement continued this system through 2011; at that point, either the NBA thought that the system was working fine, or it so feared another lockout that owners held their nose and agreed to continue a suicidal agreement. I'll let you be the judge on that one.

The beauty of the current system created in 1999 is that how league growth and retraction is dealt with is built right in. If the league explodes, salaries can rise. If the league stagnates (as it has done a couple times over the life of the deals), salaries remain flat. There definitely need to be some tweaks, perhaps to contract length, either a stronger luxury tax or a decrease in the malleability of the salary cap (death to the mid-level!), tweaks to Bird rights, the end of sign-and-trade contracts.

Instead, the league wants to end the reasonable percentage-based split of revenues with players -- who are actually the labor and the product in the industry -- and "guarantee" $2 billion a year in salary and benefits. Let's imagine this was the league's route a decade ago. Right now, $2 billion is equivalent to 52 percent of league revenues ($3.8 billion.) Let's imagine that in 2001, the NBA got the players to agree to a 10-year collective bargaining agreement that capped ... uh, "guaranteed" salaries equivalent to the current $2-billion threshold. Revenues in 2002 were $2.7 billion, per Larry Coon, so the "salary guarantee" would be $1.4 billion. 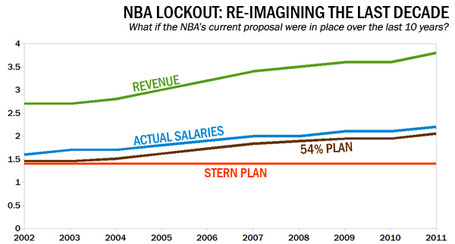 Under the actual plan approved in 1999 and essentially extended in 2005, salaries hovered around 57 percent of revenues. Revenue grew 40 percent from 2002 to 2011; salary grew 31 percent. Yet the league claims it lost $300 million last year. As the union has argued ad nauseum, this is likely due to the influx of new owners who borrowed lots and lots of money to spend $300 to $450 million on their new teams. But regardless: the league is $300 million short.

Would the union's current proposal -- to essentially drop the players' share of revenue to 54 percent -- have solved the issue? According to my math and Larry Coon's essential CBA resource, the 54 Percent Plan would have sliced $150 million off of 2010-11 salary, getting us halfway there. Over the past 10 years, the 54 Percent Plan would have saved owners a total of $1.66 billion in salary compared to the actual system in place, or about $166 million per season. That's a reduction in player salaries of about 8.6 percent, no small margin. It's a substantial giveback by the players.

What about what I've decided to call the Stern Plan, capping salaries at the 2002 equivalent of $2 billion over the 10-year span? Again, that's a $1.4 billion cap ... er, "guarantee" on player salaries every year, despite growth, stagnation or regression of league revenues. Would that have fixed the league's supposed $300 million in annual losses?

And how! By my math, if implemented a decade ago, the Stern Plan would have reduced salaries by a total of $5.1 billion, or $510 million a year, on average, representing a 27 percent reduction in actual salaries over the approved system. Not only would the claimed losses have been made up under the Stern Plan, but the owners would have seen tremendous annual profit across the board. Jerry Buss would have built a new continent by now.

In 1999, the NBA owners agreed to a system that gave players 55-57 percent of revenue. Had the Stern Plan been the deal back then, the system would have given players just 43 percent of revenue over the life of the deal, and just 37 percent in the 2010-11 season. Had this plan been in place over the past decade, this column would be about what a phenomenal boondoggle the league had sold the union in 1999, what a draconian result the lockout had and what incredible fools the players were for agreeing to it.

Instead, the NBA in 1999 realized that players have an incredible role in growing the sport, and deserve to be compensated fairly for that growth, and the system under which revenue is split should reflect that. It did. It needs some tweaks to cut those claimed losses, but for the most part, it worked.

That's why the league's proposal to cap salary at $2 billion or any fixed number based on current revenue is a completely non-starter, an insult to the players and total insanity. Pound of flesh? Hardly. The NBA is trying to sever players at the waist and discard the top half. This is not a reasonable proposal, and shouldn't be accepted as such -- by the fans, by the media and certainly not by the players.