The 2011 NBA Playoffs have been ridiculously bountiful in moments that make us scream in glee, in terror or just for the sake of screaming. As you'd expect, Dirk Nowitzki and the Miami Heat have played a magnificent role. Let's follow them through the Seven Circles of Holy S#!t.

Share All sharing options for: Seven Circles Of Holy S#!t In 2011 NBA Playoffs: Dirk Nowitzki, Heat Lead Us To Our Inner Expletives

The 2011 NBA Playoffs have been an orchard of Holy S#!t Moments, from the beginning to now, three games into the NBA Finals. Down every single row, there's some incredible comeback and life-affirming shot. Just when things have truly gone bananas, a talking grapefruit turns your attention to the next expletive-drawing heartstopper of a play.

Stars have given us all of their best, with Dirk Nowitzki, LeBron James, Derrick Rose, Kevin Durant, Carmelo Anthony and Chris Paul providing a number of outstanding, memorable efforts. The roleplayers, too, have gotten in the mix, with Gary Neal and Taj Gibson wearing out highlight reels. In the middle of it all are the roller coaster cases of Zach Randolph and Brandon Roy (never forget). It remains to be seen whether the season will be remembered for a better-than-fiction Finals and what narrative will override all in the history books. But it's safe to say that no matter what happens in the final few games, this postseason has been breathtaking beyond compare.

Does that seem overstated? Then feast your eyes on the Seven Circles of Holy S#!t in the 2011 NBA Playoffs. 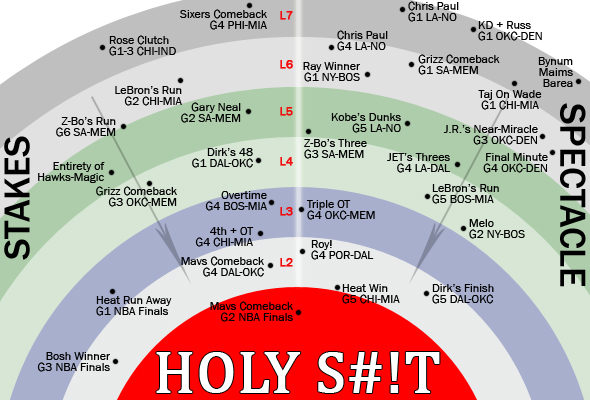 Our map of Holy S#!t is organized, like Dante's Hell, into circles, seven in our case. Two factors make a moment a Holy S#!t moment: high stakes, and mesmerizing spectacle. The recipe is different for each moment; that's part of what makes them so special. Dirk's stunning run to finish Game 5 against the Thunder, for instance, didn't have suffocating stakes; had Dallas lost, they had two more chances to finish off OKC. But the spectacle was marvelous. The opposite can be said of Chris Bosh' game-winner on Sunday: it didn't leave you gasping for air, but it won a crucial Finals game. Tremendous stakes, not a whole of sparkle ... still made you say "Holy S#!t."

Let's dig into the Circles of Holy S#!t, from the outer edge in.

Fifth Circle of Holy S#!t: Did You See That?!

Third Circle of Holy S#!t: I Don't Believe It

Inner Circle of Holy S#!t: There Are No Words

We have between two and four games left. What more magic do we deserve?