Chivalry In Basketball: Why Being An Impure Point Guard Isn't A Bad Thing

If purity is the measure of a point guard, our league is upside-down. Plus, The Hook expresses contempt for some apparent sleight of hand in Boston.

Share All sharing options for: Chivalry In Basketball: Why Being An Impure Point Guard Isn't A Bad Thing

This is The Hook. Today, a visit to the NBA's monastery and some anger at the Celtics' apparent Copperfield act with local TV dough.

Back in 2008, I wrote a piece for BallHype regarding point guard purity, and I put together an easy to follow metric dubbed Purity Scale to compare the purity of point guard in comparison to that of other point guards. (BallHype is dead, and the piece lives only in mutilated form via the Wayback.)

The idea is that purity is a defining and defineable characteristic of a point guard, but not necessarily a positive or negative indicator. For so long, pure point guards have been topped with halos and combo guards dreaded like a plague. There's a reason Cousy and Stockton are the ideals, even though there have been most productive point guards in the league's history.

So what's pure and what's impure? Assists are the pure half of the equation, and shots are the impure half. Foul shots count, too, so we divide assists by combined field goal attempts and estimated possessions ending in foul shots (free throw attempts multiplied by 0.44). To put it on the easy-to-follow scale, we adjust to a 100-point scale using the mean. For this exercise, we included all point guards who averaged 30 minutes a game in 2010-11 and totaled at least 800 minutes. 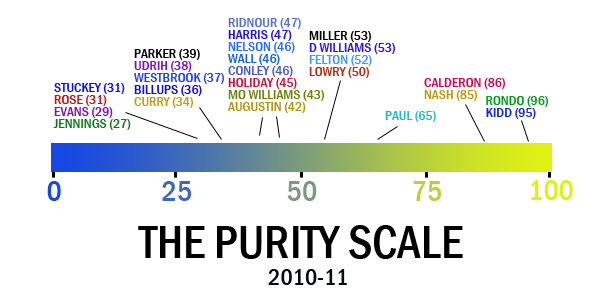 There is a lot of common sense here: Rajon Rondo and Jason Kidd are quite pure, while true combo guards -- as in, they play as much shooting guard as point guard -- Rodney Stuckey and Tyreke Evans wind up way down near impure.

But a few things stand out. Like, holy Hell! Derrick Rose.

Rose was the third least pure starting point guard in the NBA last season. He had huge scoring duties, and that tamped down on both his assist opportunities and his purity rating. Most of us knew this to be the case just by watching the Bulls: no one ever mistake Rose for the second coming of Steve Nash. There's a reason those "Steve Francis with a good attitude" comparisons keep coming back like zombies with well-developed neck muscles.

But less pure a point guard than Rodney Stuckey? That's unreal. Stuckey dealt 0.36 assists for every shot attempt, and Rose came in at 0.34. Each could be considered a shooting guard if we didn't know better.

Another surprise is Chris Paul's stature well behind the Pure Four -- Kidd, Rondo, Nash and the literally inimitable Jose Calderon -- but far more pure than even seemingly true points Deron Williams and Andre Miller. Wait ... Andre Miller? There's no question that Brandon Roy's injury forced Miller to take more shots than he's usually accustomed to, but let the record show that Miller has never been that pure. Here are the assists per shot rates for Kidd and Miller since 2000. 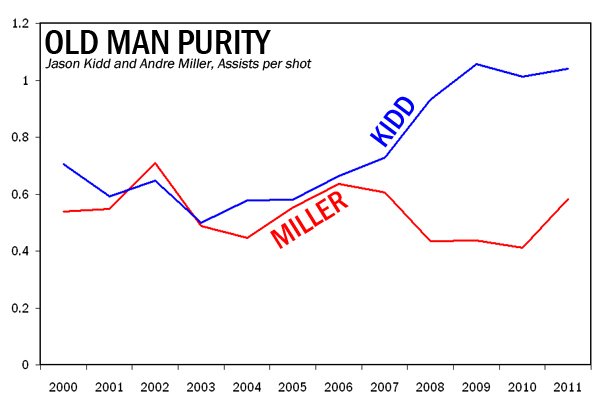 Since Kidd left the Nets for the Mavericks, he's become one of the most pure point guards in the league. Since leaving Philadelphia, Miller has ... stayed about as impure as ever, which is to say he remains among the 10 most pure point guards in the league, but is a far, far cry from the Cousy ideal. Yet the perception remains that Miller is unselfish, a willing and regular set-up man. He consistently takes about two shots per assist, while the truly pure point guards don't even manage one. Miller is much closer to Jameer Nelson and Devin Harris in terms of purity than he is Nash.

Keep that -- and the Scale in total -- in mind when considering what teams need what, and why they should pick this guy over that one.

If competitive balance is really such a major reason why the lockout is justified, why is Wyc Grousbeck trying to Copperfield some of the Boston Celtics' new local TV cash? Reports suggest the Celtics are near a new deal that would double the team's annual take from Comcast SportsNet New England and give Grousbeck and company a 20 percent stake in the regional sports network. The CSN NE stake? As Michael Ozanian of Forbes argues, that's a pretty smart way to keep real revenue out of basketball-related income, a substantial portion of which is paid to players under current and future collective bargaining agreements.

J.A. Sherman of SB Nation's Welcome To Loud City has another issue with the deal:

Here you have Grousbeck, owner of the Celtics, negotiating a media rights deal that presumably is favorable to the Celtics franchise. On the other hand, he is the acting chairman of the NBA's planning committee, which is overseeing the NBA's attempts to overhaul its revenue-sharing system. In other words, Grousbeck has to know how the league is planning on building its revenue-sharing system, which is a system that will likely redistribute local broadcasting rights like the one he just signed with Comcast.

Which is the more likely scenario - that Grousbeck would use his inside knowledge of the league's revenue-sharing negotiations to structure a deal that benefits his team the most, or one that benefits the league the most? It would be one thing if the revenue-sharing system were already in place and he just negotiated a deal using that system as his parameters. However, this isn't the case at all. The system isn't even instituted yet; so Grousbeck built his TV deal first, knowing that he as the chairman would have a leadership role and active input in protecting his deal later on.

Now talk to me about competitive balance. The Celtics have been great to the team's fans by investing heavily in the product on the court. No doubt that, altruistically, Grousbeck would invest a portion of the CSN NE equity stake's spoils back into the Celtics. But it belies the competitive balance angle completely, because that kind of money isn't available to smaller market teams, and that kind of power of leading the creation of a system around your circumstances.

It'd be like if Spurs owner Peter Holt ran the competition committee and pushed through a system to ban dunks.

Sherman has more on the deal's interesting flavor, and no doubt more will come out soon. Stay tuned. In the meanwhile, keep up your guard when anyone from the league HQ mentions competitive balance.

Presented without comment, a paragraph from Rick Reilly's 1998 SI column comparing the NBA lockout to a blue-collar strike in Madison, Wisconsin.

Not that the players and the workers don't have a lot in common. NBA players want the minimum salary for veterans raised to around $1 million, superstars to be able to re-sign for upwards of $15 million without their teams' having to pay a luxury tax, and they want 60% of the league's gross revenues. The Peterbilt workers have outrageous demands, too. They're asking for a cost-of-living allowance, the company to kick in on some health insurance for pensioners and the chance to retire at a livable wage before 65.