NBA Lockout Now Has A Mystery Meat: 'Other Expenses'

Share All sharing options for: NBA Lockout Now Has A Mystery Meat: 'Other Expenses'

Nate Silver of the New York Times' Five Thirty Eight put together the best piece of analysis on NBA finances we've seen since the NBA lockout began on July 1. Silver uses public data from Forbes and Financial World to piece together a puzzle we're otherwise left taking the NBA's word on: is the league actually losing hundreds of millions of dollars despite soaring revenue, rising popularity and a new golden age?

Silver asserts that according to the data at hand, no, the NBA is not losing money. In fact, it has earned a tidy profit every year since the 1998-99 lockout, to tune of about 7 percent annually. We wrote about Silver's study in our burgeoning NBA lockout StoryStream, but something in particular stuck out and, I felt, was worth investigating.

It is the mystery meat known as "other expenses."

Silver notes that while player salary has kept pace with league revenues -- as is designed into the now-expired collective bargaining agreement that was agreed to in 1999 and essentially re-upped with tweaks in 2005 -- non-payroll expenses have skyrocketed.

Growth in non-player expenses has outpaced that of salaries, having increased by 13 percent over five years and 43 percent over 10 years. Although some of this undoubtedly reflects sound business ventures, like the league's investments in digital media or efforts to expand the game internationally, they have nevertheless had a reasonably large effect on the league's bottom line. Had nonplayer expenses been the same in 2009-10 as they were in 1999-2000 (adjusted for inflation), the league would have made a record profit that year.

Well, then! But what are these other expenses? We're checking with the league, but common sense would say that travel, equipment, coach and front office salaries, advertising and digital and global initiatives are included. Arena leases or mortgages might be in there too, though given that many franchises own and operate their own gyms, that could get tricky. Again: we're checking with the league to see what sort of expenses can be included here.

Maybe that will explain the odd spikes in "other expenses" over the past 10 years. I graphed the data Silver compiled and adjusted. "Other expenses" are in blue. Click to enlarge. 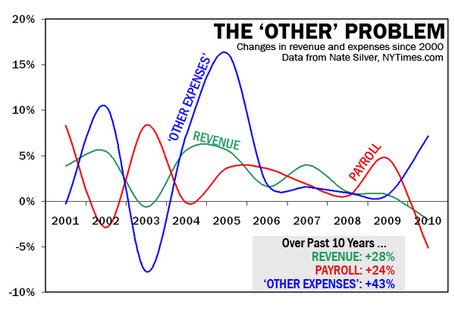 As Silver notes, even without cracking the "other expenses" mystery, the data suggests that the league is profitable, despite its claims. But if there is funny business going on in the expenses realm beyond what was discussed with regard to the "roster depreciation allowance" last week (with follow-up, of course), that could sure color how observers see the NBA's pleas.