China Ban On NBA Lockout Exiles A Major Blow, But Not The Final Word

Without question, the Chinese Basketball Association's decision to block locked-out NBA players is a major blow to the union's cause. But the shoe companies, led by Nike, can salvage the opportunity by organizing events in China. Also In The Hook: Georgetown-Bayi Power Rankings.

Share All sharing options for: China Ban On NBA Lockout Exiles A Major Blow, But Not The Final Word

The Chinese Basketball Association indeed voted to close off the league to NBA players seeking refuge during the lockout, as was expected. The CBA outright banned Chinese teams from signing players under NBA contract, and added a second rule preventing NBA lockout opt-outs from being included in contracts, which means NBA free agents who sign with Chinese teams can't then leave if the lockout ends. Basically, there is no way NBA players of high repute will be playing in the CBA this season.

But that doesn't close off China entirely. Nike has put on huge events in China in the past, though usually with cooperation from the NBA. It's going to be up to the shoe companies to, if they want to, get their top players in front of Chinese fans this summer. If that means a barnstorming tour, or a couple small tournaments, just a few games like the ones held in Manila, so be it. But Nike has been said to be the driver of China as a lockout destination, and the shoe companies are the only companies with the wherewithal to get something going. You can't depend on agents to set it up, especially as they become increasingly involved in negotiations.

There's been a lot of opportunity but almost no action on the players' side so far, outside of Deron Williams and the dozen or so players who have signed in Europe. China is where the money could be, and the CBA decision is a huge blow. Someone on the union side needs to make something happen, or all the leverage thought to be provided by the overseas option is gone.

Fans of global basketball fights had some rare action on Thursday, as Chinese Basketball Association team the Bayi Rockets brawled with the visiting Georgetown Hoyas at the end of an exhibition goodwill match. (Goodwill? Ha! Almost as funny as the Serbia-Greece "friendly" last year.)

The Hook does not condone fighting, but it would be irresponsible not to grade this fight out, for history's sake. Thus, the Hoyas vs. Bayi Power Rankings. We're using the two video angles available (here's the second angle, and the original) plus photos and accounts of the brawl.

1. John Thompson III. The Georgetown coach will likely lose the respect of those who claim no Hoyas team coached by JT3's father would get roughed up, but that criticism misses the point. Once confronted with the reality that his players were getting beaten by the official team of the People's Liberation Army he ran in and tried to save his kids. In the Sports Grid video, around the 27-second mark you see JT3 arrive at the leftward baseline extended, where he then essentially guards a fallen Hoya who had been chased, cornered and throttled. Meanwhile, chairs are being thrown, bottles are being thrown, haymakers are being thrown. Thompson gets his kid out of there before moving on.

2. Hoya Wielding A Chair. In the WJLA video, at the 39-second mark you see a Hoya in warmups enter the bottom of the picture. He wields a chair -- one of those rigid meeting hall chairs, not a folding chair. His vignette is hysterical. 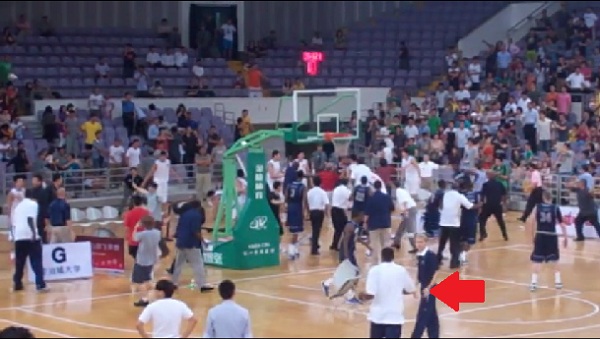 Here he is with a chair, casually making his way toward the melee, which now happens to be dying down. In the video, notice how no one tries to stop him. 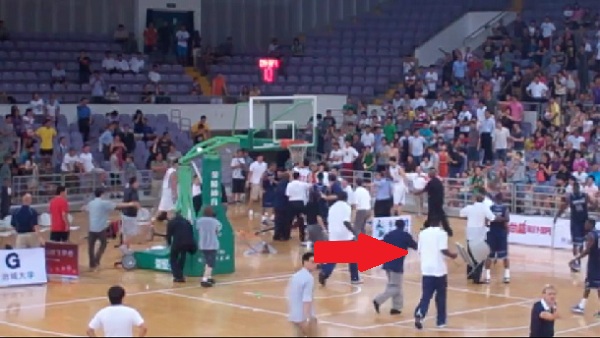 He changes direction as the melee moves closer, but note that not one person is trying to impede his progress. Everyone is either taking care to make sure they are not being sucker-punched, or does not consider Hoya Wielding A Chair to be a threat to the Chinese combatants. 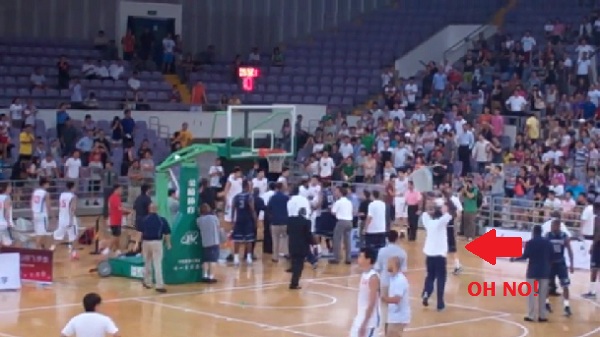 Oh no! There were wrong! Hoya Wielding A Chair lifts the seat high above his head, ready to attack a Chinese combatant -- who, I remind you, is a member of the Chinese army -- for his insolence. It appears a Georgetown official in a suit and fellow Hoya are now concerned about Hoya Wielding A Chair, those they could be looking past him at the rest of the action, which continues.

Regardless, Hoya Wielding A Chair is prepared to exact mass punishment! 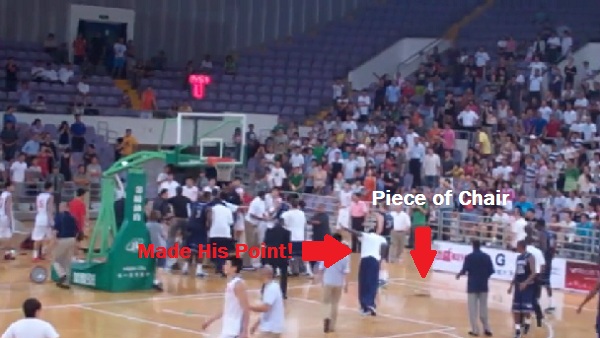 Hoya Wielding A Chair smashes the chair on the ground. "Try sitting in that chair now, China!" This has turned into a Limp Bizkit video. Well played, Hoya No Longer Wielding A Chair. (Georgetown official and concerned player now seem more confused that anything.)

3. Hoya Fan/Videographer. The man who shot the WJLA video is a Hoya fan. About 45 seconds into the brawl, he notes that the game will be ending in a tie. Yep, this fan focused on the important stuff. Later, as the Hoyas make their way through the tunnel to the locker rooms, right in front of this fan, he begins a one-man "Hoy-as! Hoy-as!" chant ... as a gym full of Chinese fans hurl bottles at the players. He does this all while shooting remarkably stable video of the fight. A TRUE CHAMPION.

4. Aaron Bowen, Georgetown No. 23. Bowen, unlike a number of his teammates, doesn't get cornered and double- or triple-teamed. He stays on his feet and circles around. Watch for him beginning with the 10-second mark of the Sports Grid video.

UPDATE: The astute readers at Casual Hoya note that Bowen was tackled and assaulted by three Chinese players soon after he swooped back into the melee. SB Nation's heroic techbro/Hoya Chris Haines recommends Mikael Hopkins (No. 5) for accolades for freeing Bowen via tackle. Consider the ranking modified as such.

5. Khaki Shorts. This guy came straight from the golf course to stomp poor Jason Clark in the breadbasket. He may not be a great basketball player, but he surely will serve China's military well.

7. The Chinese Military. The solidarity and quick reactions -- look at how quickly the initial pair of Chinese combatants square up together on Clark to start the melee -- are something to be feared. I think it's pretty clear that this Bayi team would have taken either Serbia (with a chair-wielding Nenad Krstic) or Greece (with an angry Big Sofo) from last summer's major basketbrawl.

8. Georgetown alumni. They were unanimous in defending their little brothers. No word on what Allen Iverson has to say, though.

18. Joe Biden. Biden attended Georgetown's game Wednesday ... but not the Bayi game Thursday. On the one hand, thank goodness that he's safe. On the other, the Secret Service could have done something about this, right? Visit a psychic before your next trip abroad, VP.

136. Chinese fans who threw stuff. That's not cool. You are not in the fight. You might think them Hoyas had it coming, or want guys like Khakis and others to exact some sort of fear-inducing beatdown. But your damn water bottle has nothing to do with it. Calm down. You're not a basketball player. You have no role in this fight except to look like a jerk that anonymously throws objects at foreign visitors. You are terrible, and you should be ashamed. Throwing stuff on the field of play -- even when there's a fight going on -- is unacceptable. Stop it.

The Hook is an NBA column that runs Monday through Friday. See the archives.