Love This Game: The Genius Of Basketball's Endless Summer

Kevin Durant scored 44 points to win the MVP in Saturday night's Capital Punishment exhibition game in Washington D.C., and while the NBA lockout drags on, basketball's underground scene is keeping the game alive, one highlight at a time.

Share All sharing options for: Love This Game: The Genius Of Basketball's Endless Summer

Here's to hoping Kevin Durant stays stateside for the year. An exhibition game in D.C. Saturday night turned into a kaleidoscope of highlights and left everyone walking away wanting more—and if stars like Durant, John Wall, and Brandon Jennings stay stateside during the NBA lockout, we'll probably get it.

I was there this weekend, as stars from L.A. and Washington D.C. gathered downtown Washington D.C. to stage an exhibition game called Capital Punishment. In addition to Durant, Wall, and Jennings, there was James Harden, Ty Lawson, Demarcus Cousins, Demar Derozan, Javale McGee, all battling in a 1,000-person gym normally home to a D-III women's team. Others, like Andre Miller, Delonte West, and Rudy Gay, sat courtside. In the endless summer of hoops, this was the latest, greatest wave we've seen so far.

In case you've missed it, instead of a moratorium on all things basketball, the last few months have seen the NBA lockout give way to a grassroots hoops culture the likes of which we've never really seen. The games themselves are nothing new; NBA players have been playing summer basketball as long as the game's existed. But the difference is in the following they've attracted.

One explanation for the change centers on the Internet. Fans follow their favorite players on Twitter, see videos of the latest summer exploits on blogs, then share it with their friends on Facebook. In past years, the streetball exploits of NBA superstars (and streetball superstars) has only lived on through word of mouth. From New York City to L.A. to Raleigh to D.C. and even overseas, today's "word of mouth" travels thousands of miles instantly. (Remember when everyone was talking about an All-Star game in the Philippines?)

The other explanation centers on stars like Durant and Jennings. Where most NBA superstars would balk at fans scrutinizing their every move in glorified pickup games, guys like Durant and Jennings have taken it all in stride. Not so much by playing to the hype, but by playing with no pretense, as often as possible, against whoever wants to show up. Nobody's worried about getting embarrassed or jeopardizing their endorsements, and pretty much everyone's looking for the same thing—the best game they can find.

The dynamics sound sort of cliche in the abstract. On the one hand, you have the typical lipservice paid to the impact of the internet, and on the other, some of vague praise for basketball players who supposedly love the game more than most. But if you were looking for the cliche on display, where love of the game takes on a viral life of its own, Saturday night was the pinnacle. 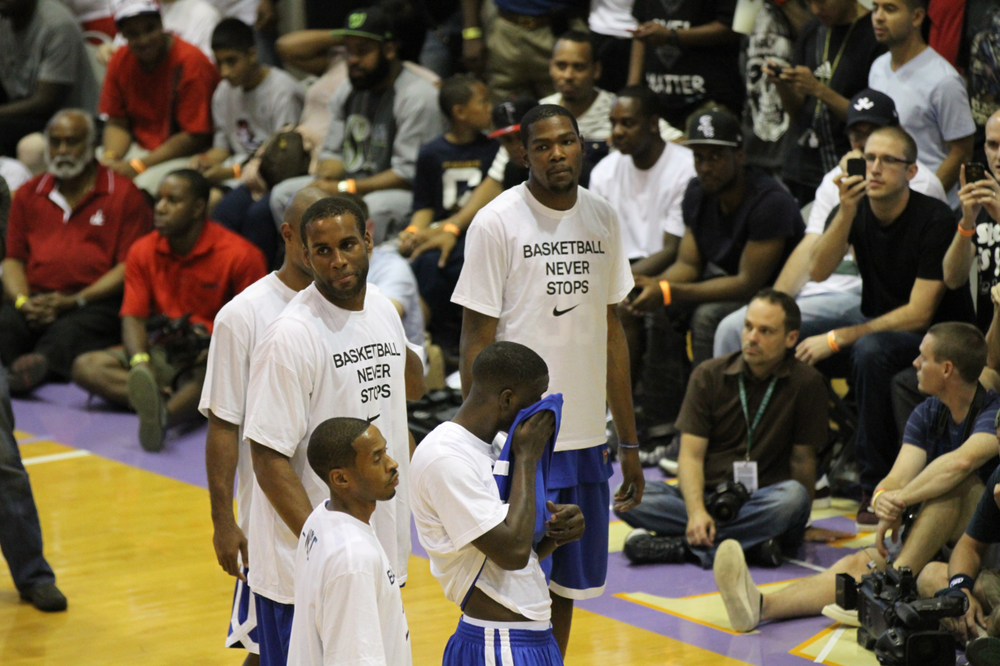 An all-star game between rival summer leagues on opposite coast, Capital Punishment was organized by Miles Rawls, the do-it-all know-it-all commissioner of the Goodman League in D.C., and exactly the sort of outsized character that makes streetball different.

The game took months of organizing, and after multiple venue changes, Rawls and co. finally settled on a gym at Trinity University seated around 1,000 people. That wasn't nearly enough, it turns out. Another thousand people with tickets were turned away at the door (refunds will be provided), and afterward, Rawls lamented, "I asked for a bigger venue and they denied me... I knew it was going to be crowded. I needed a 5,000 seat arena, but I couldn't get a taker, so I had to take what I could get."

For the fans lucky enough to get in, Rawls made the show worth the effort. He announces the games like Marv Albert crossed with Mars Blackmon. Every player has nickname. Ty Lawson is The Destroyer The Show Stopper, John Wall is Game-Changer, Hugh Jones, a D.C. streetball legend, is either The Destroyer or Baby Shaq. And with the best nickname of all, DeMarcus Cousins is Bad Attitude.

With Miles on the mic and a DJ spinning tracks during timeouts, games double as a sort of block party. Capital Punishment was the biggest party yet for Rawls. As the game tipped off, he announced, "I'm like Phil Collins, I been waitin' on this one all my life!"

From there, once the game got started, the crowd was treated to what was basically an NBA regular season game on steroids. There wasn't the intensity of, say, a playoff game, but it was better than an NBA All-Star Game, with just as many highlights. That was only part of the show, though. Meanwhile, vendors hawked mixtapes and Len Bias t-shirts in the aisles of the granstand, teenagers sold homemade food on the baseline, and everyone froze every few minutes with the latest jaw-dropping dunk.

Security was minimal if not invisible, but it never mattered. Maybe out of respect for Rawls or just respect for the event itself, nobody abused the privilege that came with being ten feet away from NBA superstars for two hours. Or maybe nobody wanted to risk getting kicked out, missing out on their chance to see the spectacle firsthand. In any case, the community event showcased a community that used basketball as an excuse to come out and party together peacefully.

Rawls carried things, of course.  When Durant crossed up James Harden to draw a foul, it was, "Foul on Harden... KD put him in the mixing bowl!" When John Wall sprinted up the court but blew the layup, it was, "John Wall went to the ATM but didn't have his card!"

Whenever a player rose for a dunk, it was "Watch ya heads!" 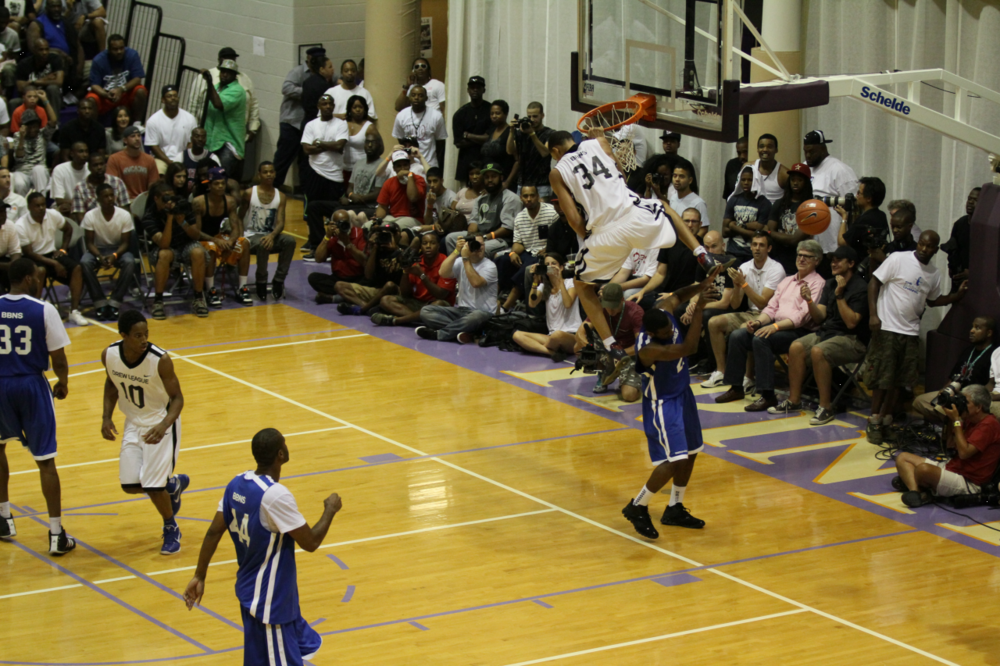 The game ended 135-134 with The Goodman League coming away with a win, but only after a controversial call sent Kevin Durant to the line to give D.C. the lead, before Brandon Jennings and James Harden missed game-winning shots for the Drew League at the end. But if you're looking for what made Saturday night special, the score was secondary.

After the buzzer sounded and fans rushed the court to take pictures and get autographs from superstars, I found Baby Shaq in the crowd and asked him about the evolution of the league he's played in for more than ten years. "I'm proud of it," he said. "It's like watching my daughter grow up. At first people were scared to come down, now it's in the newspapers, cameras... You see how big it's gotten. ... It's a court full of NBA players."

Elsewhere, Dino Smiley, the Drew League commissioner, talked about getting sponsors to help pay for more games like this. "This is something that everybody needs to see again," he said.

And of course, there was Rawls, standing at center court until the very end. Asked whether he thought his game was a success, he said, "Lived up to the hype, guys played hard on both ends, nobody was lackin, slackin. So, what more could you ask for?"

At this point, all we can ask for is more.Both teams from Saturday night are already in talks to stage a rematch, possibly in September, and Goodman League matchups with Baltimore and New York are in the works as well. All as basketball's endless summer rolls on...

If last summer's offseason had the feel of rock concert when LeBron James and the Miami Heat were introduced to a delirious stadium of Miami Heat fans, this summer's more like the indie scene. The last few months have been like one, long set of B-side basketball, and what the summer game lacks in polish it makes up for in character.

A thousand of fans showed up 90 minutes early on Saturday night, just to make sure they got a seat. Star players like Durant and Wall and Jennings play all year round, almost as a reflex, regardless of who's watching. Guys like Rawls and Smiley promote the games better than anyone, and keep the crowd in stitches. And in the end, players play and fans watch because none of us can help it.

Saturday night's event was goofy, entertaining, occasionally intense, and as fulfilling as anyone could have hoped. It was reassuring, too. The NBA may promote it better, but the soul of the game exists independent of any corporate interests. It lives in the bones of Durant, the player who never stops chasing his next game, and Rawls, the fan who moved mountains to make his dream a reality. Basketball's gone underground, and it's exposed the sport's roots like never before.

Think about it. You could never stage an exhibition football game during the NFL lockout. A charismatic announcer and a thousand fans wouldn't be enough to turn a baseball game into a spectacle. For that, you need a baseball stadium. But with basketball, we don't need the arenas the NBA built; players and fans will come regardless. So here's to hoping this lasts all year.

That shared love of the game in cities all over the country won't disappear without the NBA on ESPN. If anything, it's a lot more fun with someone like Miles Rawls taking over for David Stern.

And if the NBA lockout's destined to deprive us of a regular season and meaningful playoff games, then at least we can take solace. We may not have the NBA in our lives this year, but what happens instead might just remind us why we love basketball in the first place. 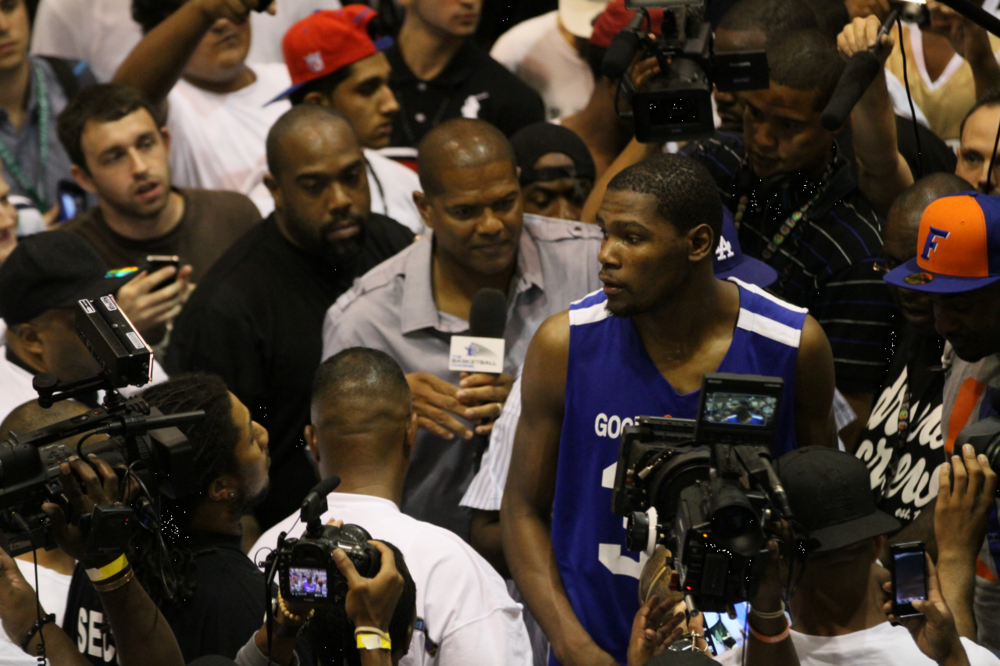 (All photos courtesy of the legendary @Jose3030. For more great photos, click here.)