How The NBA's New Money Changes Everything And Nothing

The NBA has seen an influx of new money in the past two years. Does it change anything? Also, ranking the NBA Alexes.

Share All sharing options for: How The NBA's New Money Changes Everything And Nothing

The NBA is full of new owners; when Alex Meruelo officially becomes the new majority owner of the Atlanta Hawks(and assuming Joshua Harris of the Philadelphis 76ers precedes him) he'll be the seventh new owner in the league since the start of 2010. That's a lot of new blood.

But there seems to be an assumption that all of the new blood comes in with stacked pockets relative to the old guard, that the new collection of owners is uniformly flush and as such can both afford to lose money to win and can raise the tide of the NBA.

The Venn diagram below sorts the NBA's team owners by how long they've owned their team (low tenure can be found north and west, long tenure south and east) and their reported net worth (lower end to the south and west, higher end to the north and east). This diagram is not to scale, but is a reasonable representation of rank. The 'dividing line' for tenure is, oddly enough, 1998, or the date of the last lockout. The dividing line for net worth is around $500 million. We only took the net worth of the majority owner into account. 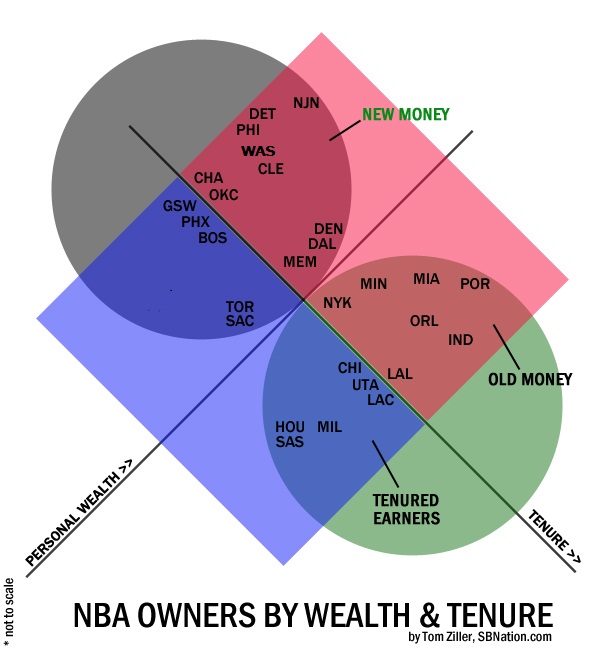 I've termed that owners above the $500 million net worth line who have purchased their team in the last 13 years to be "New Money." We didn't include Meruelo in this graphic because there have been no reports as to how much he's worth, and I won't hazard a guess. Of the other six new NBA owners, five fall into the "New Money" category and the other one -- Golden State's Joe Lacob -- comes pretty close. (Net worth figures are obviously fuzzy. One source claims Jerry Buss is worth less than $300 million, which is laughable.)

Of course, Larry Ellison (worth about $20 billion, or roughly what Paul Allen and Mikhail Prokhorov are worth) bid for the Warriors and almost captured them; he tried to bid more than Lacob's $450 million, but the firm handling the deal for old Warriors soulsucker Chris Cohan shut down the bid window. In that alternate reality, all six of the last sales would have been to upper echelon (in terms of wealth) new owners.

But what's that actually mean for the league? What's it mean for fans?

That's the question that will truly decide how this new crop of ultra-rich owners affects the NBA, and I fear we're getting our answer right now: profits and losses still matter ... a lot. Right now, NBA franchises are good value buys that run the risk of annual losses. You don't "win" in many markets until you sell. Instead of accepting that, the owners are pushing to eliminate even that comparatively small risk and make owning an NBA team lucrative in the small and long terms. Owners don't want to sit on their investment and watch its value grow over time. They want to extract an annual income in addition to that.

And they seem willing to kill an entire season of basketball to win that concession, which is no way to treat their paying customers.

In honor of the Hawks' new owner, here are the authoritative Alex Power Rankings.

English over Hannum, a two-time NBA championship and one-time ABA championship coach, will be controversial to some. It was English, David Thompson and Dr. J who brought back the stylish scoring small forward trope. And now, a highlight video narrated by Nick Van Exel:

As you can see, the Alex Power Rankings are not very deep.

An original NBA player who only lasted two seasons, but later coached a bit in the ABA and ran the Rockets' front office for a spell.

Don't make me regret this, Alexis!

Told you they weren't deep.

The Hook is a daily NBA column written by Tom Ziller that runs on SBNation.com Monday through Friday. See the archives.