NBA's Basketball Without Borders Focuses On More Than Just The Sport

SB Nation and Denver Stiffs' Andrew Feinstein continues his reporting from Africa, this time from Day 1 of the NBA's Basketball Without Borders camp taking place in Johannesburg, South Africa.

Share All sharing options for: NBA's Basketball Without Borders Focuses On More Than Just The Sport

Andrew Feinstein of SB Nation's Nuggets blog Denver Stiffs attended FIBA Afrobasket last week, and now joins the NBA in Johannesburg, South Africa, for the 2011 edition of Basketball Without Borders. See Andrew's stories on the future of African basketball and what's needed to build the hoop infrastructure on the continent.

JOHANNESBURG, SOUTH AFRICA -- "This is a once-in-a-lifetime opportunity," says a towering Dikembe Mutombo in front of 60 eager teenagers collected from African countries ranging from Egypt to Nigeria to South Africa. "But with great opportunity comes great responsibility."

Mutombo is kicking off the first day of the NBA's annual Basketball Without Borders program, an international effort by the league to bring the world's best basketball-playing teenagers together for camps guided by NBA players, coaches and scouts. BWB celebrates its 10th anniversary this year, and its ninth straight year of having a camp based in Africa. 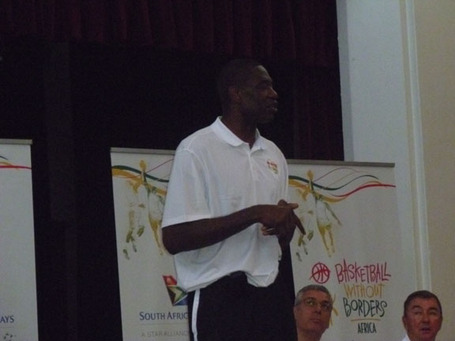 The campers are attentive and sitting upright, having been lectured before Mutombo's speech on how to comport one's self at the camp ... and beyond. Each is wearing brand new Nike sneakers and Nike-sponsored uniforms, likely the best gear they've had to date in their young basketball careers.

"Sixty-five percent of Africans are under 15 years old," Mutombo adds. "But we need good young leaders in Africa. You can all be leaders. Use this opportunity to learn English, get an education and make friends. And then bring what you learn back to Africa and improve your countries. Most of you will not be basketball players. But that does not mean you aren't a success. Just being here means you are a success."

And Mutombo concludes with: "If you make no friends in life, every door and window will be shut for you. Now remember that and have a great camp!" The kids erupt with a boisterous standing ovation and the 2011 BWB Africa camp is off and running.

As if Mutombo needed proof of his message other than his own remarkable life story, sitting beside him were three other sons of Africa who have successfully used basketball, and their friendships through basketball, as a tool to build careers beyond just playing the game: NBA Africa vice president Amadou Gallo Fall of Senegal, Denver Nuggets vice president Masai Ujiri of Nigeria and NBA Africa's Frank Traore, a former BWB Africa camper from Burkina Faso now working with Fall at the NBA's Africa office.

After Mutombo's pep talk, it's off to get coached at the nearby King Edward's School, where four pristine outdoor courts await these campers, three for the boys and one for the girls. But much more than just good courts are waiting for these aspiring ballers. The tallest kids -- the centers -- will be coached by none other than Mutombo himself and Hall of Famer Patrick Ewing. The forwards will be coached by NBA veteran Bo Outlaw. The guards will be mentored by NBA vets Jeff Hornacek and Dee Brown. In addition, a collection of NBA coaches and scouts, including the Memphis Grizzlies' Lionel Hollins (coming off his squad's inspiring playoff run), are on hand for the clinics. And incoming is NBA legend Alonzo Mourning and New Orleans Hornets' head coach Monty Williams, both of whom will be participating for Days 2-4 of the camp. And the girls -- 25 of South Africa's top high school players -- will be coached by ex-WNBA stars Edna Campbell and Tamika Raymond. 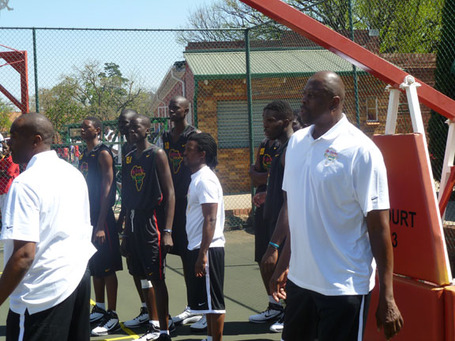 Over the next four days, these kids, ranging from 15 to 18 years old, will be taught an assortment of basketball skills from the experts, will be drafted into teams and will participate in some community work along the way. They will room with strangers, eat with strangers and learn from strangers. And most have never been out of their home country. The NBA and its sponsors not only pay for all of these kids to be here in Johannesburg, including flight, lodging and meals, but it brings an entourage of personnel (including a full training staff for injuries) and special guests along for the ride. The logistics aren't easy and it's a great credit to the NBA's vice president of international basketball operations Kim Bohuny, Fall and their respective staffs that they can pull this off every year without any hiccups.

By any measure Basketball Without Borders has been a success around the globe. Sixty-seven former participants are currently playing in American colleges, 17 have played or are playing in the NBA (including five from Africa) and more are on the way, including Nigeria's Chukwudiebere "Chu Chu" Maduabum, drafted by Ujiri for the Nuggets late in the second round of this past summer's NBA Draft. And with each subsequent player making it to the NBA, more exposure to the game is brought back to their respective countries, which in theory brings more attention to the need for better coaching and better facilities, something we discussed at length during the FIBA Afrobasket championships in Madagascar last weekend. Of the 60 kids participating in this camp here in Johannesburg, it's believed among the NBA experts here that between 15 and 20 will find their way onto an American college team and one or two could be in the NBA in a few years.

Fall and Ujiri (who also holds the title of camp co-director along with Phoenix Suns' general manager Lance Blanks) work with local African federations and FIBA to bring the continent's best young players to this camp. But when they arrive, they are on the NBA's watch.

"I am the sergeant general here," says Ujiri to the campers as he goes over everything from language to good sportsmanship to always running between drilling. And the dress code? "Keep your shorts up!" jokes Ujiri as he lets his shorts hang half way down his backside. 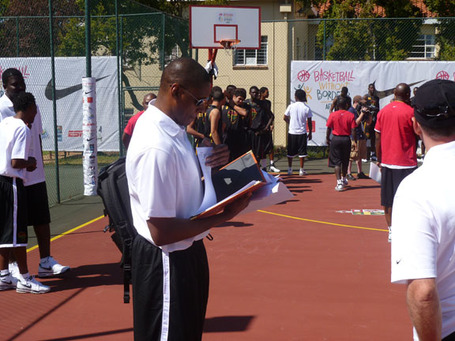 The sergeant general of the camp: co-director Masai Ujiri.

Watching the kids participating in their initial drills with their respective coaches and NBA mentors, a few things immediately stand out: they're phenomenally athletic, they love to play, they play hard and they're incredibly raw skill-wise. As one of the scouts here said to me: "In Europe, we have the coaching but not the athleticism. In Africa, we have the athleticism but not the coaching." And since you can't coach height and you can't coach athleticism, the sky is the limit for the future of African basketball. But without programs like BWB, one wonders how many of these kids will ever get the coaching and/or exposure they need.

After putting the young players through their paces for a few hours in the hot South African sun, the NBA players and coaches put on a clinic for a group of South African Special Olympic athletes. Many of these athletes participated in the World Summer Games which took place recently in Athens, Greece. Mutombo was there in his role as the NBA's Global Ambassador. Mutombo's title may be "Ambassador", but it should be "Prince." His passion for basketball and all-things-Africa is infectious, and even though the NBA had him up at six o'clock in the morning to do interviews, he went through this entire (very long) day with a smile. 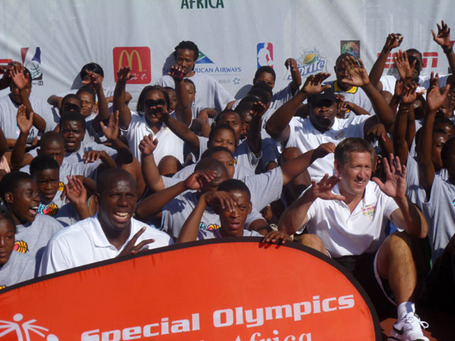 As the Special Olympic athletes depart, the BWB campers come back for afternoon scrimmages. These are hotly contested as they are playing to get "drafted" by the NBA coaches, scouts and players that evening. As elbows fly, shots are feverishly made and missed, and thunderous dunks shake the rim, the coaches and scouts diligently take notes in preparation for the draft. Even here at a camp for goodwill, these NBA guys are fiercely competitive and want an edge on their colleagues as they play a tournament in the days to come. The camp will culminate with an All-Star game on Sunday featuring the standout players.

Throughout the day, I'm struck by the camaraderie among the former NBA players. I overhear Hornacek and Outlaw talking trash to Mutombo about his free-flowing elbows during his NBA days, only to act innocently whenever a referee called him out on it. Mutombo cracks back that they just couldn't handle him in the low post, to which Ewing responds that no one could handle him in the post. They all crack on Outlaw -- the class clown of the group -- for only being able to play defense and defense only, to which Outlaw proudly says: "That's right! Thank god for defense! That's how I got paid!" And they all laugh collectively as old friends do when reunited.

Seeing these legendary players interacting up close, and from birthplaces as diverse as suburban Chicago (Hornacek), Jamaica (Ewing), Jacksonville (Brown), San Antonio (Outlaw) and Kinshasa (Mutombo), I can't help but think of what a unique, special fraternity these guys are members of to have had the privilege of playing in the NBA. And here they are now, all a little older, a little heavier and a little grayer than their playing days, giving back to the sport that gave them so much. They are the embodiment of Mutombo's vision laid out to the 2011 BWB campers at St. John's Academy just hours earlier: they have used basketball as a tool to get educated, make friends and build careers beyond their playing days. 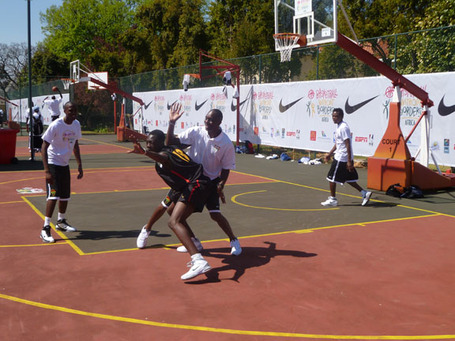 Dee Brown teaches aspiring guards how to hold off a defender and catch an inbounds pass.

All we know now is it will be fun to watch these kids grow over the next few days and the next few years. Thanks to the NBA, their basketball odyssey and their pathway to becoming tomorrow's African leaders has just begun. 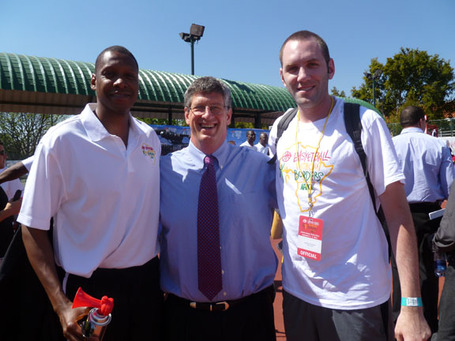