How are great offenses organized? Some, like the Oklahoma City Thunder and Miami Heat, involve two big stars. Others, like the L.A. Lakers, let one man take the reins. Still others, like the Dallas Mavericks and Houston Rockets, rely on balance. Then there are the Minnesota Timberwolves ...

Share All sharing options for: Creating An NBA Offense: Star Duos, Solo Artists And Balanced Outfits Can All Work

In looking at how Kevin Durant gets shots, and what a great role Russell Westbrook plays in KD's production, my interest in team-wide offensive relationships perked up. If Russell is the creator and KD is a taker, what of James Harden, a playmaking two-guard? And how does this work on other teams? How does the KD-Russ relationship work compared to that other notable high-usage duo?

I took a look at six teams in total, five of which had good-to-great offenses and one ... well, you'll see. I used stacked column graphs to look at players' shots created and shots "taken" per 36 minutes. (Because both are included, you also get a sense of players' Creation Ratios.) A "taken shot" is a shot from which a player's teammate would earn an assist - if Russ hits Serge Ibaka with an alley-oop, that's a "taken shot" for Serge, because he didn't create it. A created shot is either an assist or an unassisted own field goal attempt or pair of free throws. We have to use estimates throughout, because the league doesn't track potential assists or assisted free throws.

Let's start with the Thunder. 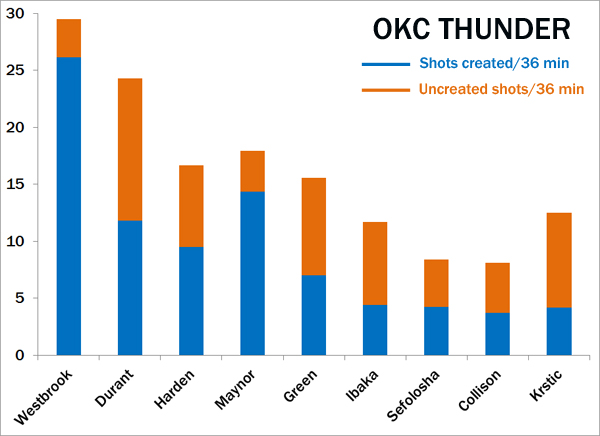 We're familiar with the Russ-KD storyline by now: Westbrook creates an extraordinary number of shots - more than anyone else in the league - while Durant surprisingly uses up as many pre-fabricated shots as he creates himself. Durant plays like a big man: he has a high rate of assisted field goals (above 60 percent) and a low number of assists. But, given his two scoring titles by age 22, I'd say it's working okay.

Harden and back-up point guard Eric Maynor are the only two other Thunderers who create and use a combined 15 shots or more per 36 minutes; overall, this is a fairly unbalanced team, with two high-usage players and a number of roleplayers. Harden, interestingly enough, is a bit of a creator: he creates 1.3 shots for every one used, a mark slightly above the positional average of 1.2. You do wonder how Harden's bench role - and the resultant fewer minutes on the court with Westbrook - affects that. If he replaced low-usage Thabo Sefolosha as the starting two-guard, would his created shot rate go down, or would he cut into Westbrook?

So that's one team with a clearcut high-usage duo. What about that other famous pair? 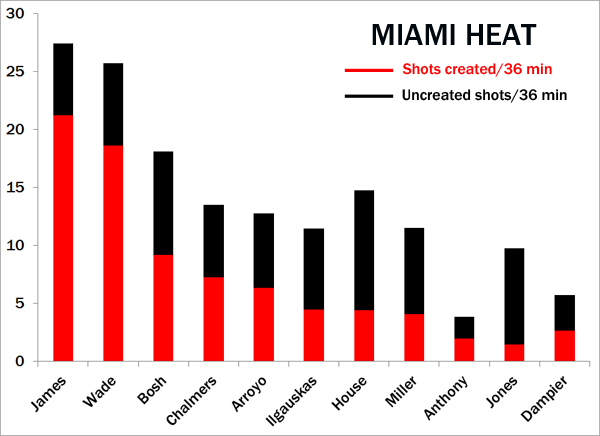 The Heat are a lot like the Thunder: two high-usage stars, one moderately high-usage supplemental scorer and roleplayers galore. For Miami, of course, the top producers are LeBron James and Dwyane Wade, and the third wheel is Chris Bosh. Bosh is more a traditional third wheel than Harden, in that he's not a more frequent creator than taker: he clearly plays off of his Big Two. Bosh's Creation Ratio is 1.02, fairly standard for a scoring big man.

Now, a lot of these shots are created for themselves. Per Hoopdata, only 32 percent of LeBron's total field goals were assisted, and Wade's mark was at 36 percent. In large part, this is a case of two high-scorers feeding themselves and their teammates. In OKC, one of the high scorers is feeding himself and his partner and everyone else. Miami has two chefs in the kitchen. OKC has one.

Now let's move to a team with one chef in the kitchen. One very selfish chef. 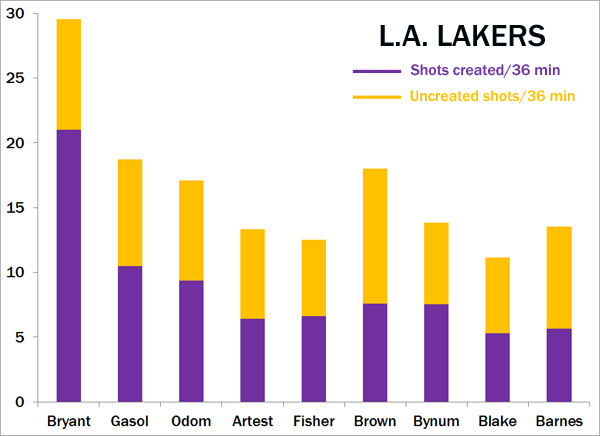 Kobe Bryant creates and uses almost 30 shots per 36 minutes, more than any player in the league. The other players in the top five are point guards with high assist rates and LeBron, who has a point guard's assist rate. Meanwhile, no one else on the Lakers really stands out in terms of per-minute shot usage: Pau Gasol is right around third-wheel status because everyone tends to take quite a few shots. Shannon Brown, a point-guardy back-up, is up there with Pau, and Lamar Odom isn't far behind.

Andrew Bynum, he who desires to become the next Kobe of this team, is an interesting case. He's unlike other big men in that he creates a majority of his (relatively few) opportunities. Some of that will be attributed to offensive rebounding - tip shots count as created shots - but it's interesting nonetheless. If he wants more shots next season, who's going to create them? Is he going to do it? Is he expecting Kobe to set him up? God, I can't wait to see that implode.

Let's do another verse on the one-star style. 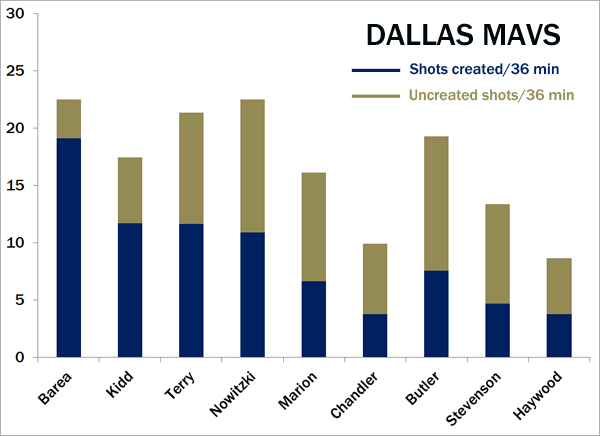 From our earlier forays into shot creation, you'll remember that Dirk Nowitzki isn't wholly unlike KD: he's not a big-time creator, though he uses plenty of shots. But as it turns out, Nowitzki isn't a player who soaks up a ton of shots period, at least not now and not relative to his teammates. Despite lacking a second offensive star, Nowitzki's shot rate is downright mundane: he actually trails back-up J.J. Barea in shots per minute. That's a function of Barea's role - he's supposed to be instant offense, and he's not out there for his defense - but it also speaks to Nowitzki's complete unKobeness.

Kobe has elite help but is wired to take as many shots as possible. Dirk had limited help, but didn't dominate the ball. Nowitzki let Jason Kidd create for him, and he created a decent amount for himself. But he refused to soak up a huge chunk of the offense. Whether that's good or bad is left unanswered: at many points last season, the Mavericks would have been better off with a more selfish Dirk, but it's impossible to quibble with the final results.

The Mavs had a one-star system that ended up balanced. Wouldn't a no-star system end up the same way?

One of the great mysteries of the 2010-11 season is how the Rockets ended up with the No. 4 offense in the NBA. Kevin Martin's brilliant, and Luis Scola is a beast. Kyle Lowry deserves all of your accolades. But Martin has always been considered an odd fit, Scola isn't terribly efficient and Lowry is known more for his defense. The other pieces were not huge offensive masters: Shane Battier and trigger-happy Aaron Brooks until the trade deadline, Chase Budinger and Courtney Lee otherwise. This was a weird team ... that was excellent on offense.

It was pretty balanced, too. 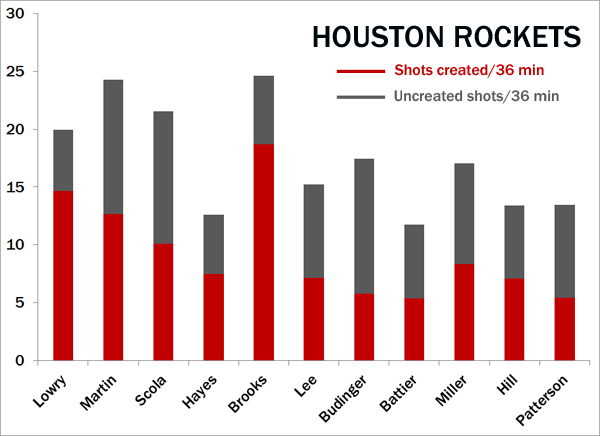 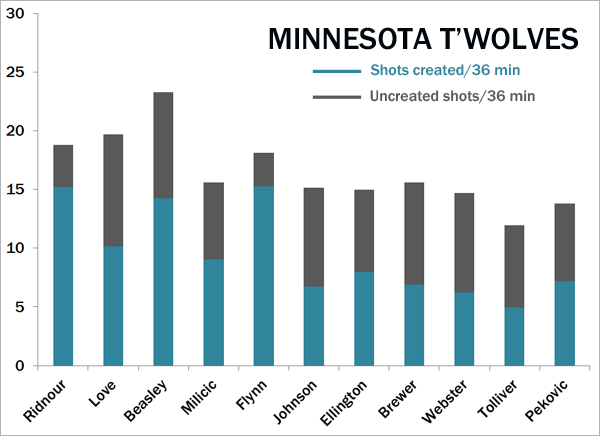 That is the saddest graph I have ever made. It's almost as if no one wanted to take responsibility for that mess.

Kevin Love has the typical supplemental scorer big man thing going ... even though he was the only decent offensive player on the roster and should have had a Kobe-like column. Michael Beasley is being Michael Beasley. Luke Ridnour and Jonny Flynn created more than they took. Corey Brewer ... Martell Webster ... pass the Paxil, please.

The Hook runs Monday through Friday. See the archives.