Mapping The NBA: Blazers, Heat Only Teams Playing Much Faster

Coaches always say that their teams will run more at the start of each season, but it almost never comes true. But the Portland Trail Blazers and Miami Heat are cashing those checks right now. Plus: Kobe Bryant's Elysian quest.

Share All sharing options for: Mapping The NBA: Blazers, Heat Only Teams Playing Much Faster

Those players almost never put on 15 pounds of muscle, for the record. And those coaches who claim that their teams are going to go up-tempo almost never cash that check. It's an easy, crowd-pleasing thing to say, something that will flitter through local airwaves and get fans excited -- who doesn't love up-tempo basketball? -- but will dissolve completely by the second week of the season.

So has been the case this year.

Per usual, most teams are playing at roughly the pace they did last season. There are two major exceptions, and two more exceptions, and our Pace Map shows their identities. 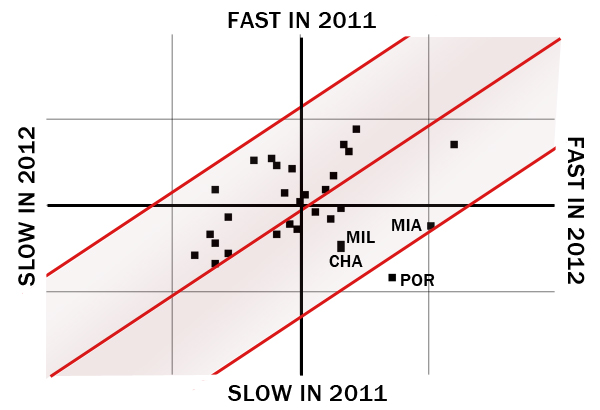 The x axis represents teams' possessions per game in the young 2011-12 season. The y axis represents possessions per game in 2010-11. If teams remained close to their '10-11 performance this season, you'd expect them to be near the upward sloping line that goes through the middle. As it turns out, most teams do fall right around there: squad who were of average pace in 2011 are likely of average pace in 2012. Down-tempo teams of 2011 are likely down-tempo in 2012. Up-tempo team of 2011 are likely up-tempo in 2012.

There's one, massive exception: the Portland Trail Blazers. Our Mike Prada recently wrote extensively about the Blazers' up-tempo reformation. Much as the San Antonio Spurs did a year ago, the Blazers look to rack up as many easy baskets in transition, capitalizing on Gerald Wallace's unreal energy level and the team's youth. (Marcus Camby excepted.) This was an absolute sea change for the franchise and coach Nate McMillan, who has run some of the most deliberate teams in the NBA during his tenure in Portland.

The other team cranking it up compared to 2011 is the Miami Heat. Coach Erik Spolestra made references to being inspired by Oregon football's spread offense in pushing the Heat to go more up-tempo to better use its superior athletes. It's working. The Heat are No. 2 in pace this season (behind the Denver Nuggets) after finishing below average in pace last season. Miami's offense is efficient at any speed. While the playoffs tend to slow down universally, having the confidence to run for stretches could be a nice asset once May and June roll around. Miami just has so many ways to kill you.

Two other teams are worth mentioning: the Milwaukee Bucks and Charlotte Bobcats. Both have gotten somewhat faster, mostly because they were both so down-tempo last season. Now, each is a bit more up-tempo than average. This could be noise from a small sample size, or it could be a concerted effort from Scott Skiles and Paul Silas to use young legs to make a difference in the condensed season. It's worth noting that while the Bucks continue to hang their hat on defense (typically anathema to a high pace, though not always, as George Karl has taught us over the years), the Bobcats have seen their defense completely decimated over the last 18 months by trades sending out Tyson Chandler, Gerald Wallace and Stephen Jackson. If Silas turns Charlotte into a team with more of an offensive identity (which might require playing against the New York Knicks 66 times), that could fit with a pace increase.

Yahoo!'s Adrian Wojnarowski writes of Kobe Bryant's defiance and commitment in the face of a torn wrist ligament that should have left him in surgery and on the shelf until March. NBA fans, hell even L.A. Lakers fans, could easily take some bit of contempt and admiration for Kobe's current pose, which is that if his team goes down, at least it will go down with Bryant taking 25 shots a game.

In the piece, Kobe commends Pau Gasol and Andrew Bynum, and says that the Lakers have a 'Big Three' to match that of anybody else. But Bryant's continued lack of willingness to believe that reality on the court -- that Pau and Bynum are as important or more so on offense, and deserve a lot more touches -- has to draw sighs from Lakers faithful who have seen this before. Everything must be a struggle with Kobe. Power is imbued in everything, and Bryant won't concede a centimeter.

It's funny that we commend Kobe for his fighter's mentality while so many rip LeBron James for refusing to take the Heat's reins by force. It'll be interesting to see how the two are taken by the wider world of sports observation should LeBron's path lead to a title while the Lakers spin out of control in the playoffs as Kobe shoots erratically.