VIDEO: Those Fans Weren't Actually On The Mavs' Bench, You Guys

Share All sharing options for: VIDEO: Those Fans Weren't Actually On The Mavs' Bench, You Guys

There's a funny video floating around the internet (and inserted into the SportsCenter rotation) showing a couple of hipsters who appear to be sitting on the Mavericks' bench during Tuesday's game in Detroit, nestled between Vince Carter and Delonte West while sipping on a beverage. How did those chill bros get there? Why didn't security haul them out? The internet wants to know!

Unfortunately, the answer is kind of boring: they're not actually on the bench. Check out the video below, and I'll explain.

If you look closely, you can see that the chill bros (and Vince Carter) are sitting in big, plush chairs, while West (and the rest of the Mavs) are sitting on folding chairs. Those plush chairs are VIP seats immediately next to the bench that anyone can buy -- so what's actually happening is that Carter is sitting in the stands, not fans sitting on the bench.

As a Pistons blogger who's been credentialed for a game or two, I've often seen players take over those seats at the beginning of games and after halftime before fans arrive -- they're bigger and more comfortable. My hunch is that the chill dudes took their time coming back from halftime and found them occupied -- but instead of Carter sliding to the actual bench, he simply moved over to another comfortable chair. (And why not? The Mavs were blowing out the Pistons, and Carter was done for the night.)

But that's just a guess. As to why Pistons announcers George Blaha and Greg Kelser didn't figure that out ... I have no idea. In either case, kudos to Larry Brown Sports, who identified our hipster friends through some nifty Twitter sleuthing:

It turns out the fans in question are Aaron Cohen, a fashion designer who runs a clothing company called Revive, and a guy who goes by Chris Smokes on Twitter. Cohen is from the Michigan area, so we're guessing the seats came from the Pistons, not Mark Cuban or the Mavericks.

Cohen has also tweeted pictures from courtside seats in the past, but we're guessing this is the first time he's sat between players. 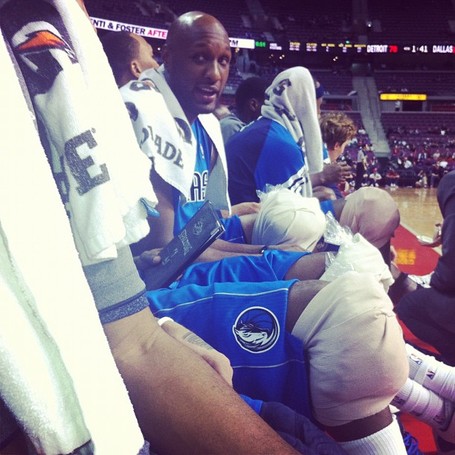