The Washington Wizards Win, And Their Locker Room Is A Fun Place

Share All sharing options for: The Washington Wizards Win, And Their Locker Room Is A Fun Place

There are many reasons why I enjoy seeing the Washington Wizards win basketball games. Most notably, I've been a fan of the team since I was a little kid. But in addition to that, I'll make a strong assertion: no team provides more funny moments after a win than these Wizards.

You want evidence? The following things happened in the team's locker room following its 93-78 win over the Toronto Raptors on Tuesday night:

Nick Young's locker looked like a normal NBA locker, except for one thing: a pack of red candy that closely resembled a bag of Twizzlers. Someone asked Young about them, and he revealed that he handed a bunch out to teammates in the day before the game.

The only problem? They weren't Twizzlers. They were actually Red Vines. Here's photographic proof. 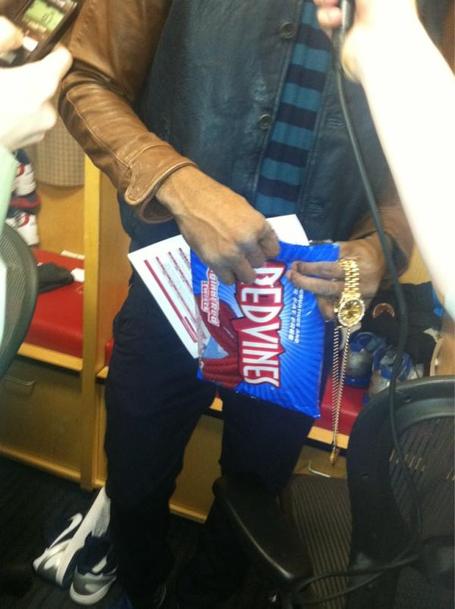 Someone pointed out the error to Young, and he seemed genuinely confused. Then, he pitched Red Vines to sponsor the team.

"I might have to give them a call," he said. "They might want to sponsor this. It would be good advertising. Now, I have to pay for this."

Young also said -- with a smile, of course -- that rookie Jan Vesely "took my spot for the fan favorite" and said he was a little jealous. Vesely was asked about this, and he smiled and gave a platitude about how it was a team effort. Guess he didn't go along with the joke.

Finally, Young was asked about the game's atmosphere.

Keep in mind: this was the same game for which 30-cent tickets were available on Stubhub.

The Wizards have a new, corny tradition where they hand out a hard hat to the player who works the hardest in practice. This is a professional team, mind you. So after their first win of the season, I had to ask which player got the hard hat.

I soon learned that the answer was nobody. Instead, the Wizards have a new new tradition: a game-changer coin. Basically, the team gives out some sort of special coin that says "Game-changer" on it to whichever player changes the game. It had only been given out one other time before Vesely got it on Tuesday.

That's about all I can tell you about the coin. John Wall described it in about as vague terms as anyone else.

Gee, thanks John. Vesely wouldn't let me see it, only saying it was in his locker. Harrison Goodman (@GoodmanHarrison) stole the obvious joke.

Trevor Booker, on how he was able to stay down on all of Andrea Bargnani's pump fakes:

"The coaches bet me I would go for one of his pump fakes. So I just told myself to stay on the ground."

Why don't the coaches do this with JaVale McGee?

"One of my assistants said to me kiddingly, 'It's January 12. We're six and a half games behind Chicago. It's probably the closest we've been in the conference in the last five years.'"

And finally, the stormy cloud on the horizon

Here's Andray Blatche, talking about Saunders' decision to bench him and put Booker in the starting lineup:

"It's fine to me, as long as we winning. If we're not winning, then that's when everything change."

I'm sure this will end well.

For more on the Wizards, visit Bullets Forever and SB Nation D.C.