Are The Boston Celtics Toast? On Defense, Age And The Healing Powers Of Mickael Pietrus

Share All sharing options for: Are The Boston Celtics Toast? On Defense, Age And The Healing Powers Of Mickael Pietrus

After a Monday home loss to an elite Oklahoma City Thunder club, the Boston Celtics sit at 4-8, 1.5 games out of the No. 8 seed in the East and some 5.5 games behind the Philadelphia 76ers in the Atlantic. (Boston would likely need to eclipse Philadelphia to grab a top-four seed and home court advantage in the first round, considering that either the Central or Southeast or both will have two teams better than the C's.) The Celtics have been sliding in the past couple seasons, watching the championship window close slowly. But this has been a jarring start in every way.

Boston has, at times, struggled on offense in the Kevin Garnett-Ray Allen era. Rajon Rondo's development, Allen's ability to shoot as well as ever and Paul Pierce's continued isolation excellence have kept the Celtics competitive on that end in the past couple seasons, but this isn't where Boston has made its mark. So seeing that the Celtics rank No. 20 in offense this season, especially with Pierce having missed a few games -- it's not a surprise.

That No. 21 rank on defense, though, is a stunner.

Boston basically tied Chicago for No. 1 in defense last season, and has finished no lower than No. 5 since the Garnett trade in 2007. In that first season, Boston -- with this very same four-person core -- had one of the best defensive campaigns in modern history. Now, four years later, it is ranked No. 21, a dramatic fall that has caused a real identity crisis for the club on the court.

In what areas has the defense fallen? 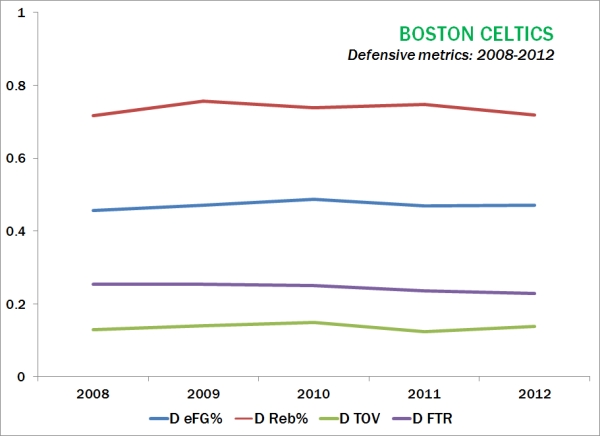 In only one area, defensive rebound rate, has Boston seen a fall-off this season. Even then, this season, the team's rebounding is on par with that 2008 season.

The rates are virtually the same, yet the Celtics have gone from No. 1 to No. 21.

Surprise! With a short training camp, more games per week and thus far less practice time, teams are shooting far worse than normal. Last season, NBA players had an average eFG of .498, which equates to 0.996 points per FGA. This season to date, that's down to .480 eFG or 0.96 points per FGA.

So when the Celtics remain flat over last year, that is actually much, much worse. The rest of the leaguewide defensive four factors aren't terribly different; turnovers are up a bit, and Boston's relative performance there has slipped though its rate looks flat year-over-year. But the shooting defense is the thing.

Last year, Boston's shooting defense held opponents to 0.058 points per FGA fewer than the average defense. That seems small, but with an average of 80 field goal attempts per team per game, that comes out to a difference over average of 4.64 points per game.

There are a few things that could help Boston bounce back. First of all, they have been a bit unlucky. The Celtics have the point differential of a 5-7 team, despite the 4-8 record. (Woo!) It seems small, but a 5-7 team looks a lot better in the standings than a 4-8 team. There's something about the proportion of having twice as many losses as wins that looks especially ugly.

The better news is that Mickael Pietrus has supplanted Sasha Pavlovic in the rotation. And thank Red for that. Pavlovic remains the NBA's quintessential replacement level player, and he doesn't belong in the rotation for a championship hopeful. He was starting games for the Celtics this season. Due to Pierce's injury, Boston opened the season with a Pavlovic-Marquis Daniels rotation at small forward. Now it's Pierce-Pietrus. That's much better on both sides of the ball, but Pietrus is just a huge defensive upgrade over both of the squeezed out players.

Pavlovic has played all of 8 minutes, 40 seconds since New Year's. Daniels' 12 minutes on Monday was the first time he'd played at least 10 in a game in almost two weeks.

The other hope is that while the rest of the league begins to shoot better, Boston can maintain its current level of defense or improve. In the East, not exactly replete with elite offensive squads, that should be made easier. Don't get me wrong -- Boston is in a hole and needs things to start breaking right if the team is to have a shot at making the second round of the playoffs. But things aren't quite as bad as they would appear to be.