I'm embarrassed. I mean, I witnessed Chandler Parsons insta-GIF JaVale McGee in person on Monday in Washington. I see that he can dunk. But I didn't know that Chandler Parsons was MR. PUT-BACK DUNK™. Well, he is.

"He does it every game," Patrick Patterson told me. "Every single game." Patterson said the dunk on McGee -- AGAIN: THIS FRIGGIN' DUNK -- wasn't even the best of the season. Of course, Parsons did it again on Tuesday against the Pistons. I had to see more.

The 6-foot-10 rookie has putback dunks in five of his seven starts this season (and tip-ins in the other two) via the Houston Chronicle's Jonathan Feigan. Board this magic school bus and let's take a field trip to a place where fantastic things happen.

"I guess the scouting report should start saying to block me out." -- Chandler Parsons.

No kidding. So here is the Top Chandler Parsons Dunks of 2012 (So Far). Stealing Borrowing from Rockets legend Matt Bullard, we're calling it:

(1) Parsons (Kind of) Dunks on Blake Griffin, (Sort of) Stares Him Down

• Parsons: "Honestly, I was hanging on the rim and my legs got wrapped around him so I didn't want to fall on my head so I just hung on the rim until he got out of the way. I didn't mean to showboat or anything."

• Patterson: "Just because it was over McGee, I'll give it top three -- two or three. The way he hung on the rim, you know, wrapped his legs around him. He hung on the rim for like five seconds."

One hand on the dunk. Two hands on the fan reaction: 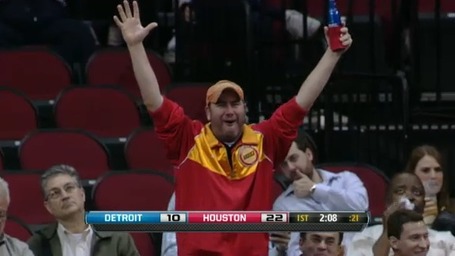 (5) Just Your Average Chandler Parsons, Run of the Mill Tip-Dunk

"He's got a knack for getting to the rim," Patterson said. "He seeks it out every single game, you know, he will get one."

Seriously, though. Find Chandler Parsons. Block him out. And even then, good luck.

Follow Chandler Parsons rookie escapades and the latest Rockets news and fan perspective at our Rockets blog, The Dream Shake.