Wizards-Thunder: Where Washington Remembers What It's Like To Win

The Wizards shocked Kevin Durant and the Thunder Wednesday night, and for one night, the worst team in the NBA reminded fans why it's worth it to stick with 'em through the bad times. This is the first entry of a semi-regular series where we'll be checking in with the Washington Wizards this season.

The Washington Wizards began this season in new uniforms with the slogan "New Traditions." Even though the team's identical to the group that lost 59 games last year, for some reason we were told to expect a new beginning. The slogan was probably the first sign that we--Wizards fans--were in for a rough year.

Now the season's less than a month old, and the team's already been called "sickening" and "embarrassing", and that's by one of their own players. As their coach described their starting lineup at one point, "Our plus-minus for that first group, I don’t know what it is. But it’s got to be in the minus-20s or something like that."

"I know that the media will pummel us with wicked pixels," wrote the owner. He made his fortune on the web, of course, so he's in on the joke. Mostly. (There was also the post where he wrote, "Facebook is the new oxygen – the world is breathing it in and 'likes' it.)

The team's most experienced veteran told a reporter earlier this month, "The sense of entitlement that’s here sometimes, I’ve never seen before."

The team's sixth man compared himself to Michael Jordan this summer. He's averaging eight points-per-game this year. Asked about his struggles, he explained, "The basketball gods been talking to me. They said: ‘Stay with it. You good.' It’s going to happen. It’s going to come. It’ll come to the light. Everything come to the light. I’m not tripping on it."

This is the player they named team captain on opening night:

Andray Blatche approached the scorers’ table to check in the second quarter of the Wizards’ 101-83 defeat at Philips Arena, when a heckler seated nearby decided to give him a hard time. The man shouted, "Have another burger, Dray!"

Blatche looked up, spotted the heckler and replied, "Got one?"

One day, four or five years from now when the Wizards are contending in the East and games are selling out, I swear it'll be funny to look back on this. 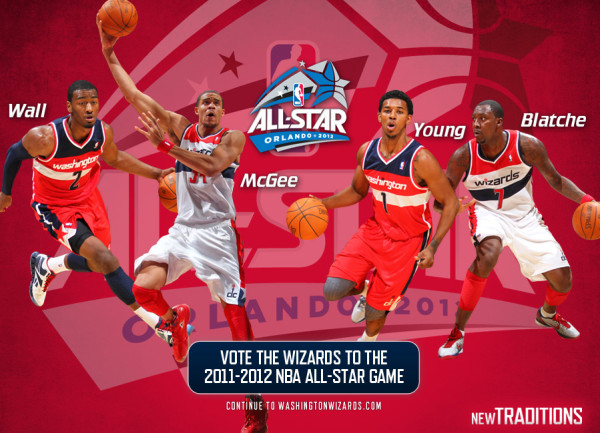 This is what Wizards fans have to tell ourselves.

For now, the #NewTraditions Wizards have been somewhere between excruciating and entertaining--in the same way that a natural disaster eventually becomes captivating as you wonder just how bad it can get. Wednesday night I went to the Wizards-Thunder game, and 20 minutes before tip-off there were about 400 people around the Verizon Center when our 2-12 Wizards ran out of the tunnel to a smattering of boos and indifference. So, how bad can it get? Let's see...

WE'RE EVEN BAD AT BOOING. It'd be one thing if this was a capacity crowd at Madison Square Garden chanting "Fire Isiah!" This was more like hearing a fanbase collectively groan. This is what rock bottom feels like. And hey that brings us to Andray Blatche!

He was booed in warmups and introductions, and the game couldn't have started much worse for him. After the play above a fan in back of me muttered, "Get Blatche out the game, man. Out the league." And then a pause. "These motherf***ers are awful, man."

Later, Blatche got the ball underneath the hoop again and pulled off one of the saddest travels you'll ever see in the NBA. More boos, and this time he actually bowed his head to acknowledge the boos and started walking to the bench. Except that he wasn't being pulled, maybe because Flip Saunders realized that at this point, the most effective punishment to Blatche would be to make him play 40 minutes of NBA basketball.

Or at lest, Blatche stopped finding new ways to get worse, the Wizards took out Javale McGee--the yin to Dray's yang of mediocrity--and the Wizards got better as a team. It started slow.

Blatche got into a tussle with Kendrick Perkins that got the crowd into it, and suddenly, whether it was the crowd or newfound motivation from Perk, Blatche was running the floor for the first time all year. A 7-point deficit turned into four as the first quarter came to an end. For the record, it's not a coincidence that this all happened with Javale McGee on the bench and Trevor Booker in the game.

Maybe other NBA fans would think it's sad how much Wizards fans adore Trevor Booker, because on a good team he's really nothing more than an 8th or 9th man. But Booker--overachieving, hardworking, tough as nails--is the polar opposite of everything that's defined the Wizards the past few years--perpetually ADHD, oozing raw athleticism and apathy in equal measure, easily pushed around. Booker's the human reminder that it won't be like this forever.

The Wizards took a 3-point lead midway through the second quarter on a gorgeous pass to Rashard Lewis for an emphatic dunk. I'm almost positive this was the first time Rashard has jumped all season.

It was definitely the loudest the Verizon Center's been all season. Russell Westbrook could do whatever he wanted, of course, and every few minutes Kevin Durant would make something so beautiful look so easy that it made everyone else on the court look awful by comparison.

But that's not the point.

Midway through the second quarter, my buddy pointed out that except for John Wall, anyone on the Thunder's bench would start for the Wizards--James Harden, Nick Collison, Nazr Mohammed, even Daquen Cook, probably. Then you have guys like Westbrook and Durant, who are so far out of the Wizards' universe it's not even worth discussing. AND WE WERE HANGING WITH THIS TEAM.

Even when the Thunder took back the lead going into halftime, the place was buzzing with a "Hey, this isn't as embarrassing as expected!" vibe. All this "scoring" and "defense" and "borderline competence" felt like a refreshing, completely unexpected bonus. The second half was the same.

The Thunder jumped out to a 12-point third quarter lead and the crowd went back into groaning mode, just like in the first quarter. But then, just like in the first quarter, the Wizards started chipping away at the lead and OKC went into sleepwalking mode. When Blatche hit a 30-foot fadeaway three as time expired in the third, it started to feel like, for the first time all year, the Wizards actually had karma working in their favor.

In the fourth quarter the Wizards went with what works. Which gives us an excuse to break down "what works" for the Wizards offense.

That's where the offense is right now. Those are the best (only?) options we have. But sometimes it works. And Wednesday, as the Wizards pulled even with OKC in the fourth, then pulled ahead, the crowd went crazy, the players fed off the energy, and the whole thing took on a life of its own. It worked. The guy sitting behind me muttered, "This is nuts, man."

After Nick Young hit a three to put the Wizards up 93-88 with time winding down, the crowd gave a standing ovation, and then stood for the entire final two minutes. It was fun to be at a Wizards game again. And even as the game became a free throw contest over the final minutes, the crowd continued going nuts like this was a playoff game. Then, finally, after missing just enough free throws to give OKC a chance, Kevin Durant's game-tying 35-footer rimmed out, and the Wizards won. SAY HELLO TO 2-12, Y'ALL.

It was ridiculous, it was probably a complete fluke, and it was really, really fun.

And more than anything Wednesday was a reminder of why it can be fun to cheer for horrible, horrible teams. They can be hilarious, embarrassing, and sometimes completely pathetic, but all the suffering just makes it that much sweeter when things somehow go right. Even just for a night. You could see it in the fans and even the players bouncing all over the court down the stretch, when everyone was reminded of how much fun Wizards games can be, and we all walked out in a better mood than when they arrived.

And for one night, we had an excuse to love it all.