Love Is Complicated, And David Kahn Reminds Everyone Why He's Famous

Kevin Love signed an extension with the Timberwolves, but of course it's not that simple. With David Kahn in Minnesota, it's never as simple as it should be. Plus: A look at the NBA's Zombie contenders, the pleasant surprises this year, the Heat without Dwyane Wade, and JR Smith in China.

Share All sharing options for: Love Is Complicated, And David Kahn Reminds Everyone Why He's Famous

It's way been too long since we did an NBA Talking Points, so we may as well dive right in. Kevin Love and the Timberwolves have been at the forefront of conversation in the NBA this week, and -- never one to miss an opportunity to drive the whole world crazy -- David Kahn has done it again.

Of course he did. Can you name the GM for the Milwaukee Bucks? The Denver Nuggets? The Utah Jazz? The Toronto Raptors? No, but you know David Kahn. He's literally famous for being horrible at his job. And you're surprised he completely botched a negotiation process that played out while the whole world was watching? That's TEXTBOOK David Kahn.

"I wanted to make a five year commitment," Love said. But David Kahn wouldn't offer him the five-year max deal he wanted, instead serving up a four-year, "mini-max" deal for $62 million. On this point, let's be clear: That's a lot of money. Nobody's weeping for Kevin Love. Salary's all relative, and even relative to other NBA big men, Love is getting PAID.

On the other hand ... he's been the lone bright spot in Minnesota the past two years, and even as Ricky Rubio's arrived this year and changed the whole trajectory of the franchise, it's still Kevin Love at the center of it all. Take Love away from this year's team and see what happens. More importantly: take Love away two years from now and see if Rubio stays. If Rubio's the straw that stirs the drink in Minnesota, then Kevin Love's the main ingredient to the drink itself. Lose him and you have Rubio stirring an empty glass.

So f Kevin Love wants five years, you give it to him. First, because it makes sense to lock him down as long as possible, and second, because it makes ZERO sense to piss off the linchpin of the entire franchise. And they definitely pissed him off. Not enough to sign somewhere else this summer or sign a qualifying offer -- because he likes playing in Minnesota, loves the fans, and loves this team -- but enough to leave the door open for an exit in 2015. This is insane on Minnesota's part.

Whether it was Kahn or T'Wolves owner Glen Taylor who refused to offer the five-year deal, the outcome's the same. Love signed for four years, but he demanded an opt-out clause in three years. And now he's A.) motivated to prove he's worth the max, and B) Bitter toward the T'Wolves management. He's got every reason to feel slighted by the way this went down. He's smart enough to know now's not the right time to leave, but he demanded that opt-out clause for a reason.

Now, if the T'Wolves are anything less than contenders in 2015, what's to stop Love from teaming up with a better supporting cast? After spending six years in freezing cold Minneapolis, playing for a bad team that doesn't totally appreciate you, wouldn't you? This is where Kahn and the T'Wolves management failed this week. You can't even give them credit for signing Love, because he actively wanted to be there long-term.

But instead of securing the Timberwolves foundation for the next five years, the T'Wolves have created a situation where they had better improve in the next three years, or else they risk losing Love all over again, when he can opt-out of his deal and become an unrestricted free agent.

And then they could lose Rubio.

And their new coach, Rick Adelman.

All at the same time. Instead of solidifying the future in Minnesota this week, suddenly you can't help but wonder about the worst case scenario that just became a distinct possibility.

And if that happens, it'll just be Kahn again in Minnesota, grasping at straws and stirring an empty glass, trying to figure out why everyone else thinks he's drunk. But then, that's what made him famous.

THE WALKING DEAD. I was at the Wizards-Bobcats game last night, and you would think that's just about the most depressing matchup you could possibly get from the NBA this year, but you'd be wrong. Those teams are horrible, but at least there's a lottery pick on the horizon. Instead, the most depressing teams are the ones who clearly don't have a shot at an NBA title anytime soon, but have too many stars to justify rebuilding. The Zombie contenders, if you will. This year we have several.

The Celtics. Good GOD this team is depressing this year. It's like Michael Jordan on the Wizards, but five times over. Jermaine O'Neal, Kevin Garnett, Ray Allen, Paul Pierce dragging himself up the court ... somebody, anybody, please. Euthanize the Celtics before this gets any worse.

The Lakers. Watching Kobe Bryant gun his way into the sunset is actually going to be a lot of fun. I swear to God he's going to take 50 shots one of these days. On the other hand, watching the Lakers depend on Josh McRoberts, Matt Barnes and fossilized Derek Fisher just makes me sad.

The Spurs. We're about six months away from RC Buford blowing up the whole team and starting from scratch. And frankly, that's already about nine months overdue.

The Knicks. GAHHHHHHHHH the Knicks. Amar'e Stoudemire is hobbling all over the place, Carmelo Anthony is in Kobe-mode, Tyson Chandler has been more or less invisible and the rest of the roster is as close to a landfill as a basketball team will ever get. Also, we're about three more weeks of mediocrity from everyone openly hating each other in New York, including fans and media. But hey, Baron Davis is on the way!

GROWING UP BEFORE OUR EYES. After winter there's spring, and as the flowers fall off teams like the Lakers and Celtics, we have others budding right before our eyes. Three, to be exact.

The Blazers. Young, deep, hyper-athletic, and built around LaMarcus Aldridge, who's quietly become the best power forward in the entire NBA. Every time the Spurs make you sad, just remember that Portland's a younger, more exciting version of what they used to be.

The Pacers. Ditto with the Sixers, except with David West and Danny Granger, they've got two guys who are good enough to deliver in crunch time, making them more intriguing come playoff time. Wednesday they became the first team to beat the Bulls at home this year, and it wasn't an accident. From top to bottom, Indiana's roster is as solid as any team in the league. 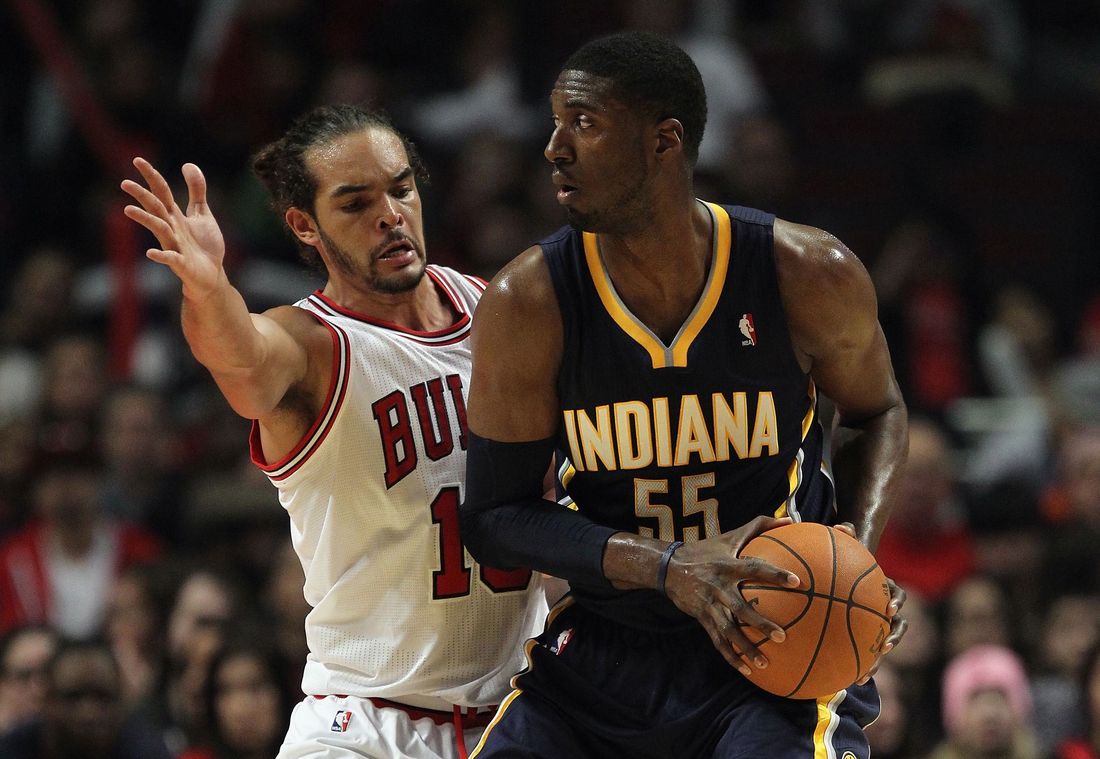 Enjoy these teams. Savor them. Savor every word of this Roy Hibbert interview, for instance. Soon they will be contenders with thorns, and we'll all have different reasons to root against them. For now though, they're a breathe of fresh air during an ugly, ugly season.

"ARE THE HEAT BETTER WITHOUT WADE?" Since you've probably been bludgeoned to death by Skip Baylesses talking about this very question for the past 18 months, we'll be quick. The Heat have looked great without Dwyane Wade so far this season, and in particular LeBron and Chris Bosh have looked better than ever. This is how "Are the Heat better without Wade?" has become a legitimate talking point this season. It's a fair question, even if the answer's ultimately no. Because while Wade may be key to the Miami's title chase this year, LeBron is definitely better without him, and Bosh looks better, as well. The real answer here: "No, but watching LeBron without Wade makes us all wish he'd gone somewhere else, because watching LeBron unleash the full force of his powers is still the most incredible sight in the NBA today." And it just doesn't happen very often when he's playing next to Wade.

I'm pretty sure this means we should all take the Giants, since O.J. Mayo just seems like the type of guy who would stupidly lose 100 grand betting on the Super Bowl. Also: When it comes to O.J. Mayo and gambling, we're reminded that Tony Allen is still totally awesome.

ONE MORE NOTE ON DAVID KAHN. Part of his job is being an effective manager of personalities. A boss, basically. And aside from all the questionable basketball decisions, this may be where he's really bad. Just look at this note from Jerry Zgoda at the Star Tribune:

David Kahn presented Love with a contract offer in the training room -- not sure if it was the only formal offer ever made or the latest -- after Monday's loss to Houston and that Love was seen leaving Target Center with it crumpled in his hand and visibly angry.

A good boss, even if you don't agree with him, commands enough respect so that someone like Love would at least hide his disgust. But Kahn honestly seems like the sort of bumbling, bureaucratic puppet that nobody really takes seriously. He talks like Lumbergh from Office Space, but in an NBA context, I'm pretty sure everyone looks at him as Milton.

FINALLY, FREE J.R. SMITH. You sorta had to see this coming after the story about J.R. Smith's sister brawling in the stands emerged a few weeks ago. Or maybe you saw this coming the second you heard J.R. Smith was going to spend a year in China. Either way, really.

But yes: J.R. is stuck over there, playing in an Industrial city called "Yiwu" that's famous for manufacturing 3 billion pairs of socks per year. J.R. doesn't sound very happy. In the CNN interview below, he talks about watching the NBA this year: "It's tough because I still get to watch the games, watch all my friends playin' against each other ... but at the same time I gotta live with the decisions I made."

Yikes. "I gotta live with the decisions I made" sounds like something you'd hear from a guy in prison, which probably isn't that far off. Smith wants to come back, but he can't, and when he got injured, Chinese officials accused him of faking it and forced him back on the court. "It's kind of taken away the love of the game," he says. "Basketball shouldn't be something you're forced to do. It should be something you love to do."

The funniest part of the interview comes when CNN interviews a Chinese fan about the foreign imports, and he says that the NBA players are good role models for their Chinese counterparts. And let's be honest: Even if the decision to go to China was a complete disaster, it's almost worth it just to imagine a generation of Chinese players patterning their game and demeanor after J.R. Smith.

"I take my hat off to a lotta guys that play in the NBA back home," he adds solemnly at the end. "It's always bout 1 or 2 foreign guys on the team. But now I'm a foreign guy, so the shoe's on the other foot a little bit." Uhh ... at least he's got plenty of socks though, right?