Share All sharing options for: PHOTO: Memphis Grizzlies Uniforms Are An Interesting Throwback

It's throwback night at Staples Center and Memphis probably should look forward instead of back. Both teams are wearing ABA uniforms, which is cool and all ... except the Grizzlies' are something else. Bright yellow/gold tops, green shorts, full-on assault of the senses: engaged.

The Clippers' uniforms aren't bad at all and are relatively tame by comparison. The baby blue -- at least I think it's baby blue, or something close -- and red seems to work and isn't a huge departure from the norm. The uniforms even have a neat little star pattern running down the sides. Not too shabby at all!

When you see the two uniforms next to each other, though, it's quite the contrast. 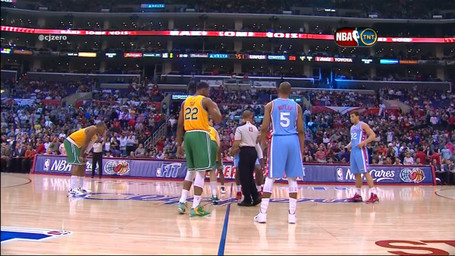 If I didn't know better, I'd think I tuned into a Harlem Globetrotters-Washington Generals game, with each team debuting twists on the classic uniforms. Now let us never speak of these Memphis throwbacks again.