The Portland Trail Blazers have shown off a new up-tempo style that has raised their profile in a deep Western Conference, but is it enough to give them a better chance at advancing out of the first round of the playoffs?

Last season, a Western Conference contender, sensing it needed to do something different to improve its fortunes in a deep conference, dramatically altered its style to the shock of most of its opponents. The end result was a standout regular season fueled by brilliant coaching and execution, but an early postseason exit once a team was able to lock in on that style.

That's the fate that the San Antonio Spurs suffered then. One year later, something similar is happening with another Western Conference contender, albeit one that hasn't experienced as much postseason success. From watching this team for four games, I worry a similar outcome might eventually befall them.

It's very early, but these aren't your same Portland Trail Blazers. Through four games, Nate McMillan's once-plodding group is second in the league in pace, averaging over 100 possessions per game. Before, they occasionally ran for layups off turnovers and pulled back when there was nothing there. Now, they are forcing the action even off missed shots. It's led the Blazers to a 3-1 start--with the lone loss coming in a tight one on the road against the Los Angeles Clippers--and it's made them more dangerous than ever.

What's changed? The biggest thing is that the Blazers seem to be taking advantage of Gerald Wallace's skills more than they did last year. Few NBA players have as unique a game as Wallace does. On the one hand, he's fourth among small forwards who play at least 25 minutes a game in total rebound percentage this year and seventh among that group in defensive rebound percentage. On the other hand, almost nobody scores more points in transition. In Portland's first three games, all wins, Wallace scored a whopping 52.5 percent of his points within the first 10 seconds of the shot clock.

It's pretty incredible to see a player who is able to grab so many defensive rebounds, yet runs the floor as well as Wallace does. Usually, players can do one, but not the other. Either they leak out and don't help their team on the glass, or they fight for rebounds and trot up the court because they're tired. Wallace finds a way to do both, thanks to his incredible basketball instincts.

Take this play from early in the Blazers' win over the Nuggets on Sunday. Wallace starts the play in the paint going for a rebound. 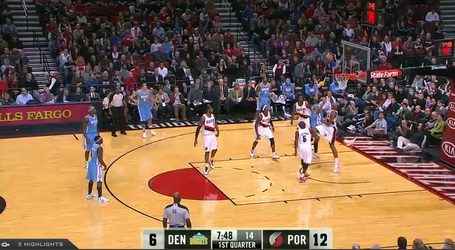 As you can see here, the Nuggets are well-positioned to stop the Blazers in transition. All five Blazers are in the paint, whereas two Nuggets are behind the top of the circle. But as soon as Raymond Felton grabs the ball, Wallace sprints to the left wing. 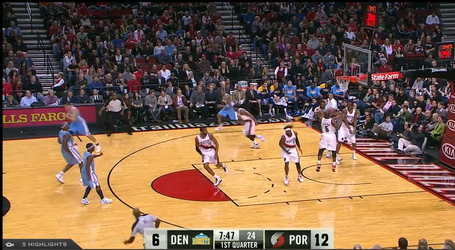 Felton pitches it ahead to Wallace, and he's now in stride going against Danilo Gallinari, who has to run crosscourt to meet Wallace. All it takes is one quick move, and Wallace has a layup. That's what happens when you can start on one side of the floor in the paint and sprint up the left wing the way Wallace can.

Wallace has always been able to do this, but this year, the Blazers are working extra hard to find him in stride. Last year, the Blazers only averaged just over 88 possessions per game in the 24 games after Wallace was acquired from Charlotte at the trade deadline. They didn't do a good job looking for him. This year, though, with the addition of Raymond Felton, the Blazers are trying to push the pace more to tailor to his strengths. Indeed, on this play, Wallace's diligence running the floor would have meant nothing if Felton didn't pitch it ahead to him.

That's all the good news. The problem: what happens when teams take this away? As good as Wallace is at running the floor, he can be stopped. The Clippers, in particular Caron Butler, paid special attention to dropping back and picking up Wallace as he ran the floor in their win on Sunday. The Blazers tried to get Wallace going in halfcourt sets, but because Wallace is a weak ball-handler and shooter, he struggled, putting up a goose egg in the point department.

That affected everyone else. With Wallace covered, Felton couldn't make the Clippers pay enough in transition on his own. In the half court, the Blazers' offense resembled the worst characteristics of its former self. They converted their jumpers at a good rate as usual, but struggled at the rim, hitting only seven of 19 shots. They took 22 free throws, which isn't awful, but nine of those were by Jamal Crawford, who had it going late. LaMarcus Aldridge was 0-4 at the rim and took just two free throws, demonstrating that while he's a superb player, he's not going to be able to carry an offense every night. It'll do in the regular season, but not in the playoffs, where the game's tempo inevitably slows down.

We're left then with a situation where Portland may be in a bit of a bind. Nobody knows his team's shortcomings more than Nate McMillan, and he deserves a ton of credit for recognizing that he needed to alter his style to tailor to his players. It takes a certain kind of coaching acumen to go away from what you find comfortable and give your roster its best chance of succeeding.

But even great coaching can only go so far. As good as Wallace is, his limitations as a half-court player hurt the Blazers' offense. Like so many teams, the Blazers lack a guy who can get to the free-throw line on his own when the fast break isn't there. The especially cruel thing is the Blazers had this guy--Brandon Roy--only to see his career end earlier than it ever should have.

For now, though, McMillan will do the best he can as always, and Wallace will show so many great athletes that mere athleticism is nothing without knowing how and when to run the floor.

For more on the Blazers, visit Blazers Edge.