LeBron James may be one of the most famous people on Earth, a 6'9 270+ freak of nature capable of doing things like hurdling another grown man, Chicago Bulls back-up point guard John Lucas III, for an alley-oop, but he can get frustrated with the morning commute like anyone else.

With most of the streets in downtime Miami shut down for the city's annual marathon Sunday morning, James chose to bike to work, riding 3-4 miles from his place to the American Airlines Arena, where the Heat defeated the Bulls 97-93.

Not only did he lower his carbon footprint, he did it while giving children a great example of someone not "too cool" to wear his helmet.

Picture after the jump: 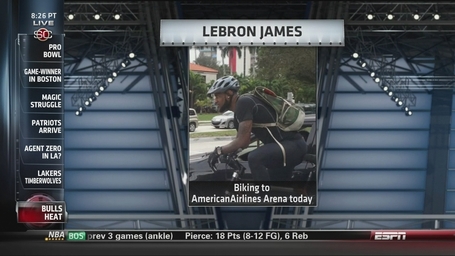 When asked whether he would ride his bike home, he told ESPN's Lisa Salters he hoped someone had washed his clothes during the game.

A salary of over $16 million comes with a few perks.