Quick Cuts is a weekly look at the best in NBA on Twitter. This week we have Movie Night with Marc Gasol, weather with Tony Allen, Al Thornton's Chinese travelogue and more. Submit your own by tweeting with the hashtag #quickcuts.

Andre Drummond's hashtag game is raw, but has potential.

Great team win today! We take it day by day an #BrickByBrick @detroitpistons

From the "Stars: they are just like us" department.

Two options for movie night at home: a.Prometheus b.The King's speech Which one would u watch? #kungfupanda2 it's the secret third option!

Remember Kendall Marshall's rookie backpack? Good. WHY IS HE WEARING IT AROUND TOWN INSTEAD OF JUST WHEN AT TEAM FUNCTIONS?

Starbucks cashier complimented me on my backpack, thank ya kindly.

(Kendall Marshall is the best.)

Danny Green reveals that blacklight bowling is still a thing.

Terrible bowling night for me...for some reason I can't bowl in the dark lol

And now, Tony Allen with your weather forecast.

Al Thornton has a few words of warning about attempting to drive in China.

Man these Chinese ppl don't give a damn how they drive!! No rules str8 up!! Whew

Only advice I can give ya when driving out here. Just don't get in a accident. Ppl walking in the middle of the freeway and riding mountain

When you thought DeMarcus Cousins couldn't get any more dominant in the paint ...

The bro @boogiecousins with a bow,Axe,metal cloves and a roman knife. He wasn't playing no games. Lol instagr.am/p/QlZM_jELem/ 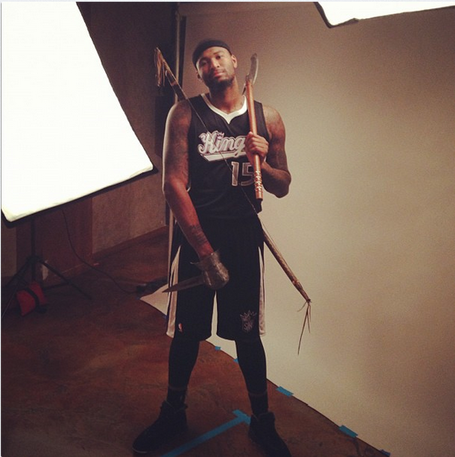 For a sec der..I thought d world had somethin better.den I got home..and they ran thru a burnin buildin 2 d mothership twitter.com/CharleeRedz13/…