NBA mascots are bizarre and possibly depraved. Here is your guide to all of the mascots in the Western Conference.

Now that all of the NBA teams have been previewed for the 2012-13 season, that's all she wrote, right? Time to just sit back and let the season begin, right? WRONG. Impossible to be more wrong. Have you forgotten about one of the very best parts of the NBA? That's right: it's the mascots.

Join us as we break down and rate every mascot in the Western Conference, including the three teams in the West that don't actually have mascots. 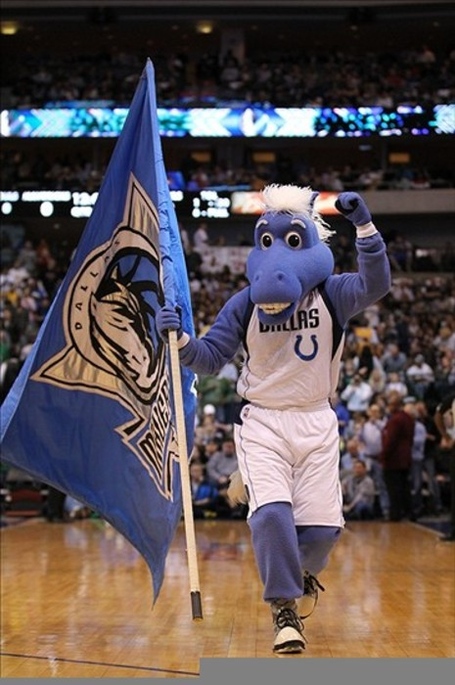 Strengths: Champ is the fellow with the flag that you see pictured above. Mavs Man, meanwhile, appears to be a man made out of basketball, or at the very least a man with basketballs for skin. It's possible Mavs Man may have been involved in some sort of freak accident that required extensive grafts, but he seems pretty happy about his current situation, so who are we to pity him?

In any case, the Mavs' mascots get points for looking like two of the most happy -- if not the happiest -- mascots in the entire NBA. They don't get points for much else. They'll need that happiness, the way the Mavs appear to be shaping up in 2012-13.

Weaknesses: Horses aren't actually blue. Basketball men don't even exist. If you already have an anthropomorphized horse, why would you ALSO need an anthropomorphized basketball? Seems like overkill at best. Also, the thing about both mascots being happy? Their visages could also be viewed as horrific, twisted rictus grins. No thanks to that. 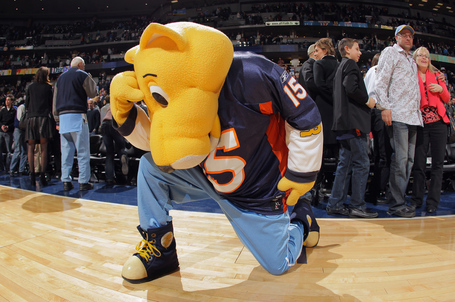 Strengths: The Warriors no longer have a mascot, because their previous mascot (a basketball player in a blackout muscle-suit with a weird Aldo Montoya-style face) was named Thunder. When the Seattle SuperSonics became the Oklahoma City Thunder, the NBA was like, "Yo that dude's gotta go. Can't have confusion in the marketplace." So since the Golden State Warriors are the Golden State Warriors, rather than like ... I dunno, just change Thunder's name, they canned him. Sorry, Thunder!

But there is a small silver lining to all of this. Getting rid of Thunder moves them one step away from reminding people of Mavs Man. No one wants to be reminded of Mavs Man.

Weaknesses: They should probably still have a mascot, as Thunder was awesome. Spoiler: The Thunder didn't name their mascot "Thunder." The final insult. 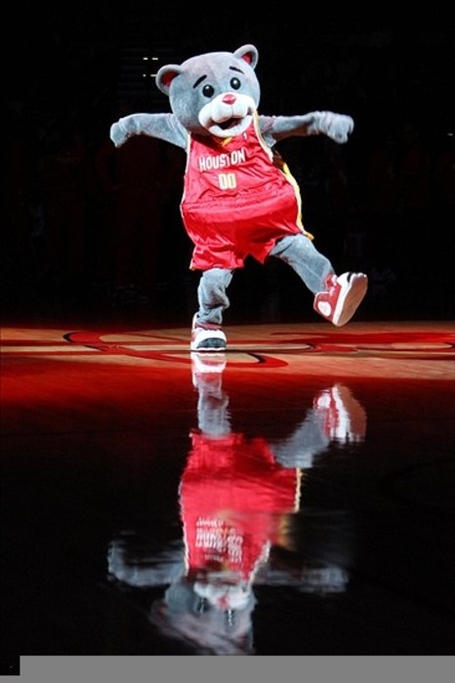 Strengths: This mascot, perhaps more than any other NBA mascot (perhaps even moreso than your average mascot, which -- think about that), is not afraid of showing ass. Sure, he'll go around blasting people in the face with sheet cakes, but he's also perfectly willing to get kicked in the nads by little girls during musical chairs, will continually be bested by children and generally be the butt of the joke more often than not. He also has a propensity for getting totally nude at the drop of a hat.

Weaknesses: Let's be honest: Clutch is probably one of the dumbest-looking mascots in sports. Dude has his jersey tucked into his sextuple-XL yimpers. Whereas most NBA mascots (more than most other sports) are fixated on how they can make their mascot look as badass or "cool" as possible, the Rockets just went with "big fat dumb teddy bear."

Strengths: I guess we can all be thankful that there's not some sort of foam-headed approximation of Blake Griffin, a la this horrifying Randy Johnson abomination.

Weaknesses: Not only do the Clippers NOT have a mascot, but the closest thing they had to a mascot, super-fan Clipper Darrell, was sued by the team last season and ordered to stop using the team name and logo.

Strengths: Unlike the Clippers, who are just too inept/lazy to create and pay a foam-covered hijinks magnet, the Lakers (try) to play the Yankees card of "We're too important and too steeped in tradition for a dumb stupid mascot." Also, there's no way that Kobe would ever put up with that sort of nonsense.

Weaknesses: This is more or less a tacit admission that the Lakers hate fun. I say they should make this guy their mascot. It would be pretty appropriate.

Strengths: Dude is just BUSTING out of that UnderArmor shirt. Check out how swole he is! He kinda looks like a cocky Paddington Bear.

Weaknesses: But he mostly just looks like a big, confused, dumb dog. 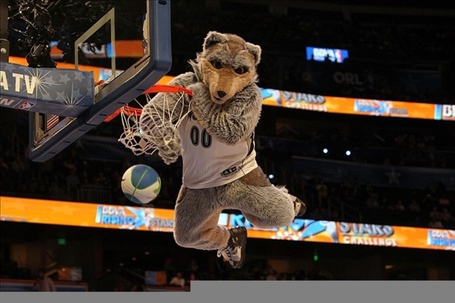 Strengths: Crunch is one of the mascots who can make us thankful that, in the year 2012, there is still something super awesome about a guy in a big dumb costume jumping through a flaming hoop to dunk a basketball. God bless you, showmanship.

Weaknesses: Regardless of how you feel about furries, there is likely no one who draws more ridicule on the subject than professional mascots. But of all the teams and all the mascots and all the fursuits, there is none that must scream "come-hither" than Crunch. I doubt that the designers of the suit were really setting "MAKE HIM SEXY" as one of the bullet points, but I mean, come on. As far as mascots go, Crunch is the carefully-manicured pinup. [NOTE: this is also a strength.] 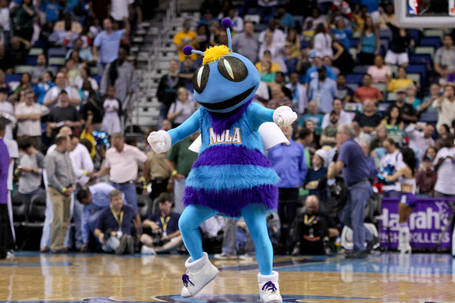 Strengths: One of the most resilient mascots, as he survived the relocation from Charlotte to New Orleans far better than the rest of the team. He might be the most watchable thing about the Hornets this season. For teams like the Hornets and other basement-dwellers, the NBA might want to consider offering a Mascot-Cam during games. I know that alone would make the NBA League Pass subscription 100% worth it. 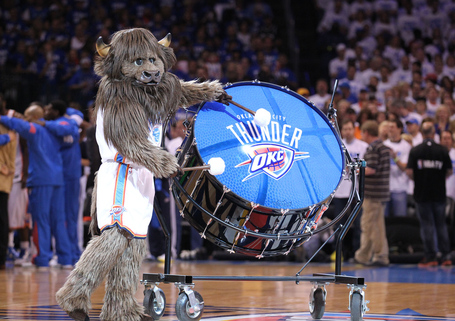 Type: Harry and the Hendersons-looking bison

Strengths: Doesn't want to work; just wants to bang on the drum all day.

Weaknesses: Put Thunder out of a job, then wasn't named Thunder. What an a-hole. Also, straddles the line between Where the Wild Things Are and a sasquatch much more than he resembles a bison, thereby causing confusion among impressionable Midwesterners.

One lone bison stayed behind as he helped each of his friends escape down a treacherous ravine...once all of his friends were safe he began his descent only to find his way blocked by fallen boulders.

Lost, he climbed to the tallest peak; left to face the storm alone and searching for a way down the mountain, he was struck by a bolt of lightning.

The bolt did not destroy him, but, by the power of the god of thunder, changed him. Suddenly, he walked on two legs like a man. He possessed amazing strength and agility - he could jump higher, run faster, think more clearly than any beast. 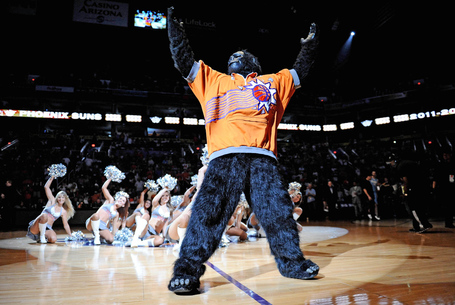 Type: Some sort of basketball-enthusiast monkey

Strengths: Possibly the most well-known mascot in the NBA, even if he's sometimes entering "San Diego Chicken" territory as people will go, "OH, THE SUNS GORILLA," but will completely forget that the Phoenix Suns are a basketball team that exists. That's fine, though. That's normal. The Suns are more like a state of mind, man.

Weaknesses: Other than being associated with the Suns, there's pretty much no downside to Go. 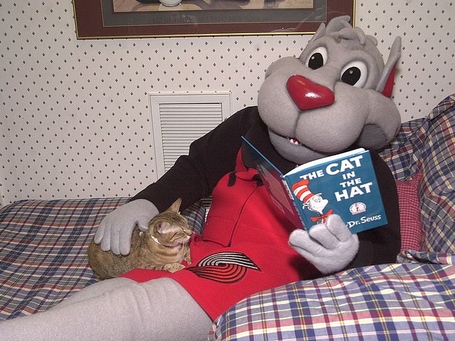 Weaknesses: Okay, "Blaze the Trail Cat." I get it. Blaze the trail. Trail Blazers. There's no such thing as a "trail cat." Unless you're referring to a specific model of snowmobiles, apparently. Discounting his dumb name, dude BARELY even looks like a cat. He looks like a ripoff of Crash Bandicoot where the character is a coyote. I do find the above picture adorable, but yeesh. 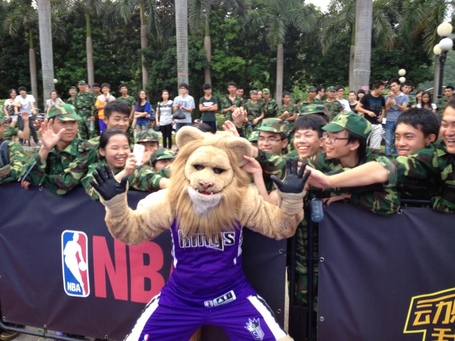 Weaknesses: Dear sweet god, this is the most horrifying NBA mascot I've ever seen. It's like a Spitting Image puppet of Ron Perlman from Beauty & the Beast. All the people who are angry at the Maloofs for their mishandling of the team? This is what you should really be angry at. Slamson is an abomination and an affront to our cultural parameters of decency. 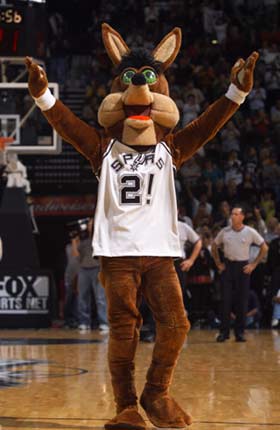 Type: A coyote, believe it or not

Strengths: Is the most exciting thing about the Spurs, ever. Looks like a strung-out hobo who wandered onto the court and acted like he belonged there, so they gave him a job throwing confetti at people or whatever. You know; the American Dream.

Weaknesses: Appears wholly incapable of putting on pants. Donald Duck may have been able to get away with that in a simpler time, buddy, but let's live in 2012 and get you a pair of board shorts or something. Indecent at best. 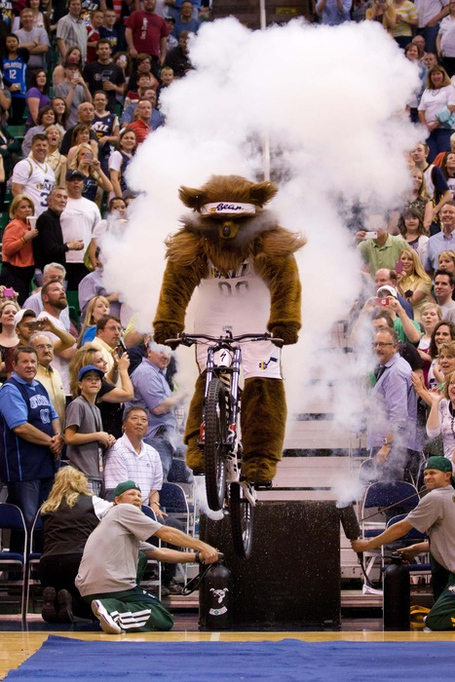 Strengths: The Jazz Bear is easily the most insane mascot in the NBA and shows the least regard for his own well-being. This is awesome. He is everything you wish a mascot could be and more. He slides down flights of stairs, leaps dirt bikes over things and plays a piano so hard THAT THE PIANO EXPLODES. I'm surprised he doesn't come to the arena floor firing actual guns into the air. The disparity between how awesome the Jazz Bear is and how moribund the actual Utah Jazz are that it absolutely boggles the mind.

Weaknesses: Since he is the mascot of the Jazz, very few people will get to see and appreciate his genius.