The Brooklyn Nets' defense has issues, and the Los Angeles Lakers have issues in general. That and more in Monday's NBA scores roundup.

The Brooklyn Nets have now lost four in a row, the last three of which were at home against good teams that they nevertheless should compete with and beat. Sure, Brook Lopez has been hurt, but the Nets' problem recently is defense, which has historically not been Lopez's strength. They gave up 117 points to the Oklahoma City Thunder, 109 to the Golden State Warriors and 75 in three quarters to the Milwaukee Bucks before clamping down a bit in the fourth quarter.

In this game specifically, the Nets' problem was obvious. If you want to defeat the Bucks, you have to contain Brandon Jennings and Monta Ellis in pick and roll. Keep them to the perimeter, and they will fire up errant shots. Let them turn the corner and get into the paint, and they will do a lot of damage. The Nets' healthy big men consistently let Ellis and Jennings get past them in their pick-and-roll coverages, which opened up so many avenues for the Bucks to score. In a couple cases, they even stuck to cold-shooting Ersan Ilyasova, practically ushering Ellis and Jennings to the basket.

We'll provide one example from each of the Nets' bigs. First, Reggie Evans. On this play, Jennings and Ilyasova run a high pick and roll going to Jennings' strong hand. Notice what Evans does in these screenshots. 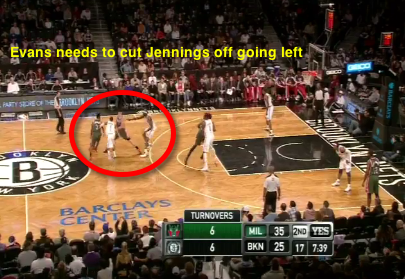 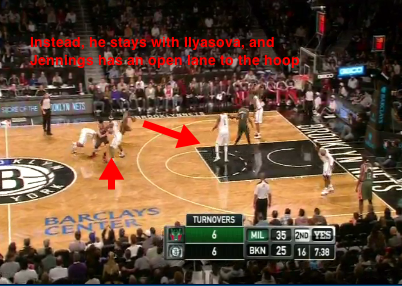 It's not really clear why Evans thinks the right play is to stay with Ilyasova. Perhaps he thinks C.J. Watson is closer to fighting over Ilyasova's screen than he is. Perhaps he has forgotten that Ilyasova is shooting 39 percent from the field and 26 percent from three-point range. In any event, Jennings gets a wide-open lane to eventually shoot a floater, and the Nets' defense is compromised. 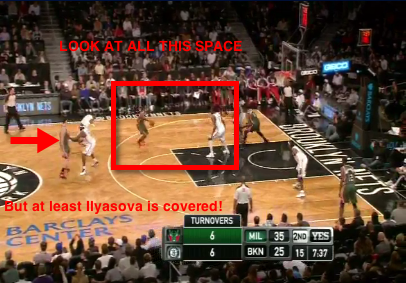 Next, let's talk about Kris Humphries. Humphries lost his starting spot for this game, presumably because of mistakes like this one. Watch how he too stays with Ilyasova instead of cutting off Jennings' path to the basket. 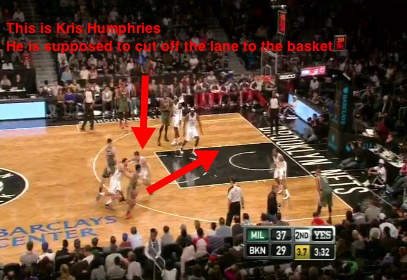 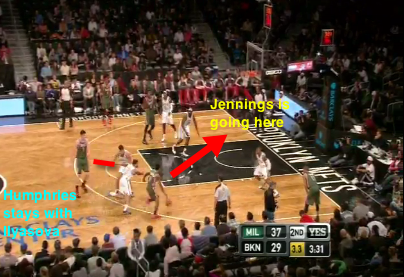 Jennings hit an awkward runner on this shot, but he can do that. The issue is that he was even able to break down the defense in the first place.

Finally, we must bash Andray Blatche. Blatche has been a revelation for the Nets this season given his price tag, but this play where he let Marquis Daniels of all people dribble down the lane for a layup was inexcusable. 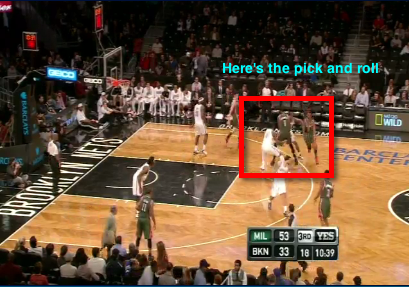 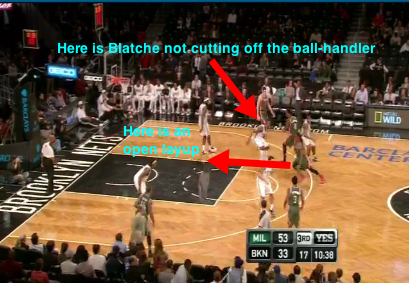 I'm not quite sure what Blatche was thinking here, but Daniels should not be shooting any layups at this point in his career.

The breakdowns were so rampant that you almost wonder if coach Avery Johnson instructed his big men to defend the pick and roll this way for some reason. I doubt that, considering Johnson's defensive pedigree, but you never know.

The more likely scenario is that the Nets' big men are very bad pick-and-roll defenders, and that must change if the Nets are to compete in the Eastern Conference.

TomZilla has a whole post on the Lakers' lagging defense, so I won't steal his thunder. I will instead just point out this one transition defense sequence in the very first minute of the game. Take a guess as to which of the three Lakers players in front of Mo Williams prevented him from getting to the basket. 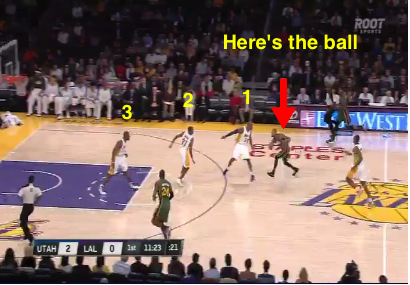 If you guessed none, you are correct. This is in the first minute of the game, mind you.

This was a fantastic game. The Nuggets are so close to breaking through, but they keep falling just short down the stretch. This game featured yet another mind-boggling Ty Lawson turnover in the final minute to seal their fate. Meanwhile, the Knicks squeezed just enough out of isolating Carmelo Anthony in tough situations to hang on for the win.

The key stretch, though, was at the beginning of the fourth quarter. Thanks to some great transition play, the Nuggets held an eight-point lead. Over the next few minutes, JaVale McGee did the following things.

There were other reasons the Knicks went on a 12-0 run there to take a four-point lead, but in case you were wondering why George Karl is reluctant to give McGee more minutes, that stretch explains it.
Thunder 104, Pacers 93
The Pacers hung around for most of the game, but that was before Kevin Durant and Russell Westbrook woke up from their slumbers. The two stars combined for 16 of the Thunder's 20 fourth-quarter points, and the Pacers just didn't have enough firepower without Danny Granger to keep up.
It's getting scary how good the Thunder are despite trading James Harden. Kevin Martin came in late in the first quarter and scored 15 points in the blink of an eye. He was supposed to be worse for the team than Harden. Durant and Westbrook were supposed to have plateaued by now. They've hit another level. Serge Ibaka has grown faster than expected, and Kendrick Perkins has a pulse. This team is arguably the best in the league right now. Who would have thought it?
Clippers 102, Raptors 83
The score of this game at the nine-minute mark of the fourth quarter was 81-79 in favor of the Clippers. From there, Los Angeles scored 21 of the game's last 25 points. #Pray4Raptorsfans
Magic 98, Suns 90
The Magic beat the Lakers, Warriors and Suns on this long West Coast road trip. Not bad. Not bad at all. Also not bad at all: rookie Andrew Nicholson. The 19th pick in the 2012 NBA Draft had 19 points and nine rebounds on 11 shots in the win. More and more, it looks like Rob Hennigan was right to deal Dwight Howard for the kind of package he did over the summer.