The long battles over the worth of Carmelo Anthony are dissipating. There's no question right now that he's one of the league's brightest stars. He showed it in the Knicks' win over the Nets on Wednesday.

Share All sharing options for: Carmelo Anthony puts on an MVP performance

NEW YORK -- The question was posed as a hypothetical because at that moment only those in the Knicks' locker room knew the answer and they weren't saying one way or the other, but Avery Johnson knew.

"Oh, he's playing," the Nets coach responded to the "will Melo or won't Melo" query.

Tyson Chandler also had a feeling. When he saw Carmelo Anthony that morning, he sensed that familiar "game-day excitement," as he put it. "It made for some good anticipation and drama."

Eventually Mike Woodson knew when the team's medical staff said that Anthony would be a go after missing the last two games and five days of activity with a sprained ankle. "Doc came in and told me he was going to play after I met with you guys and I was very excited," Woodson said with a hint of a smile on his face. Woodson rarely smiles.

Anthony scored 31 points on 22 shots and the Knicks enjoyed a satisfying 100-86 win over the Nets that provided about as much spark as a typical mid-December game against anybody else on the NBA schedule, let alone the team on the other side of the river.

The rivalry, as it were, was noticeably absent inside Madison Square Garden. This was not like the earlier two games in Brooklyn with the fans split down the middle, hanging on every shot. The Nets may be reborn in Brooklyn, but in Manhattan they are as they always were. They had a handful of fans who blended into the blue and orange crowd like so many Jazz or Hawk partisans. It was a shame, too, because the first half was every bit as good as those previous two games but, without that buzz from the crowd, Wednesday night at the Garden was like any other night.

Melo, good sport that he is, indulged the rivalry question better than most.

But this wasn't about Knicks-Nets and the battle for New York that has so captivated everyone up to this point. This was about Carmelo. After it was over, Woodson laid it down for everyone.

"There's no doubt in my mind he's an MVP candidate," Woodson said. "I know it's early, but he's playing at such a high level it's scary. It's a beautiful thing to watch. He's making everyone around him better and the results are wins. That's what's it all about at the end of the day." 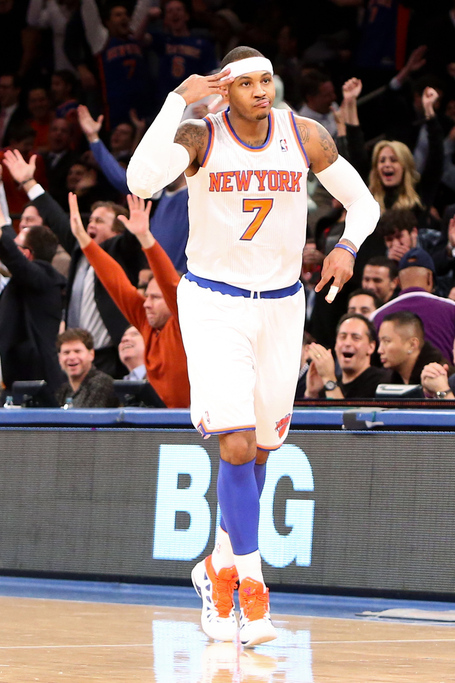 All in all, this is a fairly remarkable turn of events. There are those of us who have long felt that Anthony -- as undeniably gifted a scorer as he is -- is inherently overrated as a superstar mainly because that one undeniable gift -- scoring -- has come at the expense of other things and has not yielded the proper results in the standings.

But this is different. He's second in the league in scoring and third in PER. Since moving to the four, he is a matchup nightmare and is killing it from behind the three-point arc where he's making better than 45 percent of his attempts. More specifically, on a team of players who operate in peaceful harmony around the things Melo does, as opposed to in spite of the things he does, he has become the true franchise player for a team that is 19-6 and sitting atop its division six full games ahead of the Celtics and Nets. They are clearly the second-best team in the East and an obvious headache for the Heat.

Sure, there are still the occasional jab-step ISO step-back jumpers in his game, but as a catch-and-shoot threat on the wing he is every bit as pure as Kevin Durant. In the open floor he is a talented finisher. If you were new to the game and simply watching it unfold with little regard to shot charts or advanced metrics, you'd be left with one undeniable thought: Man, that guy is freaking good. No one has ever denied this.

What was instructive Wednesday night was that when Melo wasn't scoring, Chandler was rolling to the rim for his trademark alley-oop dunks. You would think the Nets would have adjusted at some point, but by midway through the third quarter it was so obvious what was about to happen that the Garden crowd began to anticipate the inevitable slam before Chandler even arrived to set the screen. The action didn't involve Melo, but at the same time everything involves Melo because his mere presence ensures space for the pick and roll to operate.

Chandler, who is every bit as vital in his own way, was his usual disruptive self, clogging up the lane, rebounding like mad and back-tapping those he couldn't grab. But like everyone else, he was just as happy to talk about Carmelo.

"He is a special player," Chandler said. "There are not many in the world who can take four or five days off and then put up 31 points."

These were the Knicks who started the season. Melo and Chandler played like stars in their respective areas of the court and the good J.R. Smith reappeared to chip in with an efficient 19 points on 11 shots. Jason Kidd did his usual number and the other role players provided support where needed. The defense was solid throughout, which has been a particular concern lately.

"How we came out of camp," Woodson said, "is how we played tonight."

The Nets ... well, the Nets have problems. As noted yesterday, they go beyond Deron Williams' frustrations with the offense. The game was played at their pace, just 83 actual possessions per NBA.com's John Schuhmann, who tracks these things diligently. Eighty-six points on 83 possessions isn't great, but it's not terrible either. One hundred points, on the other hand, that's a problem.

"We are frustrated," Williams said. "We have to change some things. We have to get better. It's on us as players."

There is some delicious irony here because in the winter of 2011 the Nets' acquisition of Williams was seen as a bold counter-strike to the Knicks' drawn-out pursuit of Anthony. Where the Knicks were seen as giving away too much for Anthony, the Nets looked prescient in dealing away the raw Derrick Favors and draft picks for Williams.

How do those deals look almost two years later? The Nets are capped out and hamstrung with what looks like a .500 team and a point guard openly critical of the team's offense. The Knicks are an undeniable surprise -- even their most partisan supporters couldn't have seen this coming.

Much of this is due to Chandler's immense defensive presence inside and selfless nature on offense. Some of it can be attributed to the wondrous Kidd as well as Woodson's coaching. That's the thing with really good teams. It's rarely one player or one thing that makes them complete.

But like all good teams, the Knicks have a fulcrum and it's Anthony. He is, at 28 years old, a legitimate MVP candidate and performances like his on Wednesday are the stuff of narrative. For once we can truly say that it's not the narrative that's driving Anthony's season, it's his play.