Jeremy Lin Has Made History: A Statistical Breakdown

Since 1985, only 15 players have scored at least 20 points, seven assists and a steal for six games in a row. That list includes Michael Jordan, Magic Johnson, LeBron James, Chris Paul ... and Jeremy Lin.

Share All sharing options for: Jeremy Lin Has Made History: A Statistical Breakdown

Jeremy Lin changed things up a little on Wednesday night. During the sixth start of his career, which also happened to be the Knicks' seventh consecutive win, he took six shots from the field, only one-fourth as many as he took two games ago. For one night, at least, he found utility as a pass-first point guard, and managed to chalk up 13 assists in only 26 minutes on the floor.

The Knicks won comfortably, but a streak has ended. Lin managed to record at least 20 points, seven assists, and one steal in each of his first five starts. He is one of only 15 players to do that since the 1985-86 season.

I'm not talking about "players in the first six starts of their career," or, "players in their rookie season." Lin is one of 15 players of any type to do that at any point in the regular season over the last quarter-century, period: 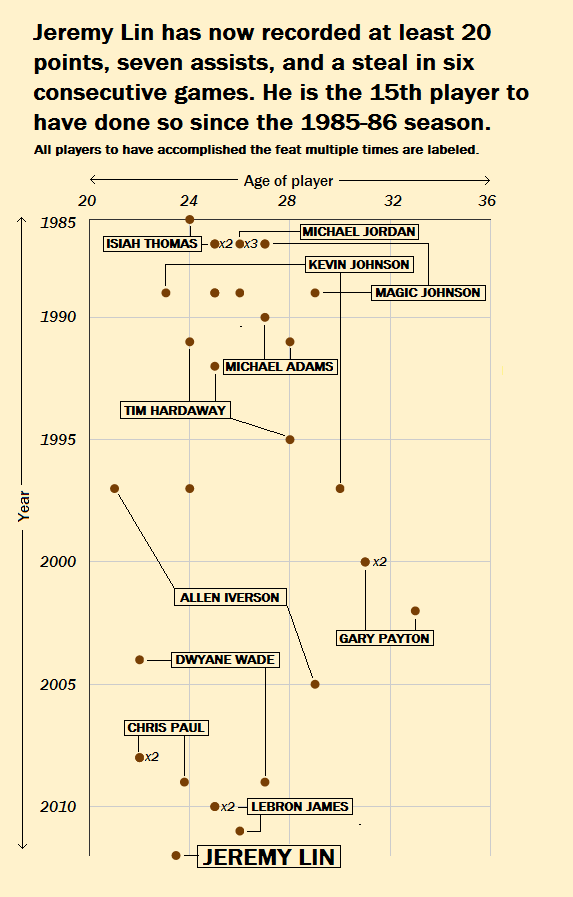 Obviously, nobody talks about 20, seven and one as some sort of statistical Holy Grail. But I think we're on to something here, because the company he joins in this regard isn't a smattering of random names: Allen Iverson, Alvin Robertson, Chris Paul, Dwyane Wade, Fat Lever, Gary Payton, Grant Hill, Isiah Thomas, Kevin Johnson, LeBron James, Magic Johnson, Michael Adams, Michael Jordan and Tim Hardaway

This feat has been accomplished a total of 33 times by these 15 players. Almost all of the players I listed above are superstars. The rest at least had a few good seasons under their belt. And at this point, you probably don't need it pointed out to you that everyone mentioned except for Lin was, you know, drafted.

Lin is drawing interest for plenty of different reasons: he's Asian, he went to Harvard, he hits game-winning shots, he went up against Kobe and came out ahead, he slept on a couch. Et cetera. It would be tempting for the casual observer to guess that his accomplishments are being overblown. They aren't.

That said: Stacked up against the other players who have had a streak like Lin's, his numbers are a little abnormal. Let's take a look at what he's doing relatively well, and what he could stand to work on, by comparing his streak with the 32 others like it:

GOOD: He's getting to the line. 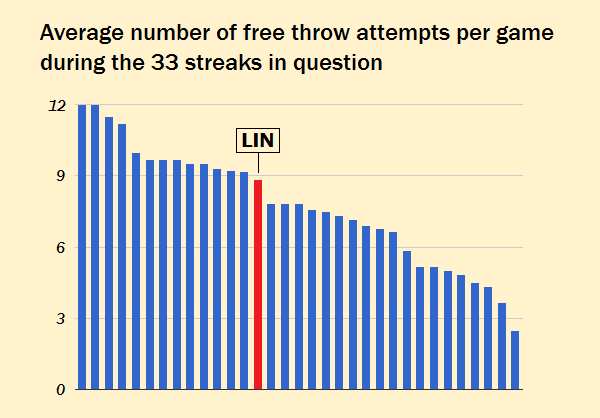 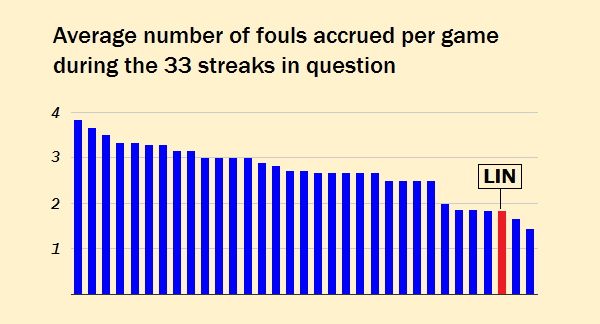 In order to piece together streaks like Lin's, most other players had to play in a manner that led to more fouls. During Tuesday night's win over the Raptors, meanwhile, Lin didn't get hit with a single foul. 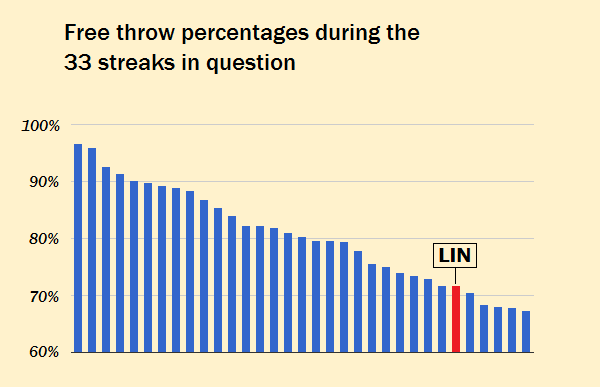 Lin is making just over 70 percent of his free throws. In fairness to him, that's about the league average, but that average is weighed down by plenty of guys whose trade isn't shooting. I know that a good mid-range scoring ability doesn't necessarily translate to effectiveness at the line, and in fact, Lin only shot 73.3 percent from the line at Harvard.

But given his ability to get to the line in the first place, it's too bad that he hasn't been able to knock down a few more than he has.

Bad: Turnovers. Far too many turnovers. 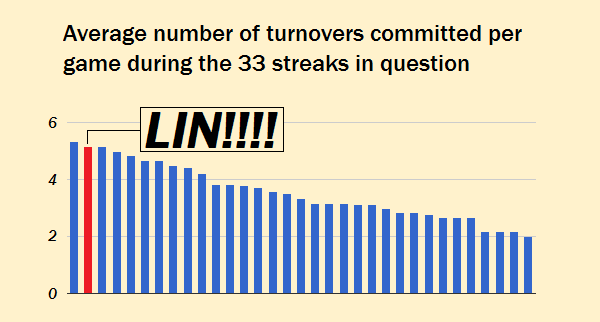 Over the six-game streak, Lin averaged five turnovers per game. In two games he lost the ball eight times and in two others he gave it away six times.

He's a young point guard who is being heavily relied on to create scores, so this turnover rate is understandable to a point. But this is a weak spot, and if weak spots are left unaddressed for too long, they'll be exploited. On Wednesday night he committed another six turnovers, and he did so despite going to the net far less often than he usually does.

If you'd rather overlook his flaws entirely, I can't really blame you. The Knicks, once 8-15, are now 15-15. And in a league that produces fun stories and personalities with regularity, Lin's adventures have been some of the most fun, surprising, interesting and exciting the NBA has seen in years.

Data for this piece was researched via Basketball-Reference's always-awesome Play Index.