Rising Stars Challenge: Who Should Be First (And Last) Youngster Picked?

Shaq and Charles Barkley will choose their teams for the Rising Stars Challenge on Thursday. As a preview exercise, SBNation.com's Andrew Sharp and Mike Prada assumed the GM roles. The draft pool proved shallow.

Share All sharing options for: Rising Stars Challenge: Who Should Be First (And Last) Youngster Picked?

On Thursday, Shaq and Charles Barkley will assume their roles as general managers of the two Rising Stars Challenge teams that will face off on All-Star Friday. The game, formerly known as the Rookie Challenge, where the best rookies competed against the best second-year players, will now feature mixed teams culled from a pool of 18 rookies and sophomores.

Before Shaq and Chuck make their picks, our own double-headed dragon -- Andrew Sharp and Mike Prada -- will mock up the Rising Stars draft. Sharp's up first with the No. 1 pick.

Sharp: Is Blake Griffin playing? He's not, right? Either way I'm taking Rubio, one of the only players who you watch every night and say, "Good God, can you imagine him in the All-Star Game?" This isn't quite that, but it's close enough, and I'd like to have him throwing stupidly perfect lobs and no-look passes to my players all night long.

One year I hope Nike does a commercial with Ricky and Kevin Love where Ricky asks Kevin if he wants to play Around the World. Next frame you Rubio throwing a behind the back pass like, around the Eiffel Tower. Then an alley-oop to Kevin Love across the Grand Canyon. Then he throws it off the worlds tallest building in in Dubai, and it bounces to Kevin Love who dunks it in the middle of the Dubai Fountain. Or a bounce pass that goes over the Sydney Opera to Kevin Love, who dunks it on the other side. And then the camera pans to Rubio who smiles and says in his Spanish accent, "That's how you play Around The World." That's a free idea, Nike.

But yeah, Ricky Rubio's definitely the No. 1 pick here.

Prada: Blake Griffin, because he's playing. That's all I need to say.

Sharp: John Wall. Fine, you can have Griffin. I'm taking his running mate from last year's game -- remember Wall's 22 assists? And the bounce pass alley oop? It's true that Wall's been pretty mediocre for most of the year, but A) He's gotten better the past month or so, and B) what he's trying to do in DC is like watching someone try to preach to an insane asylum. Next to everyone else in an insane asylum, the guy trying to preach looks just as batshit as anybody else.

Point is, he's been inconsistent and might be a little overrated at this point, but we should cut him slack, at least until he plays on a team that isn't terminally poisoned. Besides, we're taking him here as a counter-measure. Team Prada can have Blake, but we're taking away the best fast break weapon in the game. The shit's chess, it ain't checkers!

Ziller: That's right, Sharp now has two point guards, neither of whom can shoot at this point. They can throw lobs to the big men left over when Prada's done, so... uh, Markieff Morris! Sweet. Blog David Kahn coming at ya.

Prada: Let Sharp have the fun team, but I'll try to win the game. Given that most players will probably play harder knowing they may have been slighted by the two GMs, I think it's reasonable to think this won't just be an exhibition.

Ziller: Oh no! Now the door is open for Sharp to actually get a big man by drafting ...

Sharp: He's been awesome since New Year's, and even if he's still not quite dominant in the regular, he's still perfect for the Summer League/All-Star brand of disorganized, uber-athletic hoops.

Ziller: And because he wasn't taken until No. 5, he's guaranteed to drop 30 on Team Prada.

Prada: Reluctantly, I'll take Greg Monroe simply because he's so much better than any of the remaining choices. But this isn't the kind of game for him. Oh well. Have I mentioned yet what an insane season Monroe is having?

The comments from that video:

Ziller: Alright, we're already down to "players who probably didn't deserve to be picked." Who's got Markieff?

Just to be sure.

A sign I may be taking this game too seriously: here's my starting lineup.

I've got shooting, defense and a really good distribution of usage on the court. If my team was playing a real game, it'd be awesome. Sadly, this isn't a real game.

Sharp: He's shooting 48% from the field and my two-headed point guard monster will get him all kinds of open looks. LOOK OUT, Y'ALL.

Prada: Nobody watches the Nets, but Brooks has actually been pretty awesome this year. He'll have a great 10-year career as the new small guard, sixth-man type.

Sharp: Because picking Evan Turner for defense is beside the point. And mostly because we needed an excuse to remember Kawhi for his draft day ensemble. 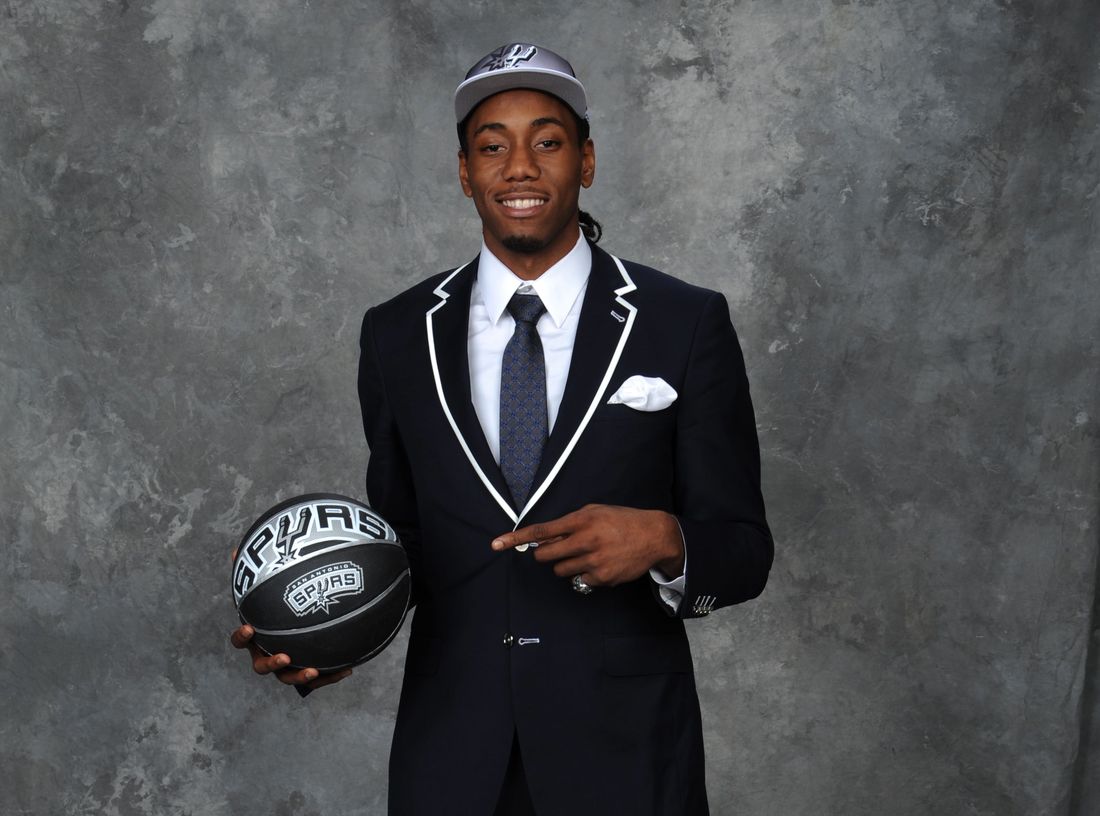 Prada: Yeah, I'll take Evan Turner at No. 14. Turner's subtly improved this year for a good team, which is more than you can say about all the other guys left.

Sharp: He's the reason @CardboardGerald hasn't committed suicide yet. Also, earlier this year I watched him to take what had to be 40 shots against the Wizards, so at least we know he'll be aggressive. Also, I had no idea the last two drafts were this awful.

Prada: He's well on his way to being a poor man's Jrue Holiday.

Ziller: We're down to Tristan Thompson and Tiago Splitter ... this could be devastating for one of these young men!

Sharp: Six points and five rebounds a game. LeBron Who?!

And now, a look at the final rosters. First up:

The biggest problem with my team is that I actually built a basketball team. In a real game, my squad would have a devastating pick and roll duo, a big man to clean up the misses and set good screens and two great shooters on the wings that are also strong defensive players. I'd also have the capability of going small, have instant offense off the bench in Brooks and a backup point guard in Knight who can play off the ball. It's going to be impossible to stop my team, and I think we could shut you down defensively too.

Alas, this isn't a real game. Still, I'll take my chances against the Wall/Rubio backcourt.

I'm feeling good about the way all this went down. My team is an absolute disaster if they ever played a season together, but they are PERFECT for an All-Star Game. Wall and Rubio would be murderous together, and DMC is a lock to drop 30 again, especially since Blake will sleepwalk through 15 minutes before hanging out on the bench and texting actual All-Stars to make plans for later that night.

But yeah, if nothing else, going up and down these rosters just makes you appreciate how rare true superstars really are. Any draft has one or two at best, and sometimes not even that much.

The two best players in the "rookie-sophomore" game were drafted in 2008 and 2009, and beyond that, there are only four guys (Wall, Cousins, Irving, Williams) with a realistic chance at ever making the real All-Star Game, let alone starting. The good news: A ridiculous amount of help is on the way in June. So... This game can't possibly be this depressing next year! 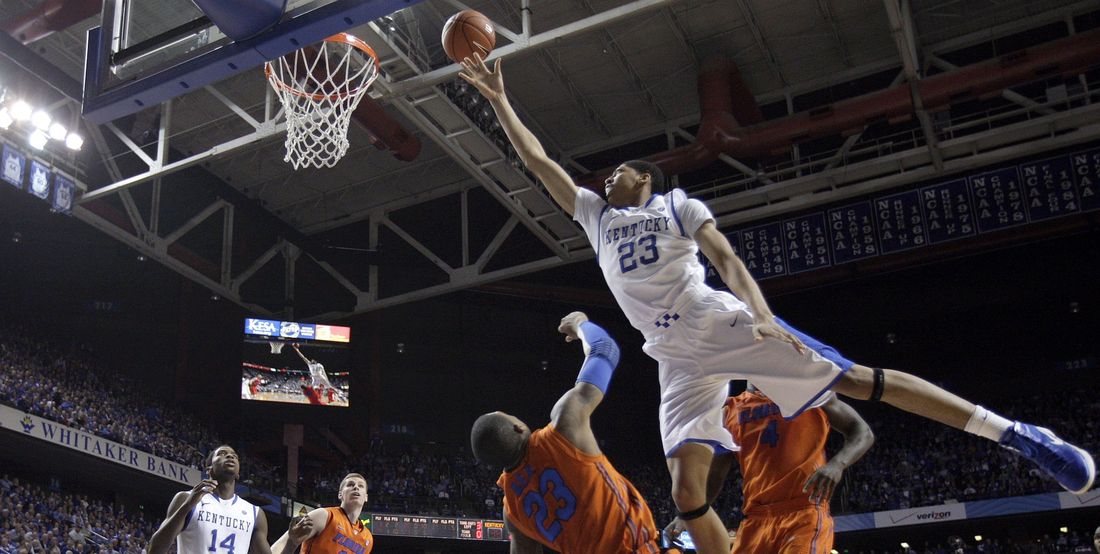