The Worst Airballed Free Throws In The History Of Civilization, Numbers 19 Through 14

The airballed free throw is the most shameful, profound action of failure that exists in any sport. And yet, nobody has attempted to keep stats on them ... until now. Here are all the airballs from the stripe we found, complete with video evidence.

Share All sharing options for: The Worst Airballed Free Throws In The History Of Civilization, Numbers 19 Through 14

Date: April 5th, 2009
Game situation: Up by two, 6:12 remaining in 1st
Career free throw percentage: 52.7 (22.1 percent worse than league average)
Missed rim by (visual estimate): Three inches
Other notes: You probably could have guessed that this won't be Shaq's only appearance in this list. His career .527 free throw percentage isn't the very worst of all time, but considering he led the league in free throw attempts six times ... actually, yeah, he's the worst.

And the thing about his shot mechanics is that they look like they were specifically designed to just bang off the front of the rim and, if nothing else, prevent him from showing up on this list. Welp!

Date: December 21st, 2011
Game situation: Preseason game
Career free throw percentage: 74.5 (0.3 percent worse than league average)
Missed rim by (visual estimate): Five inches
Reaction from ... somebody: "SHORT!"
Other notes: Let me know if I'm wrong on this, but: a player yelling "SHORT!" at an airballed free throw that, by rule, is dead anyway, is the most preseason thing that has ever happened.

Other notes: This was Jan Vesely's first-ever NBA free throw attempt. In fairness to Vesely, who hails from the Czech Republic, it takes some time to really grasp the differences in nuance between American sports. If baseball umpires were calling this game, they so would have given him the point. The MLB rulebook uses the phrase "close enough" 68 times and "whatever" 51 times, and includes the passage, "if the shortstop doesn't touch second on the double play, just call it a double play anyway because baseball does not matter."

(Via Trey Kerby, video via @cjzero) 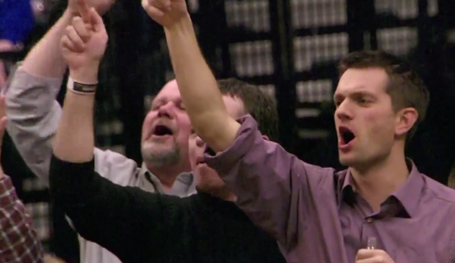 Other notes: It's been five years since the Timberwolves finished a season with a winning percentage above .300, which basically made them the worst team in major professional sports. They're doing better this year, but my point is that when your team is really bad for long enough, you stop rooting for people. You instead start rooting for weird or interesting things to happen.

Basketball is a sport full of little Easter eggs that only happen once in a while -- the four-point play, the half-court heave that falls in, the center pulling up for three, et cetera. It's a beautiful sport, whether you don't have a favorite team, or just wish you didn't.

Date: March 10th, 2010
Game situation: Down by five, 3:24 remaining in 2nd
Career free throw percentage: 58.5 (16.3 percent worse than league average)
First attempt missed rim by (visual estimate): Two inches
Second attempt missed rim by (visual estimate): Three inches
Reaction from the booth: "Have you ever seen that in the NBA?" "I have not. At least if you airball the first one, you make sure you draw iron on the second one. You basically throw it at the glass and make sure you draw iron."
Immediate visual reaction: 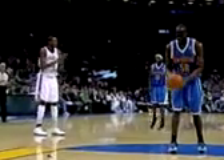 - Is he ... Kevin Durant's clapping Okafor on, right? Solid dude.

- I really love the phrase, "draw iron." Beyond the fact that it was used centuries ago to refer to drawing a sword or gun, that phrase is used exclusively in the inverse: "he didn't draw iron." No one ever says, "he drew iron! Neat!"

- As far as I've been able to find, this video is the only documentation of the incident on YouTube. Usually there are plenty of others, but nobody is in a hurry to be like "f*** Emeka Okafor," not even on the Internet. Actually, back to that screencap above: are Durant and Okafor the two most likable dudes in the NBA?