LeBron James Owns The All-Star Game Even When He Loses

Kevin Durant won MVP and the Western Conference won the All-Star Game, but it was LeBron James who stole the show Sunday night in Orlando, and owned the spotlight all weekend long.

Share All sharing options for: LeBron James Owns The All-Star Game Even When He Loses

ORLANDO, FL -- It all happened on the same weekend as the Oscars this year, and that makes sense. NBA All-Star Weekend is nothing if not "Hollywood as hell," so it's only appropriate that LeBron James was at the center of it all this year. If nothing else, All-Star Weekend was a reminder that this is LeBron's league now.

Today's superstars dress like LeBron -- all in plaid button-downs you'd expect to see at a ski lodge, with hipster glasses you'd expect to see in Park Slope. They talk like LeBron -- no generation of superstars has ever been better with the media. And when the camera pans to superstars on the court or in the front row for the dunk contest, they're all joking around with LeBron. They act like LeBron, too. It's no coincidence that two years after LeBron turned the NBA on its head, the biggest story hanging in Orlando is whether Dwight Howard will leave the host city this summer.

Before Sunday night's All-Star Game, when the Eastern Conference All-Stars did their walkthroughs for introductions, I had my back turned when LeBron and the starters finally got on that gigantic All-Star stage. With my back turned, I heard someone yelling, "TWO CHAINZ!"

For the uninitiated: 2 Chainz is a B-list rapper whose name used to be Tity Boi, but over the past six months or so he's gotten all sorts of underground buzz on the strength of mixtapes. And since this was All-Star Weekend, I kinda figured that it was him or someone from his entourage, yelling in the background. But I turned around and it was LeBron, yelling "Two Chainz" over and over and collapsing in laughter each time. Fast forward to the actual All-Star intros, and when Dwight is triumphantly introduced to his home crowd, if you read his lips, there he is shouting "TWO CHAINZ!" just like 'Bron. Obviously.

That split-second is A) definitely another anecdote to add to the endless collection behind all your old "worlds colliding" clichés about basketball and hip-hop, and B) maybe a crushing reality check for someone (me) who grew up when those collisions still felt new and awesome. But more than anything else it was just more proof of All-Star Weekend's lesson this year: for now, most of today's biggest superstars exist, at least in some ways, as mirrors of LeBron.

Sunday's All-Star MVP went to Kevin Durant and the game went to the West, but that's beside the point. It was LeBron who single-handedly turned a 20-point blowout into a last-second thriller, and right now in the NBA, it's LeBron at the center of an NBA galaxy that orbits around him.

But here's the thing -- LeBron is still so LeBron. Sunday night's game almost felt scripted. You had LeBron looking full-on superhuman on a court full of superstars, but after throwing down contest-worthy dunks for the first half and leading a ridiculous comeback throughout the second, it came down to the final minute, and there was LeBron being LeBron again.

I know it's an All-Star Game and it's all meaningless and we shouldn't read anything into it, etc. But think about the flipside. If Bron can't even take the shot in an exhibition game ...

He'd been lights out all night, and suddenly we're passing to Deron Williams? What? 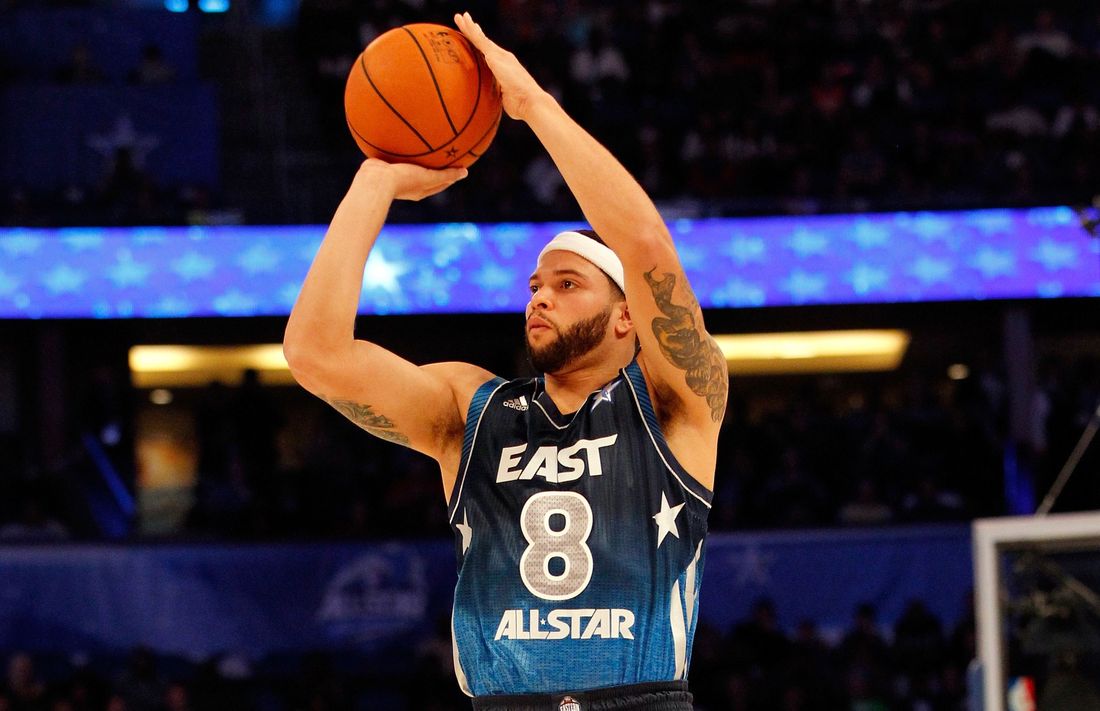 The coup de grace came later, when a reporter asked him about Kobe's trash talk and what Kobe was saying, and LeBron said, "Yeah, he was telling me to shoot it." AND HE STILL DIDN'T SHOOT IT.

"I seen my teammate open for a split‑second," LeBron added. "I told him I seen him open the first time and I didn't release the ball. When I tried to throw it late, that's what usually happens and it results in a turnover. Definitely wish I could have that one back." ... What?

You can say that it's an All-Star Game and nobody really cares, and yeah, you're probably right. But here's the thing: they used to care. Maybe not all game, but definitely if things got tight in the fourth quarter. Somehow that's changed over the years. Not just since the '70s or '80s or whatever other era people want to fetishize. But like, even from 10 years ago. Watch the way the East celebrated in 2001, when Allen Iverson and Stephon Marbury took over and won it themselves. It's not LeBron's fault that things have changed, but he personifies it better than anyone.

He's already in a different stratosphere than even someone like Iverson, but if Kobe were goading Iverson -- or Marbury -- to take a game-winner in an All-Star Game, it'd take an act of God to keep that shot from going up. As much a reminder how far he's come, Orlando was another reminder that LeBron's just wired differently.

And if All-Star Weekend is the place where we get a glimpse into the state of the NBA from all angles, then here's where we are after Sunday night:

Beneath all the inside jokes and elaborate handshakes and general ubiquity, every now and then you still get this feeling that maybe the NBA's being ruled by a King who's just been placed up there by default. Maybe the emperor has no clothes, or something. Or maybe he makes this whole discussion irrelevant one day.

Either way: All-Star Weekend began on Thursday with LeBron's team beating the crap out of the biggest story in the NBA, reminding everyone who's really in charge this year. That theme continued in Orlando, where the best of the best all dress like LeBron, talk like LeBron and clearly kinda look up to LeBron. Next to the biggest superstars on earth, LeBron's from another universe.

Even next to the biggest superstars in history. Bill Russell was 6'9, 215 pounds. Magic Johnson was 6'8, 215 pounds. Michael Jordan was 6'6, 200 pounds. LeBron James is 6'8 and 250. In a practical sense, LeBron's something like the greatest players ever bred with the Incredible Hulk. And watching him dominate for the first two hours Sunday night, everything I saw this weekend made sense. Then the last few minutes happened and the theme had a twist.

Sitting in the Amway seats and watching him the first two hours, I said to myself: "Okay, there's the best player on earth and it's not even close. There's no way he's not winning a title this year." But then I couldn't help but wonder on the way out. "What happens to all this if he doesn't?"