Who is in position to win the No. 1 pick in the 2012 NBA Draft? Which teams will the ping pong balls smile on at the Draft Lottery? We lay out the derby as it stands after All-Star Weekend.

The NBA season is half over, so we're halfway to the 2012 NBA Draft Lottery. The annual event gathers representatives of the worst teams in the league so that a lottery machine filled with numbered ping pong balls can determine who ought to get the first, second and third picks in the NBA Draft. Once the ping pong balls make their decision, David Stern changes it around however he sees fit*, and then we have our draft order.

Every team that misses the playoffs has a shot at the No. 1, No. 2 and No. 3 pick (unless they have already traded their pick, like the 2011 L.A. Clippers). If a team -- say the No. 5 "seed" Toronto Raptors -- doesn't win a top-3 pick, they will either pick No. 5 or lower, should a team behind them in the seeding leap into the top five. So all of the teams below can pick no lower than three picks later than their slot; that would require three teams leaping them in the proceeding. This most frequently happens to the very worst team in the league, who has in the past fallen to No. 4. That said, the two worst teams are guaranteed a top-5 pick, and the third worst team comes pretty close to that guarantee. 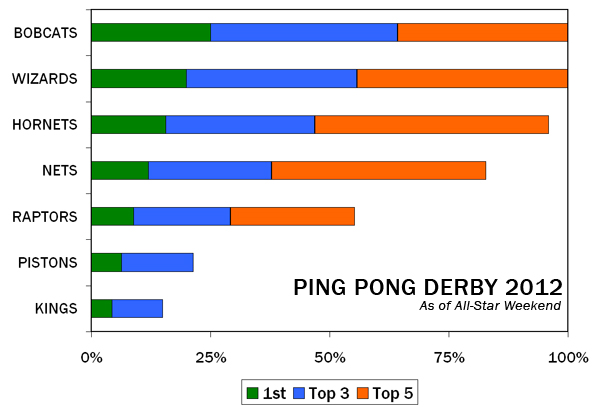 As noted, as of right now the Charlotte Bobcats and Washington Wizards have the league's worst records and would be guaranteed a top-5 pick. The New Orleans Hornets and New Jersey Nets are also looking at a likely top-5 pick right now, while the Raptors have a toss-up between a top-5 pick and the No. 6 pick. The Detroit Pistons and Sacramento Kings have high probabilities of picking No. 6 or No. 7, respectively, or possibly lower. Note that the remaining seven teams that do not qualify for the playoffs will also have nominal chances to win top-3 picks.

Of course, records change. While it's hard to imagine Charlotte being beaten as the worst team in the league, there could be some other changes in the standings. For instance, the Hornets have played the league's most difficult schedule to date, and have done it without Eric Gordon. If the guard returns and New Orleans begins to put together some wins, they could be replaced by the Nets or Raptors in the No. 3 spot. If New Jersey manages to land Dwight Howard, they will careen down the Derby rankings and toward the playoff rankings. That'll open up some room for the Raptors, Pistons and Kings. What happens at the trade deadline could definitely matter as some teams concede and others begin to build for next season.

The prizes are especially rich for the derby winners this season. Anthony Davis is a real gem, expected to go No. 1 overall in the June draft. Other top picks like Harrison Barnes, Andre Drummond and Michael Kidd-Gilchrist will be highly desired by the bad teams. This isn't like last season, where winning the No. 3 pick meant the option to choose between Enes Kanter and Tristan Thompson -- there is some real grist that will affect the future of the NBA here.