Shaq Explains The End Of The Lakers, The Miami Heat, And So Much More

Share All sharing options for: Shaq Explains The End Of The Lakers, The Miami Heat, And So Much More

It may be impossible to separate Shaq's delightful memories of his playing career from his currently insufferable stint on Inside The NBA, but it's worth trying. Just because there's no one else who'd explain the end of the Lakers dynasty by saying, "The young Maﬁa don did it his way and got the Don Dada whacked." There's more over at Vibe, including a section on Shaq's time with Pat Riley and the Heat, and something about his preferred context for erection:

After leaving Los Angeles, you had a volatile relationship with Pat Riley in Miami.

When he ﬁrst came, he was cool as shit. We had short practices, no yelling and we won a championship. The next summer he went back to the old Pat.

He didn’t want you guys in "chill-out mode."

Exactly. But I played better in chill-out mode. I don’t like to come into the party with my dick hard all the time. You have to pace yourself. How many times have you seen a team come out 9-0 and then don’t get close to winning a championship? I like to chill and then get into kill mode about 10 games before the Playoffs. It always worked for me, and I wasn’t going to change my method for no one. He wanted me to eat salad. I’m not going to do that.

Head on over to Vibe to read the rest of the interview. And remember, everyone: Even for Pat Riley, Shaq does not eat salad. And he likes to wait until the playoffs to party with his d**k hard. NOTED. 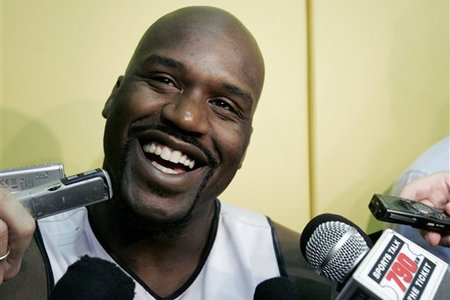