Share All sharing options for: PHOTO: Lou Williams' Bobblehead Will Haunt You

I'm not quite sure the Philadelphia 76ers did Lou Williams justice with his bobblehead. Yes, Williams has a bobblehead, which is great in itself. But the bobblehead doesn't quite live up to the aura of the man himself.

Let's remember who Williams is and how awesome he is. This story will tell you pretty much all you need to know. A gunman tried to rob Williams on Christmas, and ended up praising the Sixers sixth man for his work in the community instead. And then Williams bought the would-be robber dinner at McDonalds. 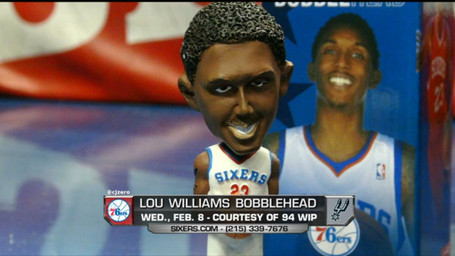 Seems like a rather unfortunate facial expression. But hey, at least he's got a bobblehead!