The New York Knicks weren't even playing at home on Wednesday night, instead visiting the Washington Wizards, but the signs were out for Jeremy Lin. And if this is any indication, the possibilities for Lin signage may be endless. It's a development worth watching as the young man returns to New York to play in front of the home crowd.

We begin with this effort for which we wish there was a photo. Alas, all we have is the bat signal, alerting the world to a hilarious sign.

Asian fan is holding up a sign: "Who says we can't drive?" Tremendous. It's all Jeremy Lin all the time

Behind the bench, there was photographic proof of someone using a rather old meme, updated to fit Lin. This is where Charlie Sheen and Jeremy Lin collide, and we all run and hide. 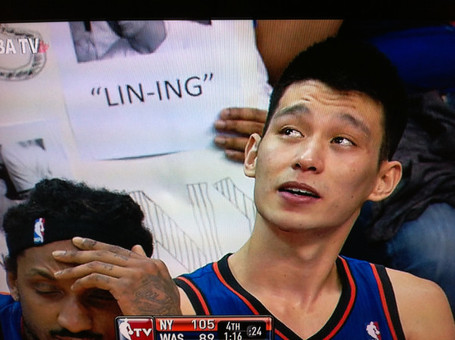 Jeremy Lin's Success With The Knicks Leads To Widespread Linsanity