Why is Jeremy Lin having so much success for the New York Knicks? We break down his game.

On Wednesday, the New York Knicks' undrafted sensation did to the Wizards what he did to the Nets and Jazz, ruining their pick-and-roll coverages to the tune of 23 points and 10 assists. Lin beat the Wizards in so many ways. When they left Tyson Chandler, he found him down the lane for dunks. When they covered Chandler, he found Steve Novak and Landry Fields for three pointers. When they did all that, he just beat the Wizards himself with twisting layups in the lane. All the while, the Wizards looked shocked, with John Wall's wide-eyed look early in the fourth quarter telling the whole story.

"This game was really about containment. We couldn't contain the basketball, basically, I thought, all night long," Wizards coach Randy Wittman said after the game. But why is a point guard who was undrafted coming out of Harvard so impossible to contain in the pick and roll?

There are many reasons:

He stays low to the ground on his dribble

The word many opponents have used to define Lin is "quick." Put Lin in a footrace with Wall, and Lin will get smoked. But because Lin is able to change speeds so well, he's able to be incredibly effective in the pick-and-roll. This much I knew coming into Wednesday.

But why is Lin so quick? I think it comes down to his technique with the dribble. As Wittman noted before the game, Lin is pretty big for a point guard. At 6'3'', he can see over the defense, Wittman said, and that makes him tough. But while Lin is certainly close to as tall as Wall, he plays much shorter.

Look at how low Lin is when coming off a pick and roll as compared to Wall. 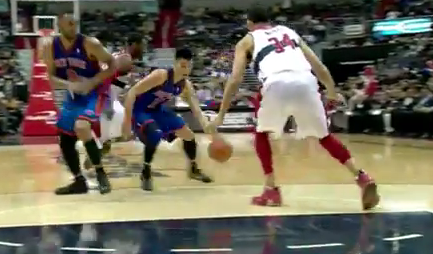 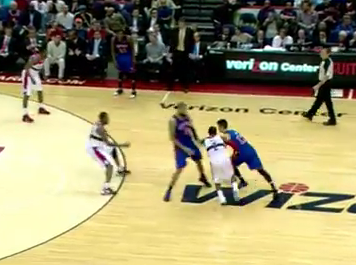 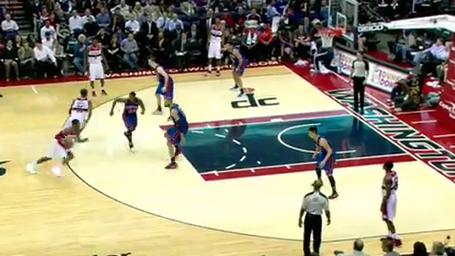 In that second shot especially, Lin's at basically a 55-degree angle to the ground, whereas Wall is at something like an 80-degree angle.

What's the effect of being low to the ground? Changing speeds becomes easier. When Lin wants to accelerate, he can disguise it much easier because he's already so low. Also, he has less ground to cover with his dribble because there's less distance between his arm and the floor. On the other hand, when Wall wants to change speeds, he tends to sit up, then sit back down before driving. In a league where every split second matters, that can often be a wasted motion. Lin has no wasted motions because he's already so low to the ground.

He speeds into the pick, then slows down to maintain the advantage

Lin's approach to pick and rolls is actually somewhat counter-intuitive. Most great point guards go slower into the pick to make sure they rub shoulder-to-shoulder with the screener, then accelerate once they see the advantage. Lin often does the opposite. He runs faster into the pick, then slows down to put the primary defender on his back and maintain the advantage. It's very Chris Paul-ian, and it allows him that extra split second needed to pick the best course of action once the advantage is secured.

"He is coming off with so much thrust and momentum," Wizards forward Maurice Evans said after the game. "if you got a decision to make, it’s either Tyson Chandler for a dunk or Steve Novak for a three-pointer."

One of the reasons most point guards don't speed into screens like this is that it requires a lot of coordination that's hard to teach. They have to time their moves perfectly, because otherwise, their screener will be called for an offensive foul. Lin has great timing on his moves, which is one of his major strengths.

Before the game, Wittman talked about the need to force Lin away from his sweet spot on the floor. Wittman didn't specify what that sweet spot was, but from watching the game, it's clear that spot is on the right elbow. Let's just say the Wizards didn't prevent Lin from getting to that spot.

Once Lin gets to the right elbow, he can finish with his right hand, find a shooter or find Chandler cutting down the rim. The right elbow is key, because Lin is not an especially good finisher with his left hand. But because he's so crafty, Lin can compensate for his weaknesses and get to where he wants to go no matter what the defense may throw at him.

"We put them through maybe 100 pick and rolls," Lin said. "They changed coverages, and we just kept attacking. It's something different every time because the coverages will change."

The Knicks also were smart to mix up the side in which the high pick and roll was set, which allows Lin to occasionally start left, then cross over to get to his right.

One of the biggest things that trips up young point guards is that they don't use their screener well enough. They often start their move too early before the big man is set, and they also veer far too wide, allowing their primary defender to fight over the screen. That's not a problem for Lin. When he comes off a screen, he's very close to his screener, making it very hard for his primary defender to come over the top.

"He understands what I'm trying to accomplish out there," Tyson Chandler said when I asked him after the game. "In the pick and roll, it's all about creating an advantage. When you set a pick on a guard, you're going to knock him off, and now, the advantage is attacking the big and making somebody else that. He does it, and whenever he does it, he finds the right guy."

The idea of creating an advantage is such a simple concept, but many young point guards don't think of it in those terms. Lin does, and it's a huge key to his success.

(Worth noting: Chandler is one of the best screen-setters in the league. That certainly makes Lin's life a lot easier).

Lin's not the best leaper in the world, but he's very crafty finishing around the rim with his right hand. The Wizards often let JaVale McGee hang back on their coverages, thinking he could intimidate Lin at the rim, but it didn't work. Lin has great body control in the air, jumping out towards the shot-blocker instead of jumping straight up. In doing so, he's able to take away the shot-blocker's advantage.

Lin's certainly not perfect, and he won't keep playing this well once the league starts to figure him out. Here are some potential weaknesses he needs to fix:

Nevertheless, the last three games show that Lin can certainly be a starting point guard in the NBA. He has room to grow, but as D'Antoni said after the game, he has all the tools needed to succeed.
"I think it's for real," D'Antoni said. "The things that are for real are his vision, which won't change, his speed, which won't change, and his knowledge of the game, which won't change."
There will be peaks and valleys. There will be stretches where Lin struggles as he searches for ways to adjust to other team's coverages. But as long as he has those three elements to his game, he will be successful in this league.

For more on Lin and the Knicks, visit Posting and Toasting and SB Nation New York.

Jeremy Lin's Success With The Knicks Leads To Widespread Linsanity