Clipper Darrell, Our Latest Reminder That Donald Sterling Is Horrible

"Clipper Darrell" is probably the most famous fan in the NBA, and this week, the Clippers asked him to stop associating himself with the team. Just one more reminder that Donald Sterling and his franchise are one, big embarrassment.

Share All sharing options for: Clipper Darrell, Our Latest Reminder That Donald Sterling Is Horrible

"I don't know where you're listening right now, or who your favorite NBA team is, but this isn't as much about the Clippers as it is about a guy named Darrell who fell in love with a team, and is the best ambassador a sports franchise has ever had."

"It is with great sadness that I must report to all those in NBA NATION that I have been told by Clipper management they no longer want me to be Clipper Darrell, a name that was given to me by the media because of my unwavering support and team spirit. I am devastated!!!!"

This is so stupid.

The details complicate the story, but only a little. The L.A. Clippers have been giving Clipper Darrell free tickets for years now, and in return, he's been the single most vocal fan of any team in the NBA this side of Spike Lee. He was better than Spike, though. Even during a losing season, there's glamor that comes with sitting courtside at Madison Square Garden. Free tickets or not, years of Clippers games is something closer to what Zeus did to Sisyphus.

But it hasn't been all bad. Over the years his commitment and charisma have turned him into a deity among NBA diehards. Atop a pile of broken promises and shattered hopes, Clipper Darrell was always front and center, sticking with the Clippers, looking resplendent in his red-and-blue silk suit, and putting an undaunted smile on the face of a franchise that's spent decades leaving fans, players and coaches shaking their heads in disgust.

It was great. And when the Clippers landed Chris Paul this winter, it was partly Darrell, the face of the long-suffering Clips fan, who helped distract us from the stench of David Stern's Lakers trade veto. Even if you disagreed with how Chris Paul got there, you couldn't help but smile at this:

WELCOME 2 L A @CP3 ...Right now tears are running down my face...YOUR THE BEST!! LOVE YA!!!! someone pinch me i still cant believe this

Nobody deserved to cheer for a winner more than Clipper Darrell, which is what makes this week's news even less defensible. Now, that the Clippers have finally built themselves a contender, they've got no use for Darrell anymore. They've got a team that promotes itself. This is why someone in the Clippers front office apparently got resentful at Darrell's continued relevance.

'Course, that's not how the team explained things. After fans, media and even Clippers players expressed outrage at today's news, the Clippers released a statement saying that in light of the free tickets he's received, Darrell "has not returned our support in an honorable way. He is not actually a fan of the Clippers, but a fan of what he can make off of the Clippers." His crime, in the Clippers' eyes, was making public appearances as "Clipper Darrell" without talking to the Clipper staff. Like these apparently unauthorized appearances last week:

Or whatever appearance fees he may have garnered over the years to show up in character and talk about his favorite team -- more free promotion for a team that hadn't deserved it for decades on end. Or maybe it was the 99-cent red-and-white bracelets he sold on his website that really put the team over the edge. Whatever it was, really. Does anyone honestly believe this man was exploiting the Clippers and getting rich off the returns?

This is like the Redskins telling the Hogettes to stop wearing Skins jerseys. Or like the Jets scolding Fireman Ed about the Jets logo on the side of his helmet. This is so, so stupid.

And this all makes perfect sense, because these are Donald Sterling's Clippers. 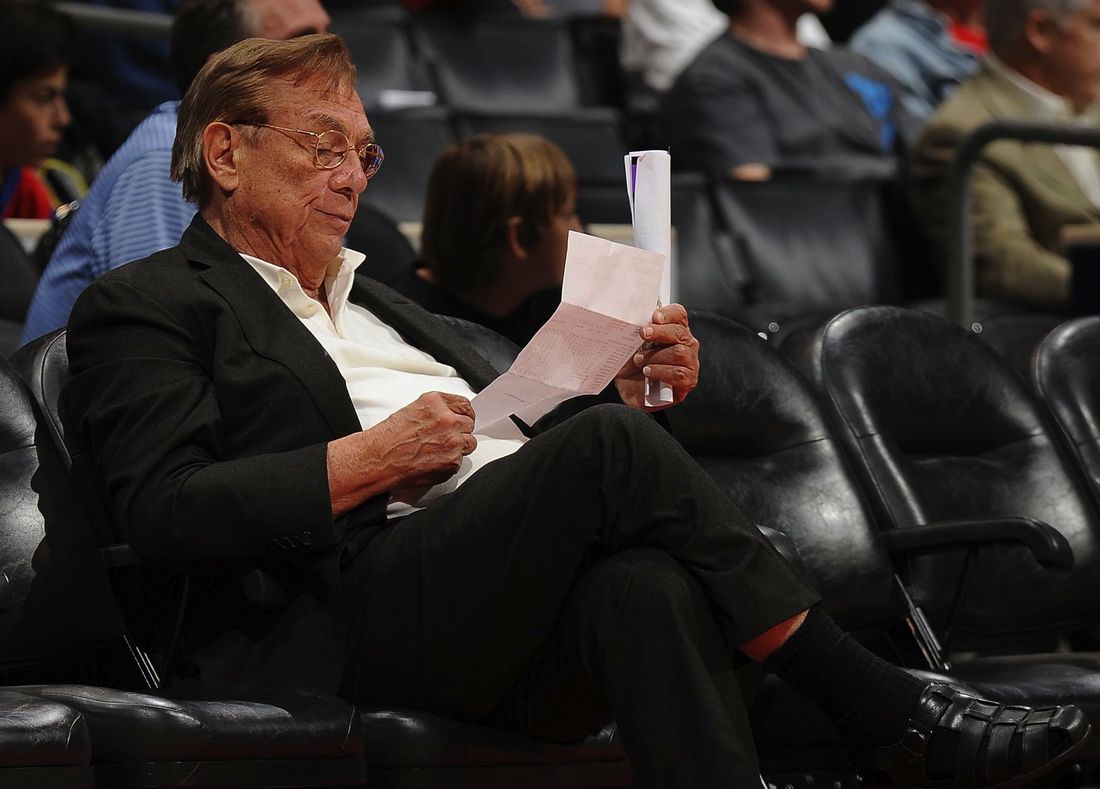 To give you an idea of who we're talking about: Donald Sterling owns an entire building in Los Angeles, but for years chose to keep the building unoccupied beyond his own offices. "Some people think I'm eccentric for keeping Sterling Plaza to myself," he told Sports Illustrated in 2000. "I like riding up and down the elevators alone. It's a luxury I've earned." Then, a few paragraphs later: "I've suffered. Oh, how I've suffered. Do you know what it is to truly suffer?"

It's that sort of audacity that's defined his behavior for decades on end. Especially in light of L.A.'s feel-good resurgence this year, it had been too long since we had a reminder that Donald Sterling is a reptilian disaster of a human being, with only that loose, over-tanned skin hiding the cruelty and pettiness that's lived in his bones for decades.

The stories go on forever, and you've probably heard many of them already. There was the federal discrimination lawsuit he settled last year, where it was alleged he refused to rent property to black tenants. Or his former assistant, who once offered the following anecdote in a sworn deposition, recounted later in an ESPN Magazine profile:

When Sterling first bought the Ardmore, he remarked on its odor to Davenport. "That's because of all the blacks in this building, they smell, they're not clean," he said, according to Davenport's testimony. "And it's because of all of the Mexicans that just sit around and smoke and drink all day." He added: "So we have to get them out of here."

And the discrimination suit brought by Elgin Baylor, which Sterling won, but that still gave the world sections like this:

The NBA and the CLIPPERS used Mr. BAYLOR to induce African American players to join the CLIPPERS, despite the Clippers’ reputation of being unwilling to fairly treat and compensate African American players and STERLING’S pervasive and ongoing racist attitude as expressed to then NBA player Danny Manning during 1988 contract negotiations when he said, "I’m offering a lot of money for a poor Black kid"

Repeatedly during Mr. BAYLOR’S tenure, Plaintiff was told by Defendant STERLING that he (STERLING) wanted the CLIPPERS team to be composed of "Poor Black boys from the South" and a White head coach.

Makes you wonder whether anyone's ever shown them Baylor's lawsuit to Chris Paul — the point guard from Lewisville, N.C., — or Blake Griffin — the forward from Oklahoma City — and let them in on the plan to build a winner around "poor black boys from the south."

There was also the 2003 deposition where he talked freely of cheating on his wife, saying, "It was purely sex for money, money for sex, sex for money, money for sex." When asked if he'd ever referred to the woman in question as "honey", Sterling said, "If you are having sex with a woman you are paying for, you always call her honey because you can't remember her name."

But you know... for all the spectacle of his worst moments, it's the day-to-day contempt for decency that really defines someone like Sterling. For instance, there's this story from the Sports Illustrated article above, where a sportswriter's widow solicits money for charity:

Every pro franchise in California, according to McCoy-Murray had forked over at least $5,000 to her foundation, which provides journalism scholarships. Sterling offered McCoy-Murray two season passes. "You know, that's wonderful," she remembers telling him. "but we're trying to endow a college scholarship fund. We could really use cash."

"Fine," she said. "We can use the tickets for our silent auction. But would you also consider donating $5,000?"

Sterling said he would mull it over and call her the following week. He never did. Nor did he send over the season passes.

Or the way he would allegedly bring his dates into the Clipper locker room to admire his employees while they showered, saying, "Look at those beautiful black bodies." Or the one-time female employee who told ESPN Magazine that "working for Donald Sterling was the most demoralizing, dehumanizing experience of my life." Or Kim Hughes, the ex-Clippers assistant coach who in 2004 was told the team wouldn't cover insurance for his prostate cancer surgery. "They said if they did it for one person, they'd have to do for everybody else," he remembered last year.

Of course, amidst all this, David Stern plays blind and deaf. While Stern's regime has spent the last decade using suspensions and dress codes to airbrush pro basketball into an image of his own making, the most deplorable human being in all of sports prospers year after year in the NBA. And there he is this year, counting more money than ever with the team borne from Stern's benevolence.

Next to all this karmic injustice, what happened to Clipper Darrell is nothing special. The way he's been treated by the Clippers just reminds us what we already knew. But that's important, too.

No fan in sports embodies the hopeless, hilarious naivete that keeps us coming back better than Clipper Darrell. And as this week's made it clear: Even if the whole world loves Chris Paul, Blake Griffin and the rest of Lob City, no team in sports personifies franchises' blatant disregard for fans better than Donald Sterling's Clippers.

The Clippers have done absolutely nothing wrong or inappropriate as it concerns Darrell Bailey. His claims are absurd and unfounded. He has never been an employee or representative of the Clippers organization, and therefore cannot be terminated. The Clippers have never engaged Mr. Bailey’s services. When he has been in need, the organization has regularly provided him a seat for games. No good deed goes unpunished.

— A statement from the L.A. Clippers regarding Clipper Darrell Bailey

In a legal sense, yeah. The Clippers haven't done anything wrong or inappropriate this week. But it's the audacity of that last sentence that really brings Sterling to life. When the franchise that deserves an ocean faces even an ounce of backlash, the management can't resist playing the victim. Even if it means painting their biggest, most loyal fan as ungrateful fraud.

Earlier this week I'd defended the Clippers when others were saying that we should be rooting against them because of their owner. If we rooted against teams because of their selfish or callous owners, I thought, we'd be rooting against a lot of teams. But the situation with Clipper Darrell had me doing a double-take, and helped me appreciate the unparalleled spectacle of revulsion that Sterling's put together in L.A. He really is in a league of his own.

Who knows whether the Clippers will fix all this in the next few days, weeks or months. This is stupid, but for now, one thing's certain. The Clippers' only "punishment" in all this is a PR disaster that may prompt fans like me to take another look at the Clippers' history, and may make Donald Sterling's franchise the temporary enemy of NBA fans everywhere. On that front, then, this all makes sense. Clipper Darrell's favorite team has had it coming for a long, long time.