The story of Trayvon Martin, a 17-year old Florida high-school student that was shot to death by self-appointed "neighborhood watch captain" George Zimmerman despite only having a pack of Skittles and a bottle of iced tea on him on February 26, has become a hot-button national issue, with many people expressing support for Martin and calling for justice with Zimmerman. Now, "many people" includes the members of the Miami Heat.

Led by LeBron James, the Heat showed their support for Martin by taking this picture of them wearing hoodies, which is what Martin was wearing when he was shot. 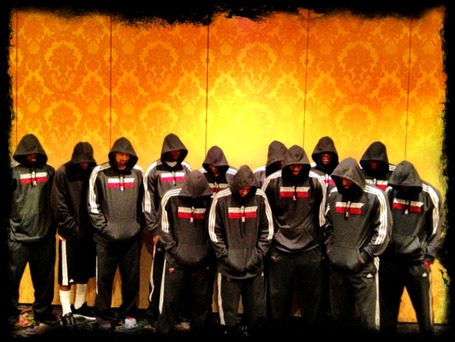 Say what you want about James the basketball player and the supposed on-court arrogance of the Heat, but this was a pretty courageous gesture. Professional athletes so often are scared to speak up about these kinds of stories because they are worried about the backlash. James and the Heat, however, realized that showing solidarity for the death of an innocent teenager is worth all the backlash they may receive.

Here's hoping more athletes are willing to pledge their support for Martin like this.