You've probably seen the photo of LeBron James and the Miami Heat donning hoodies in protest of the Trayvon Martin shooting. If you haven't yet, do take a look at the image he tweeted earlier on Friday. It's powerful and absolutely worth your attention.

But the hoodies weren't all LeBron had in mind. Instead, it was just the beginning, and rumblings of a second show of support popped up throughout the day. Turns out LeBron did pay tribute to Martin a second time, doing so with a few words on his shoe during the evening's game. 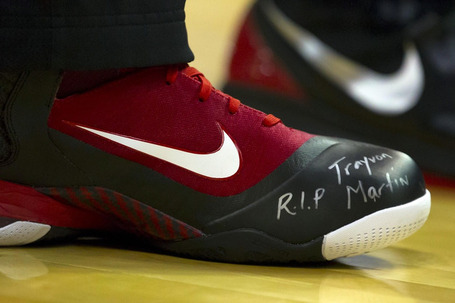 It might seem small, but scrawling "R.I.P Trayvon Martin" on his shoes says a lot. That LeBron -- and his teammates, as well -- took a stand sends a powerful message. He could've ignored the controversy or shied away from it, but instead faced a huge social issue head-on and came out swinging.

Sports and politics generally don't mix -- one being an escape from reality and the other tackling many of the issues facing society. And yet here's LeBron and the Heat doing something, attempting to send a message without fear of repercussions. It's certainly worthy of praise, and here's hoping LeBron and the Heat continue to push the issue. 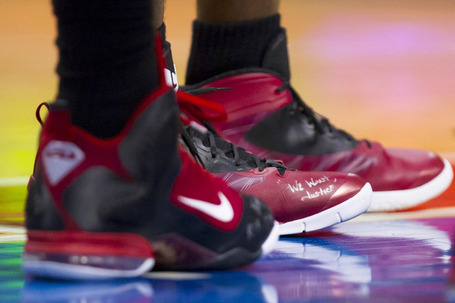