Tim Duncan Tagged With A DND-Old

Share All sharing options for: Tim Duncan Tagged With A DND-Old

This has to be a joke gone horribly ... right. Tim Duncan did not play on Sunday night, which isn't all too newsworthy. However, the reason he didn't play is both newsworthy and hilarious.

You see, next to the "Did Not Play/Dress" in a typical box score, there's a reason. It can range from the dreaded "Coach's Decision," which usually means a player is in the dog house or just wasn't deemed useful that night, to specific injuries. Tim Duncan, however, was tagged with a DND-Old, and it's amazing.

From the NBA.com box score:

I'm assuming the Spurs wanted to rest Duncan as they get ready for the stretch run. And yeah, he is rather old in a basketball sense. So maybe someone at NBA.com was having fun. Or, perhaps, someone doing the paperwork for the Spurs decided to make a joke that has now gone viral.

Either way, this is the most fantastic box score.

Edit: Not the first time a Spurs player was listed as old. From the wayback machine: 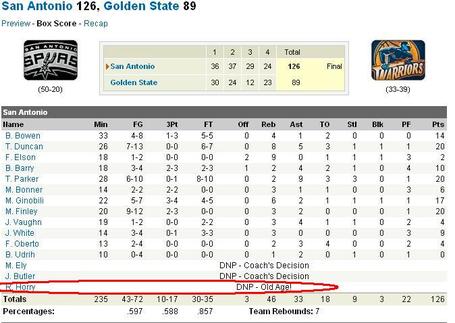 And it also happened to Grant Hill (against the Warriors, no less). The backstory for that one can be found here.