Kevin Durant Is The NBA's Most Improved Player

It would be a strange choice given how the award has been applied over the years, but Kevin Durant really deserves to win the Most Improved Player award.

Share All sharing options for: Kevin Durant Is The NBA's Most Improved Player

Unless the voters put too much weight into what transpired in the Oklahoma City Thunder's win over the Miami Heat on Sunday (which is entirely possible), Kevin Durant won't beat out LeBron James for the Most Valuable Player award. He shouldn't, really, because James' statistical dominance is so overwhelming.

Still, what Durant has done to raise his game is both stunning and subtle. Therefore, here's a proposal: why not name Durant the NBA's Most Improved Player?

Fundamentally, Durant is still the same scoring assassin he was last year, but those subtle differences matter so much. Not only is Durant scoring at a more efficient clip than ever before, but he's also dramatically improved his playmaking, defense and ability to get open. Before, Durant was a great scorer with some weaknesses in his game. Now, Durant is a great scorer with no weaknesses in his game. That kind of improvement is amazing.

It would have been very easy for Durant to accept his destiny as an elite scorer. Durant's shooting percentages were a bit down in 2010-11 as teams adjusted their defenses to stop him, but they were still outstanding. So long as Durant is 6'10 with arms as long as a giraffe's neck, he'll be able to score.

In this case, though, it's what Durant is doing before and in addition to hitting all those shots that tells the story. Last season, teams were able to slow Durant by bumping him as he made his cuts. They forced Durant to catch the ball far away from the basket and crowded him to take advantage of his average dribbling skills. Durant is 6'10, but against many top defensive teams, he played like he was five inches shorter. He started to rely so heavily on others to set him up that it opened a void that Russell Westbrook needed to fill to create offense off the dribble. Teams also knew they didn't have to worry too much about Durant setting up others -- at least relative to many of his peers -- and they attacked him defensively to wear him out.

Most superstars encounter these challenges at some point during their careers, but they usually take a little while to conquer them all. Durant, however, has solved all of these weaknesses in one season. Consider the following:

Stepping Up On Post-Ups

Finally, Durant's starting to act like he's actually bigger than the man guarding him. Last year, Durant averaged just 2.06 post-up chances per game, according to MySynergySports.com, and shot just 39.7 percent in those situations. This year, Durant's up to 2.47 post up plays per game, and he's shooting 45.5 percent in those situations. In 2010-11, he was 101st in the NBA in points per possession on post-up attempts. This year, he's 33rd.

What's caused the change? Durant decided he couldn't function as merely a skinny dude anymore, so he bulked up. He also copied elements of Dirk Nowitzki's game; while most focused on his early attempts to mimic Dirk's one-legged fadeaway, few noticed the way Durant now uses his body to shield defenders and carve out post position is reminiscent to the way Nowitzki so easily set up shop on the left block in the playoffs last May.

Those two changes now mean that teams can't stick a little guy on Durant anymore. Doing that requires teams to send help, which leads us to our next improvement.

It's not that Durant was awful at getting his teammates involved in the past, but he certainly wasn't elite. That has changed this year. Durant's assist percentage, which measures the percentage of Thunder plays that end with a Durant helper when he's on the floor, has jumped way up to 17.7 percent this year. Prior to this season, his career high was 13.5 percent, which he achieved twice.

To put that number into perspective, here's a list of forwards that have a better assist percentage this year, per Basketball Reference:

By this one stat, Durant is way up there with the very best passing forwards in the game. Suddenly, teams have to be more careful to double-team Durant, because he will find the open man. That only makes it tougher to stop him from scoring himself.

Creating on his own

By contrast, Durant is relying far less on others to set him up than ever before. One of the bigger knocks on Durant last year was that, for all his offensive talent, he relied too much on other players getting him shots. Over 62 percent of Durant's baskets last year were assisted, according to HoopData, which is great for a role player, but problematic for a primary star. That shortcoming forced the Thunder to tailor their offense toward pindowns and other screens designed to get Durant open. Given the one-on-one talents of Westbrook and Harden, this was a bit of a waste.

This year, though, things have changed. Durant is being assisted on only 47 percent of his made field goals, a number way lower than any he's posted throughout his career. The difference comes from Durant working tirelessly on his ball-handling. No longer is Durant a liability when trying to dribble in traffic. Now, he can maintain control of the ball while powering through defenders with his newfound strength. His turnover percentage is up a bit, but such a jump is understandable when he's both passing and dribbling more than ever before.

Durant's hardly a lockdown defender, but given his enormous offensive responsibility, all you can really ask is that he holds his own at his position and doesn't compromise the Thunder's schemes. He's doing that and more this year, especially in isolation settings. According to MySynergySports.com, opponents have tried to score on Durant in isolation situations 82 times this year. They've made 16 shots and drawn a foul seven times. That's 23 positive conversions out of 82, good for just a 24.2 percent success rate that ranks Durant 11th in the entire league.

Durant's overall defense has improved as well. He has been involved in 506 defensive plays this season, and his opponent has scored or been fouled on just 34.2 percent of those plays. That's good for 82nd in the league, which isn't the very top of his class, but is certainly up there.

It's also not like Durant has been hidden against bad offensive players. On Sunday, Durant was directly involved in defending 12 of the Heat's 98 total offensive plays. The Heat were 2-11 with one turnover in those situations. Eight of those 12 plays involved James, and James' only made field goal came on a one-legged, 16-foot fadeaway that looked like this. 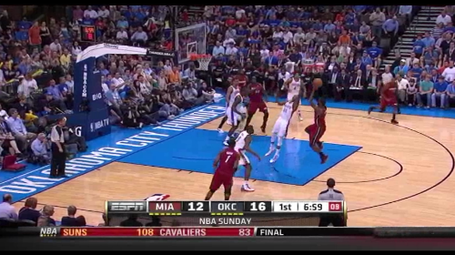 It might be a bit much to call Durant an elite defender like Tony Allen, but he's certainly well above average. You couldn't say that last season.

In practice, Durant will never win the NBA's Most Improved Player award. The honor seems earmarked for Jeremy Lin, because we're so used to giving the award to guys who merely become relevant when given the opportunity. But while Lin's rise is a great story, he hasn't made the ultimate jump that Durant made this year. Lin went from a nobody to a somebody. Durant went from a household name to the second-best player in the league. Which is more impressive?

Think about it this way. Last year, Nowitzki carried the Dallas Mavericks to a championship, culminating a decade-long journey that saw him go from being a superstar to being unstoppable. Nowitzki's 2011 playoff run occurred because he slowly added more elements to his game, developing counters for every defensive strategy and shoring up his non-scoring weaknesses. But those improvements didn't happen overnight. They were four years in the making following his 2007 playoff failures.

Now, consider that Durant has addressed literally every single element in his game that caused him to underwhelm last year by his standards. All this happened in one offseason. Not four years. One prolonged offseason.

If that's not the definition of most improved, I don't know what is.