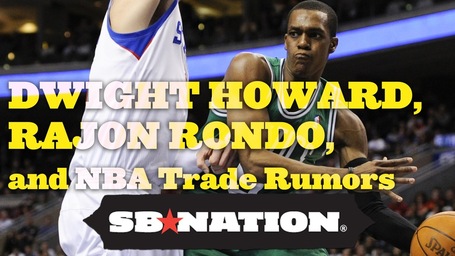 The NBA Trade deadline is less than a week away, and with Dwight Howard on the trading block, the Boston Celtics looking to rebuild, and the Lakers needing help pretty much everywhere, there is plenty to talk about. So what happens next?

SB Nation's Erin Sharoni talked to a couple of NBA experts about some trade rumors swirling around the NBA right now, and aside from one really good-looking guy in a yellow sweatshirt, you can also look forward to some talk about Dwight Howard, Rajon Rondo, the problems with the Portland Trail Blazers, and some of the teams in the Western Conference who'll be looking to make moves over the next week.

You can subscribe to SB Nation's YouTube Channel here, and if you're looking for in-depth coverage, read more about the trade deadline with Scott Schroeder's daily rumors roundup and Tom Ziller's team-by-team deadline previews. Both of those have been fantastic.