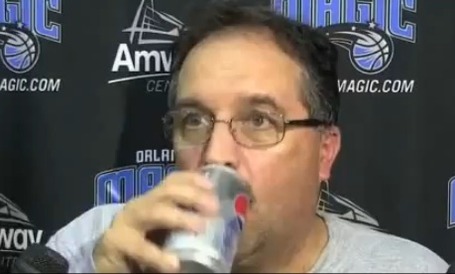 Stan Van Gundy and Diet Pepsi. They seemed to be a perfect match.

The Orlando Magic coach made the low-calorie soft drink the star of one of the most super viral and incredibly awkward press conferences in NBA history. But no one from PepsiCo Inc. has called SVG about an endorsement deal. What a shame — or so I thought.

Guys, there's something you need to know about Van Gundy and his relationship with Diet Pepsi.

"He kinda goes between Diet Pepsi and Diet Coke sometimes," Magic center Daniel Orton dished. "Somewhat of a traitor actually. No brand loyalty at all."

More: Most Awkward Press Conference Ever | Why SVG Is The Anti-Dwight

Orton said Diet Pepsi does seem to be SVG's favorite, but Orton doesn't know if Stan likes it enough to attach his name to the product.

So what else could Van Gundy sell if he's not shilling diet cola?

Orton offered, "Maybe something with his mustache, I guess."

Hm. I like it. Just spitballin' here, but SVG definitely has what it takes to be a Master of Style.

A plea: Embrace the meme, Stan. You could do for the upper lip what Hillary Clinton is doing for tumblr.

For more on the Orlando Magic, visit Orlando Pinstriped Post

Oh, and here's the original video if you need a refresher: