NBA Draft Lottery Watch: You Are Now Watching The Throne

The Sacramento Kings are showing the dregs of the NBA how this tanking fortuitous sucking business is done.

Share All sharing options for: NBA Draft Lottery Watch: You Are Now Watching The Throne

We are one week closer to the merciful end of the season for the NBA's worst teams, and one week closer to the fateful day in which destinies will be written by 14 God-forsaken ping pong balls in a motorized hopper in Secaucus, New Jersey. One champion will emerge from that air-conditioned room with the right combination to claim its prize: Anthony Davis. Others will receive dice as parting gifts; they can roll them when the NBA Draft rolls around in June.

The determination of who the odds shall kiss remains to be made. As such, challengers continue to jockey for any edge. The Sacramento Kings know this game better than most, having played it for (checks calendar) six years now. The Kings know just what to do.

And that is why the team is on a six-game losing streak.

(Actually, the team just kinda stinks, DeMarcus Cousins is losing steam and Marcus Thornton was out for a number of those games. But since all the world is raging at the concept of tanking, it seemed like the right accusation to make.)

Here's a look at this week's Lottery Watch, starring the un-resurgent Kings. 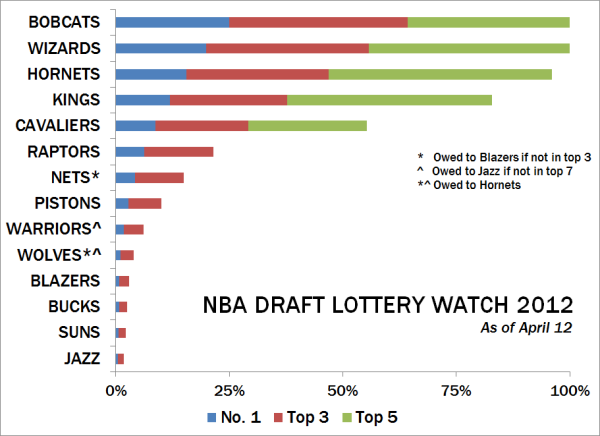 That's right: the Kings are in line to finish with the league's fourth-worst record. If that happens, it will make the fourth straight season that Sacramento has finished with a bottom-five record. (Their highest pick in the last three drafts, mind you? No. 4. The bad luck is pretty unbelievable.)

Were it not for one crucial detail, you might accuse the Minnesota Timberwolves of tanking. Since losing Ricky Rubio and their raison d'etre, Minnesota has sunk like a plutonium anchor. But you can't accuse the Wolves of tanking ... because they don't own their first-round pick. That's going to the New Orleans Hornets. (Would we put it past David Kahn to tank for better second round draft position, though? Hmm.)

But don't fret: there is a 100 percent probability that the top 10 of these teams will continue to suck for the next couple weeks. Wee!