Steve Nash, Stepping Back And The Brilliance That's Hard To Understand

Steve Nash is having another spectacular season, willing a mediocre Phoenix Suns' roster into the NBA playoff picture. This year's brilliance, though, is a bit different than years past.

Share All sharing options for: Steve Nash, Stepping Back And The Brilliance That's Hard To Understand

The 2011-12 Phoenix Suns have no business being a playoff team. Suns fans may object to some of these descriptions, but let's think of their team in these ways:

And yet, here they are, in eighth place in the Western Conference with only a few games left to go in the season. When the All-Star Break hit, the Suns were 14-20. They've gone 18-9 since, despite playing 17 games against teams fighting for the playoffs. Their run may come to an end soon -- with games against the Thunder, Clippers, Jazz, Nuggets and Spurs left, it's going to be tough to keep their spot -- but it's still quite an accomplishment that they even got this far. However you feel about this supporting cast, the impact of a difficult-to-define term like "team chemistry" or whatever other buzzwords you choose, this is a team outperforming its own talent.

The engine driving this all, of course, remains Steve Nash. I could say that Nash is having another outstanding season and is one of the great wonders of the basketball world, but so could you, and I'd therefore be wasting your time. At age 39, Nash has a ton left in the tank, and he probably could play another three years like he often says.

But what strikes me as intriguing about Nash is that this isn't the same Nash we're used to seeing. Perhaps that's tough to visualize at first glance, but this Nash is slightly less involved than he used to be. It's a subtle change, because we're still talking about a player that assists on a staggering 53.8 percent of his team's possessions, but despite his Suns lacking the kind of offensive talent of year's past, Nash has taken a bit more of a backseat.

A couple things jump out at first glance. His usage rate, which measures the percentage of possessions he ends with a shot, foul drawn or turnover, is down at 19.5 percent, his lowest figure since 2003-04, his last year in Dallas. His minutes are down to 31.9 a contest, his lowest since 1999-2000. He's averaging just 2.5 free-throw attempts per 36 minutes, also his lowest since 1999-00. 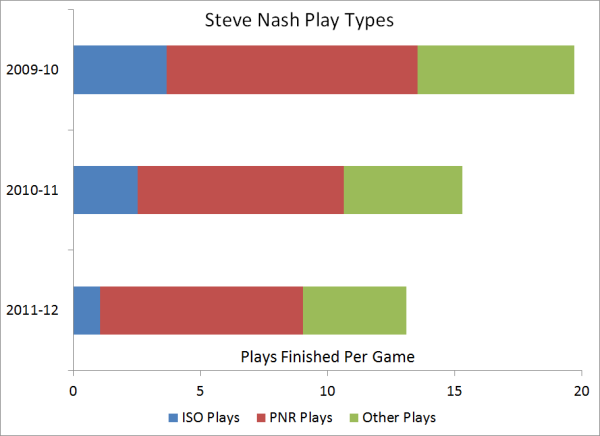 The percentage of Nash plays that end via him shooting on the pick and roll have actually gone up, but the major drop in isolation finishes shows the changing nature of Nash's game. In the past, he might have taken the 16-foot fadeaway jumper when no other shots were there. Now, he lets other players take care of the possession more when things break down.

All these things are happening despite the lack of surrounding talent described above. More than ever, this Phoenix Suns team needs Nash, at least on paper. Two years ago, Nash could theoretically rely on Amar'e Stoudemire, Jason Richardson, an elite bench and a version of Robin Lopez that was actually good. This year, it's Marcin Gortat, Jared Dudley, a bench of no-names and the bad version of Robin Lopez. You'd think Nash would be more involved with the latter group than the former one, but that is not the case.

The easy answer is that Nash is declining, and to a certain extent, he probably is. No matter how well Nash takes care of himself, he's still chasing the reality that he has played nearly 36,000 regular-season minutes and over 4,200 playoff minutes in his career. Father time is nicer to athletes that take care of themselves, but it eventually wins out.

At the same time, given the Suns' success in the second half of the season, would it be too much of a stretch to say that Nash has reached the final frontier of on-court aptitude? For years, Nash succeeded by doing everything in his power to give his teammates fish. He dribbled around all areas of the court, while everyone else just had to get open and be fed. There's still a lot of that now, but there's also a lot of instances of Nash also teaching everyone how to fish. He'll provide the food on the first few plays, but perhaps he's now inspiring more offensive confidence out of players, getting them into a rhythm early and letting them take on more late.

If this sounds abstract, it's because I really don't know how else to explain it. All I know is that Phoenix is 18-9 since the All-Star Break and keeps finding their way back into the Western Conference playoffs picture despite a lack of on-paper talent and so many obstacles. They're there even as Nash takes a small step back in how much of the load he shoulders. Put two and two together, and how else to explain it besides suggesting that there's some way Nash is bridging the gap that I don't understand?

Nash has always been a play ahead of everyone on the court. This season, as his role has started to diminish with age, his on-court intelligence and off-court demeanor has kept him and his team going strong. I may not be able to understand why he makes it work, but I sure as hell will be rooting for him to keep it going in the playoffs.

For more on Nash and the Suns, visit Bright Side of the Sun and SB Nation Arizona.