NBA Talking Points: How The West Will Be Won, Paul Silas Ain't Scared, And All Eyes On Melo

As the NBA Playoffs approach, let's take a look at the Western Conference standings, where the Clippers, Lakers, Spurs, and Thunder are all battling it out to the bitter end. Plus: Paul Silas, Derrick Rose and Obama, Dwight Howard, and all eyes on Melo.

Share All sharing options for: NBA Talking Points: How The West Will Be Won, Paul Silas Ain't Scared, And All Eyes On Melo

We're in the home stretch of the NBA regular season, but the West could go a million different directions right now. The eighth spot is still up for grabs between the Jazz, Suns and Rockets, and the Mavericks and Nuggets are jockeying for position between the sixth and seventh spots, and then there are two races that could go a long way toward carving out what happens over the next six or seven weeks out West.

WHERE THEY ARE NOW

WHAT THEY HAVE LEFT

It comes down to this: Would you rather play the Lakers/Clippers, or the Grizzlies? The Thunder have proven they can beat the Lakers (2-0 this year), but the Grizzlies took 'em to the brink last year and would probably do the same again in the second round.

As for the Spurs, they obviously remember what happened with Memphis last spring, but they're 3-0 against the Grizz this season, and Manu Ginobili is healthy, which changes everything for them. Meanwhile, their front line got abused by Andrew Bynum for 30 boards last week, and the Lakers are looming as the secretly tougher matchup. (If they have to play L.A., they'd be much better off facing a Lakers team coming off a seven-game series with Memphis than L.A. after a five game series vs. the Mavericks or Nuggets.)

So if both teams could choose their destiny, they'd probably choose exactly where they are now. The Spurs have the tiebreaker if it comes to it, but each team plays the Lakers this weekend. Since the rest of their schedules are filled out with tankeriffic teams (and the Nuggets), what happens in those Lakers games could decide this race. In a weird way, the Thunder might be better off losing.

Then, there's the Lakers and Clippers.

WHERE THEY ARE NOW

WHAT THEY HAVE LEFT

Whichever team wins this race slides into the third seed, and neither wants to get stuck in the fourth spot, where they'd be going to war with the Grizzlies in the first round.

The Clippers-Suns game tonight should be crucial (remember, the Suns are playing for the eighth seed), and if the Clips take care of business, they'd have three winnable games down the stretch, especially since the Knicks will probably be locked into a playoff slot by the final game. In that case, the Lakers probably have to win both the Spurs and Thunder game to keep pace.

Big picture: Whether they get the three or four, the Clippers aren't as much of a threat in the West. They don't defend well enough, and Blake Griffin will get exposed in the halfcourt offense that comes with close playoff games. In a seven-game series, they'll probably be underdogs against Memphis, San Antonio, the Lakers, AND Oklahoma City. The Lakers are a different story.

So, yeah: If the Clippers win in Phoenix Thursday night and put the pressure on their crosstown rivals, the Lakers games this weekend could go a long way toward telling us whether we've got three Finals contenders (Memphis, OKC, San Antonio) or a four (with a pair of Lakers wins throwing L.A. into the third seed and putting Kobe into the mix).

Does that make sense?

While we're here, elsewhere in the NBA...

DO NOT MESS WITH PAUL SILAS

The Bobcats are wheezing their way to the finish line and will almost definitely finish the year having lost 23 straight games. It's been an impressively disastrous year for the Bobcats. You know this. By now you've probably seen the story from Adrian Wojnarowski about 68 year-old Charlotte coach Paul Silas getting physical with Tyrus Thomas in the locker room, so there's no need to dwell on that further.

But let's just take a moment to appreciate the sheer badassery of a 68 year-old coach challenging a 25 year-old professional athlete to a fight. And more importantly, let's look back to a 1967 court case that centers on a young Paul Silas. Silas is "plaintiff" here.

A shotgun, you say? PAUL SILAS AIN'T SCARED OF NO SHOTGUN.

Important note: This was 1960s South Carolina and Silas was shot, so it's safe to say that we're dealing with some pretty thick racism and one-sided testimony here. But still. The most important point here. PAUL SILAS AIN'T SCARED OF NO GODDAMN SHOTGUN. 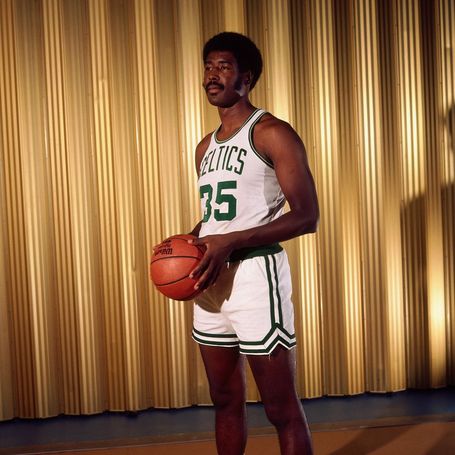 What I'm saying is ... we should appreciate Old School Paul Silas way more than we do.

This is a few days old, but stuff like this is why we'll miss Kobe forever. Here he is remembering a discussion of war and peace with the artist formerly known as Ron Artest.

"Me and Metta had a conversation after the Clippers battle that we had at the Staples Center, there were like 100 scuffles in the game and Metta was involved in pretty much all of them. We were talking after the game at dinner and I said ‘Metta do you know, first of all World Peace is a hot name, it’s a dope name.’ Then he started looking at me out of the corner of his eye and was like ‘okay where are you going with this?’ I said ‘some people believe for us to achieve world peace the only way that can be achieved is through sheer will and through force of nature so sometimes you just have to go and conquer the territory and that’s when you establish world peace.’"

Kobe's not going to retire for four or five years, but I kinda miss him already.

DWIGHT HOWARD IS STILL THE BEST/WORST

"No, I'd be surprised. Very surprised," said Stan Van Gundy when asked if he expected Dwight Howard back before the playoffs. "Our approach is that this is our team, not only in the regular season, but in the playoffs. If we get him back, obviously it would be a huge bonus, but we're not expecting that at this point."

Just sayin': Dwight Howard has never missed extended time in his career. Now, he just happens to go out for the season (and the playoffs) after his coach calls him out publicly? Alright then.

GQ's Derrick Rose profile had a lot of things to love, but this was my favorite part.

One Chicago icon for whom Rose does genuflect? President Obama. The famously Bulls-crazy POTUS has an open dialogue with Rose. "I know that if I really wanted him to come out and support an event I'm going to in Chicago," Rose says, "I know it could probably get done."

Last year, the president asked Rose to introduce him at a fund-raising event. Rose sweated it in a way he's never sweated a game. "That was my first time ever speaking to that type of crowd," he says. "I was so nervous and scared. Just a two- or three-minute thing, but, like, thousands of people were there. I was nervous as hell...but I got it done, and it helped me being more vocal, too, by doing that." One difference between Rose and other athletes who have palled around with the prez is that Rose has known him since back when. "I remember when he wasn't our president, when I was a kid, when he'd just be walking down the street, a state senator. He was just always there. I didn't appreciate it then. I was in high school and just wanted to see rappers."

Not to detract from the rest of the profile, but can we please get a 5,000 word profile of Derrick Rose that focuses solely on his relationship with Barack? What do they talk about? Do they hang out in Chicago? Does this mean Derrick Rose is #illuminati, too? America needs to know more. 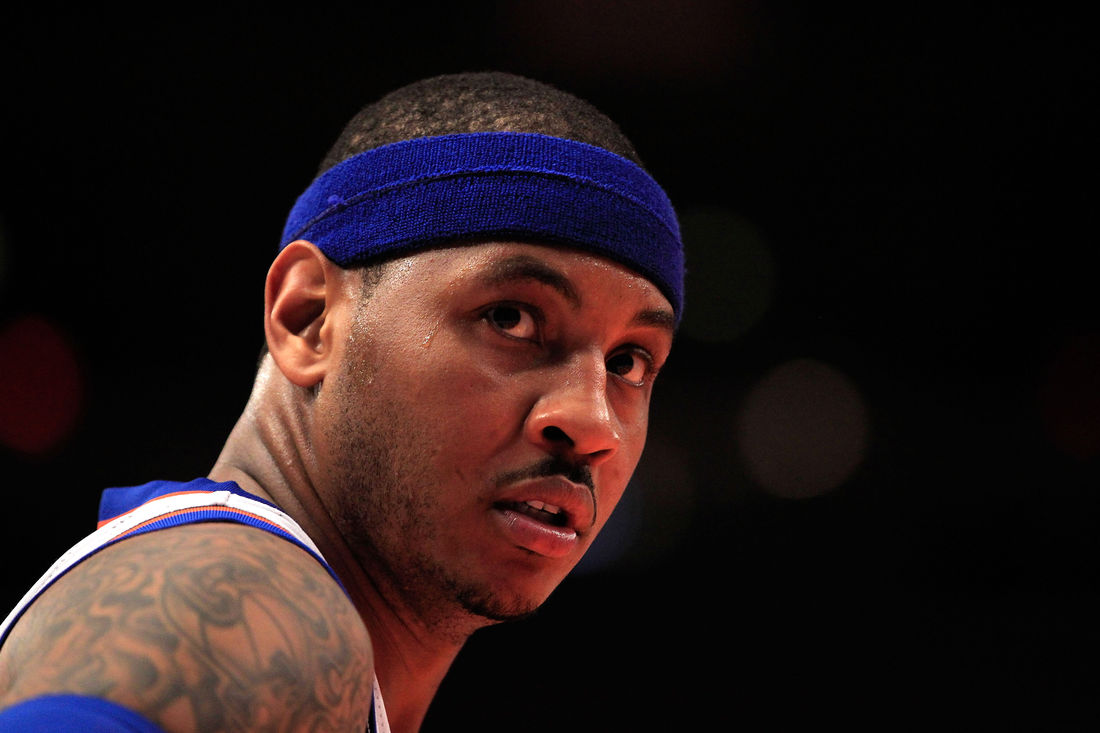 Carmelo's had a fun couple of weeks, hasn't he? There was his phenomenally random cameo on "Nurse Jackie," we just found out he has a portrait of himself in his living room, he's been absolutely murdering people on the court and he's the King of New York again.

He scored 21 points in the first quarter Wednesday night, had a triple double Tuesday, nearly took down Miami on Sunday, and as the craziest season of his career winds down, he looks completely unstoppable. If this were Jeremy Lin, the world would explode.

But it's Melo, so it matters exactly as much as LeBron's Superman performance against the Nets the other night. Which is to say: "Great, but let's see what happens in the playoffs."

As far as THAT'S concerned... right now the Knicks look headed for the seventh seed and a date with LeBron and the Heat. And I'm just sayin'... Carmelo's been through the lowest of lows this year, but just when everyone wrote him off for good, we're looking at a superstar hitting on all cylinders.

Think about the year he's had.

He started slow, and while he labored through injuries, the Knicks looked like the most miserable team in the league. Then he finally went on the shelf for a few weeks, Linsanity happened and he came back to join the form the predictably dysfunctional duo in the league (Lin + Melo), turning himself into the stereotypical cancerous superstar trampling on the best story in sports. Then he indirectly got his coach fired (living up to the stereotype), and now, with Lin and Amar'e out indefinitely and the Knicks entirely dependent on Melo, he's playing the best basketball of his life.

We don't know what happens next here, but Melo looks better than ever, and he's about to take center stage. There are a lot of reasons to be excited about the NBA Playoffs, but after the past three weeks, watching Melo against Miami has gotta top the list, right?